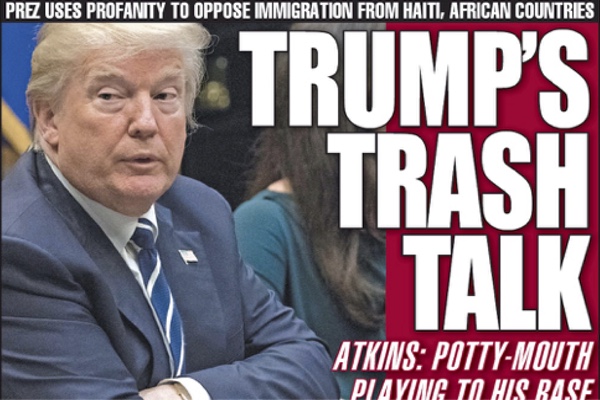 On Thursday, January 11, during a discussion of immigration with congressmen from both parties, the President of the United States was reported to have asked, “Why are we having all these people from shithole countries come here?” Such “shithole” countries included Haiti and a number of nations in Africa. The social media universe lit up immediately with many expressing shock and outrage that the president would say such a thing so openly.

Perhaps it was time, many said, to stop beating around the bush and call out the president for what he truly is: a racist. The truth is, the time for that came well before this latest outburst. But his most recent outrage does provide an opportunity to reflect on the danger that such vile rhetoric can pose, especially when spewed from the highest authority in the land.

As someone currently writing about anti-Semitism and immigration in Germany in the United States around the turn of the twentieth century, the rhetoric of this president is all too familiar. Similar sentiments were commonly directed toward Jews in both countries before and after the First World War. Back then, much of the immigration debate involved concerns over the “racial health” of the nation. Superior, white Anglo-Saxon/Germanic stock (which, many believed, had been responsible for ‘making America great’) was in danger of decline through the inclusion of inferior, darker peoples from Eastern and Southern Europe. Trump’s expressed preference for Norwegians echoes such racist, eugenic notions.

Back a century or so ago, Jews were the ones playing the role that Haitians and Africans are playing today in the president’s thinking. Consular reports entered into the record during congressional debates over immigration in 1920 described Jews as “an undesirable class of immigrant” representing an “immediate danger of carrying contagious diseases” and exhibiting “signs of mental, physical, and moral depreciation.” In 1922, Hugh Gibson, American Minister to Poland, described “awful” Jewish villages that he encountered in that country. “Never,” he wrote, “have I seen nigger villages at home so utterly shiftless and hopeless as the Jewish settlements along the road. The people are filthy and sullen and you wonder why they go on living.” These were the people that journalist Kenneth Roberts called “human parasites” in his 1922 book Why Europe Leaves Home.

Already by the 1890s there developed a strong association between Jews and disease. After successfully excluding Chinese workers in 1882, America’s white supremacists sought additional ways to keep out other undesirable immigrants, the newly arriving Jews among them. Health standards became one way to do that. And as American immigration agents enforced such standards with ever-greater zeal, they began sending immigrants back across the ocean.

Located across the route from Eastern Europe to the United States, Germany became a transit-land for the millions of poor, unassimilated Jews seeking better prospects in the “Golden Land.” Concern that these Jews might be sent back led the German government and then the shipping companies themselves to set up medical stations along the country’s eastern border and quarantine stations in Berlin and the ports of Hamburg and Bremen. The very fact that Jews had to be checked for disease and even “deloused” before they could travel attached a very powerful stigma to this group—Jews were carriers of disease, threatening to infect and weaken the German or American racial body.

We know what role that stigma played in Germany after the First World War. The image of the Jew as pest, as bacillus, as the polluter of healthy Aryan blood was among the most common tropes in Nazi propaganda. By the 1940s, then, the “delousing” of Jews meant death.

In America, the fear of people migrating from such “shithole” countries in Eastern Europe played an important role in the rise of anti-Semitism to unprecedented levels during that same period. Already back in the 1890s health agents in New York tasked with moving Jews into quarantine acted brutally in taking them from their homes. In 1924 Congress all but shut the door to further immigration from Eastern and Southern Europe while continuing to allow the flow of “superior” white northern Europeans. But while Norwegians could still come to America over the coming decades, immigration restriction helped seal the fate of unknown numbers of Jews who looked to this country as a refuge from the horrors of the Holocaust.

The truth is it was clear long before the president’s latest outburst that he is a racist. And the mountain of evidence grows larger seemingly by the day. After all, this is a man who refused to unequivocally condemn people who marched with swastika flags on the campus of an American university. The message sent by his moral failure on that day is the same as the message he sent yesterday. Americans—real Americans—are white and Christian. They are the ones that count. The others? The ones from the “shitholes” of the world? They’re a threat. And as we saw on that horrible day in Charlottesville, Trump’s followers know what to do with people they consider a threat. There should be no shock whatsoever when the violence increases.

There is no clearer message of exclusion than what Donald Trump expressed so freely to his colleagues on Capitol Hill about who does and does not belong in this country. But fortunately, we have history to tell us where such exclusionary rhetoric leads. Donald Trump can define his own community any way he likes. It’s up to all the rest of us—the outraged—to keep our community as wide, as open, and as welcoming as possible.