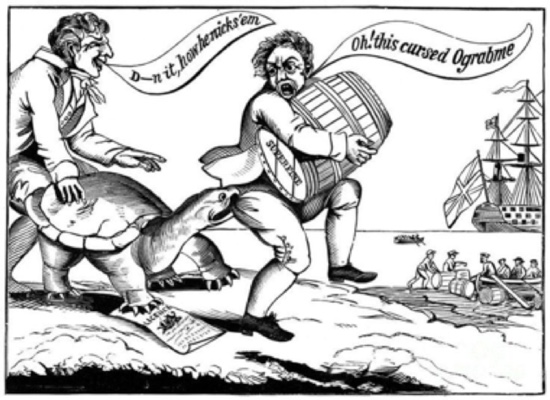 Not long after Thomas Jefferson took office, Britain and France went to war again and both nations began blocking foreign ports of trade and violating American neutral rights at sea by seizing U.S. merchant ships along with their valuable cargoes and crew. Even more inflammatory, the British resumed its practice of kidnapping and impressing American sailors into the Royal Navy. Then, in June, 1807, the British warship H.M.S. Leopard attacked the U.S. merchant ship Chesapeake, killing three Americans and seriously wounding eighteen.

As news of the attack spread, massive anti-British rallies and outraged calls for war erupted throughout the United States. But Jefferson wanted to avoid war. War would bring high taxes, a bloated military, and the suppression of wartime dissent. Secretary of State James Madison, however, came up with a plan. Assuming that Britain and France depended on American goods and raw materials, he urged Jefferson to prohibit U.S. trade with all foreign nations.

The strategy: when Britain and France realized how much they depended on American trade, they would come to their senses and respect American neutrality. Jefferson liked the plan. But, the Embargo Act, which Congress quickly passed with little deliberation in December, 1807, didn’t work as Jefferson and Madison had hoped. The British and French simply ignored it and traded with other ports. The embargo also devastated American commerce, especially in the South, where planters produced sugar, rice, tobacco, cotton, and other crops for export, and in New England, where merchants depended on overseas trade.

With foreign trade turned away, American ports closed, merchants shuttered their shops, and nearly 30,000 workers lost their jobs. “Almost everyone was affected,” one historian noted, “from farmers who couldn’t sell their surplus cornmeal and flour overseas, to ship owners whose boats now sat idle at anchor, to dockworkers who had no cargo to load or unload, right on down to the bartenders at waterfront grog shops who lost their hard-drinking seafaring clientele.”

In every major port from Georgia to Maine, the scene was the same: “wharves pilled high with … barrels of potash, flour, and salted meat, hogsheads of rum, and crates full of other American-made merchandise — all ready for the markets of Europe, and no way to get them there.”

So the Embargo Act was a disaster, and just about everyone blamed Jefferson for their misery and suffering. But Jefferson stubbornly stuck to his guns and ordered the U.S. Navy to block American ports and seize all “suspicious, outgoing cargoes.” He also urged that anyone who violated the embargo, or disagreed with it, could be prosecuted for treason, punishable by imprisonment and even death.

This, of course, didn’t go down so well with the American people, and, when the election of 1808 rolled around, the embattled 65-year-old Virginian announced that he would not seek reelection. Like George Washington, Jefferson desperately wanted to return to a private life as a gentleman farmer. And, as he prepared to leave Washington D.C., he wrote, “Never did a prisoner, released from his chains, feel such relief as I shall on shaking off the shackles of power.”

Today, as Donald Trump’s trade war endangers our nation and closest allies, we, as concerned citizens, would do well to remember that our constitutional republic and democratic institutions are stronger than the insidious encroachments of an impetuous demagogue, who history will surely show has put his own corrupt interests above the interests, safety, and security of our country and the world.