What Trump Could Learn About Immigration from Teddy Roosevelt

History writer Greg Bailey is the author of the recently released novel Darryl Ray and the forthcoming The Herrin Massacre. 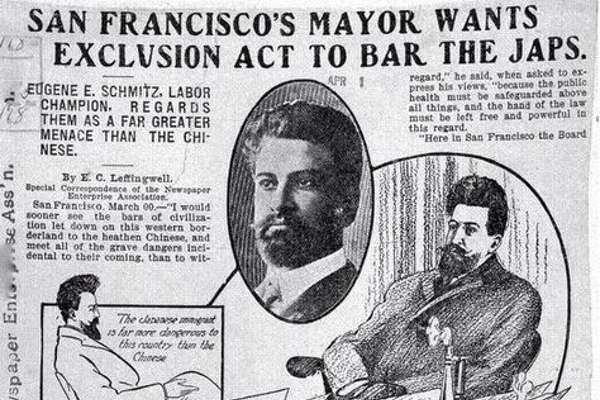 An example of anti-Japanese sentiment.

Recently, Donald Trump virtually gutted the Department of Homeland Security with the forced resignation of DHS Secretary Kirstjen Nielson and key deputies because they were ‘too soft’ on immigration. He then made a bad situation far worse by the de facto appointment of xenophobic Stephen Miller to take over immigration policy.

Anti-immigrant sentiment has been at the forefront of Trump’s politics since he announced his run for president. At his campaign announcement in 2015, he labeled Mexicans as rapists. Once in power he has labeled immigration as a national crisis and has demanded a wall between the U.S. and Mexico. While he initially asserted Mexico would pay for such a wall, when Congress denied him funding for it he shut down the government for a record-breaking 35 days. Most recently, he threatened to shut down the U.S. –Mexico border but ultimately did not because of the loss in trade.

President Trump could learn a valuable lesson from Theodore Roosevelt on immigration. At the turn of the 20th century, Asian immigrants were demonized by Americans. The Chinese laborers brought to the west to work on the construction of railroads fueled the hatred of Asians and the “Yellow Peril” that some thought threatened to take over America and destroy Western civilization.

After the Chinese Exclusion Act of 1882  the focus turned to the relatively small number of Japanese coming to America.  It was particularly virulent in San Francisco where Mayor Eugene E. Schmitz formed the Japanese and Korean Exclusion League in 1905. Schmitz demanded the segregation of the tiny fraction of Japanese children in the public schools in order "to save white children from being affected by association with pupils of the Mongolian race." The Board of Education agreed and the children were forced to attend a segregated school.

In much the same way Americans protested the treatment of Amanda Knox in the travesty of a murder trial, Japan interpreted the discrimination as an insult to its national pride. Japan had recently been fortified by military victory over Russia and the acceptance of Japan by Western nations as an emerging world power. A series of diplomatic notes passed between Japan and the United States, and tensions mounted.

In order to diffuse and resolve the problem, Roosevelt brought the mayor and the school board to the White House and cajoled them to reverse the decision. He secured a promise that the segregation would be lifted if Japan restricted emigration. The Japanese government agreed and stopped issuing passports to the United States, although some were allowed to go to the Hawaii Territory. With the guarantee the school board relented.

The resolution became known as the Gentlemen’s Agreement of 1907 or in Japanese Nichibei Shinshi Kyoyaku. Without rancor or inflammatory rhetoric Roosevelt solved an immigration crisis. The agreement was not perfect. Some Japanese people granted entry into Hawaii could and often did make their way to the mainland.  An exception for family members, a practice now denounced by the current president as ‘chain migration’, still allowed some Japanese to come to the United States. Japanese nationals escaped the feared exclusion acts until the Immigration Act of 1924 which cut Asian immigration to near zero.

Even if the current occupant knew this part of history he would not be able to learn from it. Intelligent foreign often requires the delicate touch of a scalpel rather than the pounding of a sledge hammer. But for the rest of us we can know from this history that it is possible to handle immigration policies sensibly and even compassionately. And there is hope that a better president will soon be repairing the damage.