Kevin Kennedy is a German-American historian, lecturer, writer and commentator who lives in Potsdam, Germany. He also works as a local guide in Berlin, Potsdam and Dresden. His work has appeared in the British periodical History Today, the English-language service of Deutsche Welle, the philosophy blog Modern Stoicism and History News Network. He can be reached at kevin.alterfritz@gmail.com 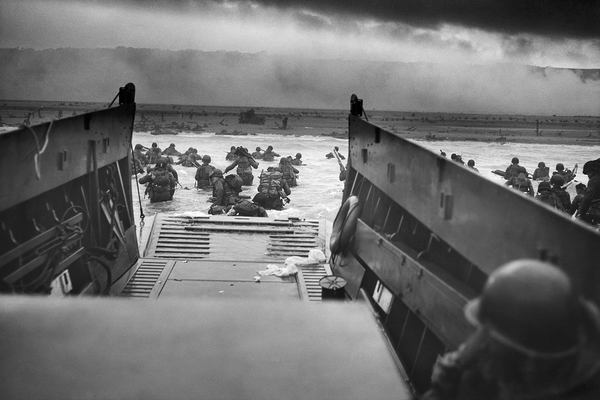 Last Friday (May 31, 2019), the NPR radio program “On Point” conducted a special live broadcast from the National WWII Museum in New Orleans entitled “75th Anniversary Of D-Day: Preserving The Stories Of WWII Veterans." The host was NPR’s media correspondent David Folkenflik and the segment featured Walter Isaacson, professor of history at Tulane University, and Gemma Birnbaum, associate vice president of the World War II Media and Education Center at The National WWII Museum, as guests. This writer was not only looking forward to an engaging discussion of the successful Allied landings at the Normandy beaches on June 6, 1944, but also hoping that the guests would present the contemporary state of military history research on the significance of D-Day.

I was sorely disappointed. Instead of placing the invasion within the wider context of the war against Nazi Germany, Folkenflik and his guests revived the “Myth of D-Day,” that is, they reinforced the erroneous belief that D-Day was the decisive battle of the Second World War in Europe, that it marked “the turning of the tide,” and that it sealed the doom of the German Army, the Wehrmacht. Had D-Day failed, so the argument goes, Germany could have still won the war, with nightmarish consequences for Europe, the United States and the world as a whole. This myth is a legacy of the Cold War, when each side accentuated what it did to defeat Nazi Germany, the most monstrous regime in human history, and played down the contributions of the other side. Russian students today, for example, are taught the “Great Patriotic War,” which the Soviet Union won practically single-handedly, without having previously cooperated with Nazi Germany and without having had committed any atrocities – which is take a creative approach to interpreting the history of World War II, to say the least. But it also remains the case that far too many American, British and Canadian students are taught that the victory over Nazi Germany was mostly the work of the Anglo-American forces, which also is a distortion of truth.

This “Allied scheme of history,” as the Oxford historian Norman Davies calls it, was most consistently presented by Gemma Birnbaum on the On Point broadcast. She not only reiterated the belief that D-Day was necessary to defeat Nazi Germany, but her words also suggested that, until then, Germany was somehow winning the war. Before the Allies invaded France, she said, the Wehrmacht “was moving all over the place.” According to her, it was only after the German defeat in Normandy that “fatigue began to set in” among German soldiers. But “fatigue” had already begun to spread throughout the Wehrmacht in the late fall of 1941, when the Red Army stopped the Germans at the gates of Moscow. It is true that the Germans continued to “move all over” Europe afterwards, but they increasingly began doing so in a backwards motion. It is depressing to consider that Birnbaum co-leads the educational department of the World War II museum in New Orleans, where she has the opportunity to pass on her myopic views of the war onto countless young people, thus ensuring the perpetuation of the D-Day myth. Not much has changed in the museum, it would seem, since 2006, when  Norman Davies commented: “Yet, once again, the museum does not encourage a view of the war as a whole. Few visitors are likely to come away with the knowledge that D-Day does not figure among the top ten battles of the war.”

Many military historians would now contend that, if there was indeed any “turning point” in the European war, it took place before Moscow in December 1941. For it was then that Germany lost the opportunity to win the war that it had been hoping to win. It was also at that point that the Soviets forced upon the Germans a war of attrition. As the Stanford historian James Sheehan points out, there are no decisive battles  in wars of attrition, but rather milestones along the way to victory, as the enemy is slowly but surely reduced to a condition of weakness where they can no longer continue the fight. In that sense, the other important milestones were Stalingrad (February 1942), after which it became increasingly clear that Germany was going to lose the war, and Kursk (July 1943), after which it became increasingly clear that the Russians were coming to Berlin, with or without the help of the Western Allies.

Any objective look at the human and material resources available to Nazi Germany by the spring of 1944, especially compared to those available to the Allies, makes the claim that D-Day saved the world from a Nazi-dominated Europe preposterous. Such arguments are not history but science fiction. We need only consider that in May 1944, the German field army had a total strength of 3.9 million soldiers (2.4 million of which were on the Eastern front), while the Soviet Red Army alone had 6.4 million troops. Moreover, while the Wehrmacht had used up most of its reserve troops by 1942, Joseph Stalin could still call up millions more men to fight. While Germany was rapidly running out of the food, fuel, and raw materials an army needs to fight a protracted war, the stupendous productive capacities of the United States, through the Lend-Lease program, made sure that the Soviet soldiers were well-fed and equipped for their final assault on Germany. Add to this the continual pounding that German industry and infrastructure was taking by the Anglo-American air war, which also forced the German military to bring back invaluable fighters, anti-aircraft artillery, and service personnel to the home front, and it becomes obvious that Germany was fated to lose the war long before any Allied soldiers reached the beaches of Normandy. The German army was defeated on the Western front, to be sure, but it was annihilated in the East. Until almost the very end of the war, somewhere between 60-80 per cent of the German divisions were stationed in the East, and that was where they were wiped out. But the Soviets paid a horrific price for their victory. According to the Military Research Office of the Federal German Army, 13,500,000 Soviet soldiers lost their lives in the fight against Nazi Germany. The United Kingdom lost some 326,000 soldiers. The United States lost 43,000 men in Europe.

In light of such statistics, one can only imagine how offended many Russians, Ukrainians and Byelorussians must feel today when they hear Americans congratulating themselves for having been the ones who defeated the Nazis. Nevertheless, the host of the On Point broadcast, David Folkenflik, introduced one segment with the claim that the United States had played the “dominant” role in achieving victory in World War II. Regarding the Pacific theater, there is no doubt about this. But after considering the scale of the fighting on the Eastern front of the European war, Folkenflik’s contention becomes absurd. Unfortunately, such comments are still all-too common. The English historian Giles Milton, for instance, has recently published a book entitled “D-Day. The Soldier’s Story,” in which he writes that the tide against Nazi Germany “had begun to turn” by the winter of 1942, but he still reserves the final turning for D-Day.  So it is no wonder that many Russians today feel that people in the West fail to give them the credit they deserve for achieving victory in World War II.

This is important to contemporary polticis: if the tensions between Russia and the United States are ever to be overcome, then there will have to be more American recognition and appreciation of the sacrifices of the Soviet peoples in World War II. Otherwise Americans will continue to make it easier for Vladimir Putin to engage in his own historical myth-making to help legitimize his increasingly authoritarian rule. To be fair, if David Folkenflik had decided to include a discussion of the Eastern Front in his broadcast, it would have lasted too long and lacked focus. Moreover, it is only to be expected that, when a nation reflects on the past, it concentrates on its own historical achievements. But that cannot be a license for spreading false historical beliefs. At least a brief mention of the Eastern front would have been merited.

To acknowledge that D-Day was no “turning of the tide” in no way implies that it was not an important, or even a crucial, battle of the Second World War. Had the landings failed, as the American Allied Supreme Commander Dwight D. Eisenhower feared they might, the war could have dragged on for several more years. In that case, the Nazis would have come much closer to their goal of exterminating every last Jewish man, woman and child in Europe. Not to mention the hundreds of thousands, perhaps millions more military and civilian casualties that would have ensued. Victory in Normandy saved countless lives. In the final analysis, however, the greatest strategic consequence of the battle lies elsewhere.

This true significance of D-Day was briefly mentioned during the On Point episode by Walter Isaacson. (He was also the only participant who did not engage in overt exaggeration of D-Day’s importance for defeating Nazi Germany.) Isaacson made the most sensible comment of the entire program when he pointed out that, had D-Day failed, a lot more of Europe would have fallen under the control of the Soviet Union that actually did. In truth, without D-Day, the Soviet T-34 tanks would not only definitely have crossed the river Rhine, but they most likely also would have reached the French Atlantic coast. As the English military historian Anthony Beevor has discovered “a meeting of the Politburo in 1944 had decided to order the Stavka [Soviet High Command] to plan for the invasion of France and Italy. . .  The Red Army offensive was to be combined with a seizure of power by the local Communist Parties.” D-Day may not have been necessary to defeat Nazi Germany, but it was needed to save western Europe from the Soviet Union. As Beevor observes, “The postwar map and the history of Europe would have been very different indeed” if “the extraordinary undertaking of D-Day had failed.”

By all means, then, we should commemorate the heroism and sacrifices of the Anglo-American soldiers who fought and died on D-Day. They all made an important contributions to liberating western Europe and achieving victory over Nazi Germany. But national pride must never be allowed to distort historical reality. The successful Allied landings in Normandy accelerated Germany’s defeat, but they didn’t bring it about. The German military historian Jörg Echternkamp puts it well: “From the beginning of the two-front war leads a straight path to the liberation of Europe from Nazi domination roughly one year later. Nevertheless the German defeat had already at this time long since been sealed on the eastern European battlefields by the Red Army. This is all-too easily concealed by strong media presence of D-Day today." The credit for vanquishing Adolf Hitler’s armies should go first and foremost to the Soviet Red Army. Again, Norman Davies is correct when he writes: “All one can say is that someday, somehow, the present fact of American supremacy will be challenged, and with it the American interpretation of history.” For now, however, as the On Point broadcast has shown, popular understanding of D-Day in the Unites States continues to be more informed by myth than reality.