Yanek Mieczkowski is a Distinguished Visiting Scholar at the University of North Florida.  He is the author of Eisenhower’s Sputnik Moment:  The Race for Space and World Prestige,Gerald Ford and the Challenges of the 1970s, and The Routledge Historical Atlas of Presidential Elections. 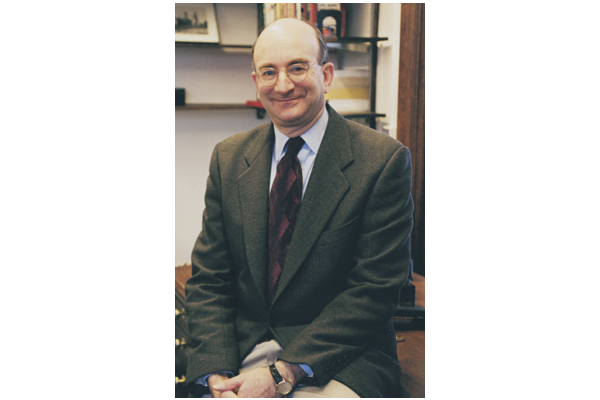 As anyone who has experienced graduate school may tell you, the relationship between a doctoral student and mentor is special.  A conscientious mentor can work magic, helping to transform a rough, tentative thesis into a defensible treatise and eventually an important book.  An advisor can be a wellspring of motivation, and might even save a wayward student from the trap that ensnares too many Ph.D. candidates—the unfinished dissertation.  By tradition, a mentor will be the first to address you as “Doctor” after you defend your dissertation, and then help you gain a foothold—or even just toehold—in the job market.  You may think of your sponsor every day for the rest of your career, perhaps the rest of your life.

I had the perfect mentor.  Alan Brinkley, the revered Columbia University historian and Allan Nevins Professor Emeritus, who died on June 16, did all of that for his advisees, and much more.

Alan arrived at Columbia during a time of transition.  In 1990, John Garraty, a prolific writer and author of the best-selling textbook, The American Nation, retired as the History Department’s twentieth-century political historian, leaving a huge void and a cadre of graduate students without an advisor.  The Department launched a search for a senior historian, indicating that it wanted to hire an eminent scholar who could provide seasoned guidance to students.  I remember attending Alan Brinkley’s interview lecture, and the Department subsequently hired him.  After concluding his teaching and advising responsibilities at CUNY during 1990-91, he joined the Columbia faculty in September 1991.

I met Alan in 1990, while he was a CUNY professor.  I was shaping a dissertation topic on Gerald R. Ford’s presidency.  Early in the Fall 1990 semester, Alan took me out to lunch at a restaurant near his West 81st Street apartment, and we discussed ways to structure that study.

I was impressed that Alan set aside time for me. Although he had yet to start at Columbia, he began to be my mentor, approaching my topic in a rigorous, organized manner. I think he discerned that after Garraty’s retirement, graduate students specializing in U.S. political history hungered for guidance, and those of us in the pre-dissertation stage wanted to lay more groundwork but needed help in doing so.  During that lunch, Alan showed he was already deeply invested in assisting me.

That meeting also marked the beginning of my exposure to Alan’s many kindnesses—the “Brinkley treatment” that enriched my graduate school experience and the years beyond.  Later that semester, when Alan learned that I would stay in Manhattan during Thanksgiving, he invited me to dinner at his apartment with his wife Evangeline and their extended family.  For a graduate student away from home, a genuine Thanksgiving meal was the greatest treat imaginable.

Over the years to come, the time Alan spent with me exemplified a quality that made him a sterling mentor.  For a university professor, time is a tyrant.  Classroom instruction, research, publications, and administrative duties exert a pulverizing grind, and no workday has enough hours for it all. Yet Alan juggled these imperatives deftly, while providing generous time for his students.  Sitting in Alan’s office—receiving his individual attention and imbibing his wisdom—was always flattering.  He had a gift for putting visitors at ease, never giving any pretense that he was a world-renowned historian with multiple demands tugging at him. Once, when I was in his office, a line of students formed outside, and I expressed concern about making them wait. “That’s okay,” he said, “I’m with you now.”  I think of Alan today when students visit my own office.  Invariably, the phone rings, texts ping, and emails beckon.  But like Alan, I try to offer students unalloyed attention and as much time as they need to discuss whatever prompted their visit.

Watching a mentor’s behavior offers other enduring lessons.  Alan’s schedule and routine were a clinic in understanding how to use time wisely and maximize productivity.  He had a fantastic work ethic, churning out books and articles, yet as modest as he was, he never betrayed any sense of a relentless schedule.  While I was in graduate school, Alan was researching a new book, poring over the records of the Temporary National Economic Committee and the works of economists like Alvin Hansen, later publishing the results as the critically acclaimed The End of Reform:  New Deal Liberalism in Recession and War.  In 1992, he received a contract to write a biography of magazine magnate Henry Luce.  For the next fifteen years, he mined the Time-Life archives and wrote this book—while producing at least two other monographs—showing a rare ability to maintain multiple works simultaneously on his research agenda.  (In 2010, his Luce biography, The Publisher, became a Pulitzer Prize finalist.)  During his first year at Columbia, whenever I visited him at his office, he was usually working on two other projects as well.  One was abridging his textbook, American History, which he published as the shorter The Unfinished Nation, a volume that surpassed the longer version in popularity.

The other project was Alan’s classroom lessons, including new course preparations and a reconfiguration of his lectures, which he rewrote to fit Columbia’s classroom schedule.  From the start, I observed firsthand Alan’s two great passions, writing and teaching, and his dedication to both.  He was a master at these crafts, and seeing him labor at them provided instructive lessons in their importance.

To evaluate professors, academia traditionally embraces those two criteria—teaching and publication—plus a third, service.  Alan’s mentorship made me conscious of a fourth element:  public dissemination of scholarship. “Publication,” after all, implies addressing the public, and Alan emphasized that historians need to reach general audiences.  He was in heavy demand as a speaker and television pundit; I recall walking to campus and seeing a TV crew preparing to interview him in the courtyard outside the History Department.  Alan appeared on The Today Show and ABC’s political coverage, and published articles in The New York Times, Newsweek, The Atlantic, and other popular venues. Alan’s alumni all subscribe to a Brinkley school of history, striving to write for the public.

In 1995, I became Alan’s first student to defend a dissertation at Columbia, and he and Evangeline later took me and a classmate to dinner to celebrate. It was, once again, the Brinkley treatment—kind, generous, and memorable—making his students feel special.  Graduation marks a new phase in the student-mentor relationship; the sponsor next helps a former advisee to secure employment.  The academic job market is daunting, as Alan warned, but just before the Fall 1996 semester, after I had worked a year as a Writing Fellow for Oxford University Press, he and Eric Foner informed me of a position at Long Island’s Dowling College.  It was a temporary, one-year appointment, but miraculously, my one year there turned into nineteen years, as I remained at Dowling until the school closed in 2016.

Landing a job near New York City enabled me to stay in close contact with Alan, and he continued to welcome my visits.  In September 1998, I stopped by his office the day before he left for London to be Oxford University’s Harmsworth Visiting Professor.  That day, he was unstinting with his time to the point of self-sacrifice.  I asked, “You must be all packed and ready to leave tomorrow?”  Laughing gently, he said, “Actually, we still have a long way to go.”  A wave of guilt swept over me.  There I was, taking up Alan’s time, when he could have been preparing to leave for England.  Yet talking to me that afternoon, he never seemed rushed at all.

Alan maintained contact with former students in many ways.  I was in graduate school before the era of email—which seems like antediluvian times now—but once Alan began emailing, he was a most reliable correspondent, and not just with me.  When I graded the Advanced Placement U.S. History Exam, a high school teacher reported that one of her students peppered Alan with email questions all year as he prepared to take the AP Exam.  Alan, this teacher said with admiration, answered every email.

In the world of AP U.S. History, Alan loomed as a mythic figure because of his textbooks.  In 2010, he gave the keynote address at the AP Exam grading in Louisville, and many teachers wanted their picture taken with him.  Alan had a self-effacing sense of humor, and he commented to me that when he was a child, people would stop his father, NBC news anchor David Brinkley, on the street and ask for his autograph.  “It’s only at the AP U.S. History grading,” Alan chuckled, “that I get a sliver of my father’s celebrity.”

Remarks like that reminded me of one of Dwight D. Eisenhower’s favorite aphorisms.  A furious worker himself, Eisenhower reminded aides to keep a sense of perspective, saying, “I want you to take your work seriously; don’t take yourself too seriously.” Alan always strove for such a balance in his life and career, and that was perhaps the most edifying lesson I learned from him.  As devoted as he was to history, he led a balanced life, with ample activities outside the discipline.  He swam laps for exercise.  He liked to cook.  He enjoyed theater, and he gave me tickets to a play that Evangeline produced, Distant Fires, which offered searing commentary on racial tensions at the workplace.  After the 9/11 terrorist attacks, Alan volunteered at Ground Zero.  Most importantly, his family was dear to him.  After their daughter Elly was born in 1991, he and Evangeline invited me to their home to meet her, and I recall seeing Elly for the first time, sleeping peacefully in her crib.  Alan’s protean interests may remind all students to keep the wheels of their activities balanced.

While Alan Brinkley might not have seen himself as a celebrity, for American historians, he was a star—especially at the graduate level. Beyond his impeccable scholarship and insightful lectures, he was a mentor to dozens of doctoral students. In that role, he was perfect, providing profound lessons that will last through many careers, and likely, many lifetimes.