Jon Hale is an Associate Professor of Education at the University of South Carolina. 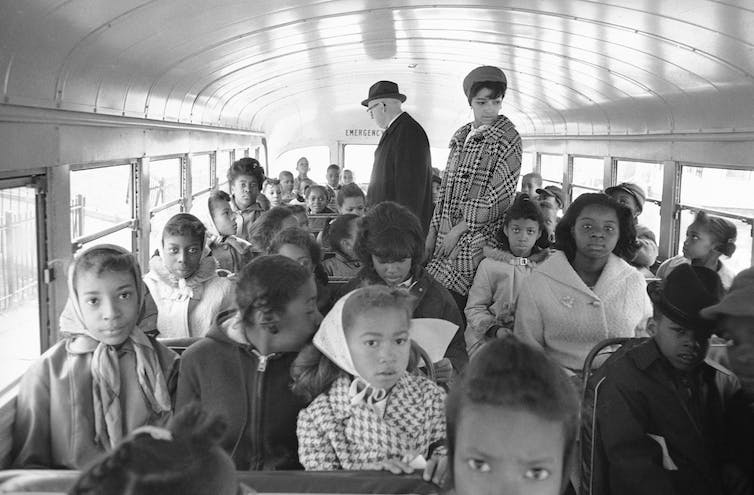 A 1974 Supreme Court decision found that school segregation was allowable if it wasn’t being done on purpose. AP

America recently marked the 65-year anniversary of the Supreme Court’s decision in Brown v. Board of Education – a landmark case intended to abolish the “separate-but-equal” doctrine of racial segregation in schools.

But the racial makeup of today’s schools actually owes itself to a series of other court decisions – including one issued 45 years ago on July 25, 1974. The Milliken v. Bradley decision sanctioned a form of segregation that has allowed suburbs to escape being included in court-ordered desegregation and busing plans with nearby cities.

The Milliken decision recognized “de facto” segregation – segregation that occurs as a result of circumstances, not law. This allowed schools in the North to maintain racially separate schools at the same time southern schools were being ordered by the courts to desegregate. By giving suburbs a pass from large mandated desegregation attempts, it built a figurative wall around white flight enclaves, essentially shielding them from the “crisis” of urban education.

Outside a few voluntary and limited programs such as METCO in Boston and Springfield, Massachusetts, or Chapter 220 in Milwaukee, Wisconsin, that enabled a small number of children from cities to attend schools in the suburbs or more affluent areas, northern school districts remained largely segregated.

The decision ruled that social segregation was permissible and therefore exempt from court-ordered, “forced” desegregation plans. That is, the court said, if segregation occurred because of certain “unknowable factors” such as economic changes and racial fears – not a law – then it’s legal.

Originating in Detroit, a major destination of the Great Migration, the mass movement of southern African Americans to northern cities, the decision dictated how desegregation would proceed outside the South, if at all.

Federal courts had issued rulings that helped eradicate legal segregation - primarily in the South - through the 1968 Green v. School Board of New Kent County and 1969 Alexander v. Holmes County Board of Education decisions, even employing military force.

But the nation largely understood segregation to be an issue confined to the South. Milliken brought the freedom struggle’s call for integration to the North.

Twenty years after the Brown decision, the NAACP, Urban League and civil rights activists documented how segregation led to underfunded and inferior schooling across the North in cities like Chicago, New York and Detroit.

Black activists in Detroit like Rev. Albert Cleage, the NAACP and black parents in segregated housing and schools began to demand education reform as the freedom struggle intensified during the 1940s. They demanded things that ranged from community control to integration in all schools as opposed to token desegregation. By 1970, the NAACP demanded a desegregated school system as promised by Brown and filed a lawsuit against the governor, William Milliken.

As the Milliken case worked its way through the courts from 1970 to 1974, the nature of public education was changing. Millions of whites abandoned the cities for suburban enclaves. Like the rest of the North, Detroit experienced dramatic population shifts that decimated public schools. From the 1950s through 1970s, Detroit lost over 30% of its white population to the suburbs, where the population climbed to over 3 million. By the 1970s students of color comprised nearly 75% of a once majority-white system. More affluent whites and the few families of color who fled left behind a depleted tax base that starved public schools, as described in Jeffrey Mirel’s “The Rise and Fall of an Urban School System.”

To address the issue of persistent segregation, the Supreme Court consented in the 1971 Swann v. Mecklenburg decision to busing students outside their neighborhood schools in North Carolina as a solution to segregation.

Following the spirit of Swann, a United States district judge for the Eastern District of Michigan named Stephen J. Roth, issued one of the most extensive desegregation orders of the era in 1972. Roth’s plan called for the two-way integration of 780,000 students across not only Detroit, but school districts in a tri-county area.

The plan was never put into action because of the 1974 Supreme Court Milliken decision.

Districts could still voluntarily bus - but busing was so unpopular and politically untenable in 1974 that few attempted it in any serious manner. A narrow 5-4 majority of justices determined that “racial imbalance” in Detroit – and by inference in other U.S. cities – was caused by “de facto” segregation.

Justice Potter Stewart wrote in his concurring opinion that segregation in Detroit was “caused by unknown and perhaps unknowable factors such as in-migration, birth rates, economic changes, or cumulative acts of private racial fears.” In other words, the justices in the majority – most of them appointed by President Richard Nixon – found that the suburbs should not be subject to busing.

In a scathing dissent, Justice Thurgood Marshall, the lead counsel for the NAACP when the Brown case was brought to the court and who was appointed to the Supreme Court in 1967, wrote: “After 20 years of small, often difficult steps (toward equal justice under law) the Court today takes a giant step backwards.” He said the Court revived “the same separate and inherently unequal education … afforded in the past.”

Milliken put forth the convenient narrative that segregation in the North was natural and therefore permissible. It also freed northern school districts from being forced to participate in large-scale solutions to segregation and unequal education outside their boundaries.

I believe continuing to ignore Milliken covers up the ongoing segregation of America’s schools today and the nation’s collective, ongoing failure to improve public education in the spirit of Brown.