Many Historians Got It Wrong on Obama's Foreign Policy

Jeremy Kuzmarov has taught at numerous colleges including currently at Tulsa Community College and is author of four books on U.S. foreign policy including the just released: Obama’s Unending Wars: Fronting for the Foreign Policy of the Permanent Warfare State (Atlanta: Clarity Press, 2019) as well as The Russians are Coming, Again, with John Marciano (New York: Monthly Review Press, 2018). 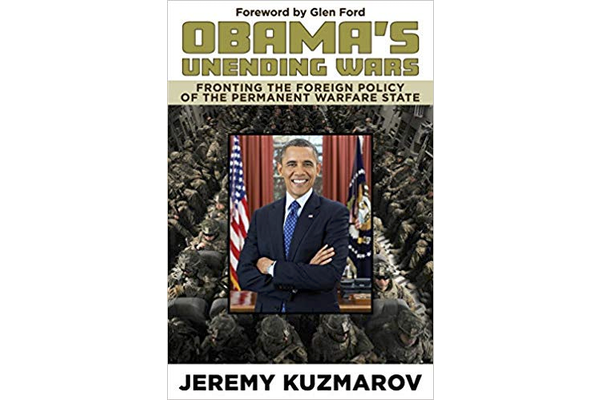 Most historians tend to be liberal in their orientation and this perspective can sometimes cloud their judgment in assessing liberal presidents.

For example, Woodrow Wilson and John F. Kennedy continue to receive high marks compared to their conservative counterparts, even though both presidents carried out ruinous policies. Wilson led the United States into World War I on dubious pretexts, resulting in the death of 100,000 Americans, while Kennedy escalated the American involvement in Vietnam, backed cutting tax rates for the wealthy, and expanded covert military interventions.

Today, while Donald Trump is reviled, many liberal historians have a soft spot for his predecessor Barack Obama, whose policies were just as bad in many areas. In a 2017 poll taken just after President Trump’s inauguration, historians ranked Obama as the twelfth best president of all-time, praising him for his commanding moral authority.

Obama, however, initiated a major troop surge in Afghanistan and redeployed troops to Iraq while starting a new war in Yemen using Saudi Arabia and the United Arab Emirates as proxies. His defense budgets outstripped those of Bush by an average of $18.7 billion per year and his base budgets exceeded those of Bush during his two terms by $816.7 billion.

In a volume edited by Julian Zelizer of Princeton University, University of Texas historian Jeremi Suri praises Obama for offering a liberal internationalist vision – emphasizing multilateralism, negotiation and disarmament – after eight years of neoconservative militarism under President George W. Bush. Suri writes that “Obama’s vision was progressive and pragmatic, focused on American leadership through democratic alliances and common law that would underpin legitimate force. He worked vigorously to build alliances and negotiations. He sought to tame war with law and where possible end American military conflicts. As a good lawyer, he sought to nurture careful procedures for assessing targets, collateral damage and regional reverberations.”

Such claims are undercut by the fact that Obama sowed regional instability byinvading and bombing seven Muslim countries, and ordering the assassination of terrorist suspects without due process. A CNN report found that less than two percent of drone fatalities were high value insurgent leaders, while the Bureau of Investigating Reporting estimated that at least 1,100 civilians were killed.

My book, Obama’s Unending Wars: Fronting for the Foreign Policy of the Permanent Warfare State (Atlanta: Clarity Press, 2019) provides the first comprehensive critical history of the Obama Administration focused specifically on  its foreign policies. I argue that Obama was one of the most effective front-men for war in American history. He successfully curtailed popular dissent that had existed under Bush and helped to institutionalize a permanent warfare and a mass surveillance state.

The president whom I compare Obama to is Woodrow Wilson, whose reverential treatment by historians is epitomized by a recent biography entitled: “The Moralist.”

Both Wilson and Obama came from academic backgrounds and were brilliant orators skilled in “camouflaging their settled opinion,” as Senator Richard Pettigrew, (R-SD) a populist and a contemporary of Wilson, wrote in his memoirs. Both were capable of winning over liberals while functioning essentially as Tories. Pettigrew accurately predicted before Wilson’s election that he would “undertake some reforms [and] rail about the bosses [and] talk about purity but he is absolutely owned by the great moneyed interests of the country who paid the expenses of his campaign.” So too, of course, was Obama.

Wilson’s political career was bankrolled by his Princeton classmate Cleveland H. Dodge, scion of the Dodge copper and munitions fortune and a director of the National City Bank and Winchester Arms Company, Obama received major financial support from the Pritzker banking dynasty and the Crown family, which owned the largest percentage of shares in General Dynamics, one of the leadings arms manufacturers in the world.

Both Wilson and Obama were especially gifted in framing military interventions as moral crusades. Wilson packaged intervention in the Great War as a matter of “vindicating principles of freedom and justice in the life of the world as against selfish and autocratic power [Germany].” Obama invoked the concept of “humanitarian intervention” and the Responsibility to Protect (R2P) act to justify military aggression against Libya, which resulted in Africa’s wealthiest country devolving into a failed state.

Rep. Ilhan Omar (D-MN) said it best when she told Politico that: “We can’t be only upset with Trump. … His policies are bad, but many of the people who came before him also had really bad policies. They just were more polished than he was… We don’t want anybody to get away with murder because they are polished. We want to recognize the actual policies that are behind the pretty face and the smile.”

Many historians appear to have been so mesmerized by Obama’s charisma and relatively progressive domestic policies that they cannot properly criticize the foreign policy of Obama. It’s worth remembering that the malaise of American political life far transcends Donald Trump.