“This letter is the last that I write to you:" The Courage of Youth Resisters in World War 2 France

Ronald C. Rosbottom is the author of Sudden Courage: Youth in France Confront the Germans, 1940-1945. Rosbottom is the Winifred L. Arms Professor in the Arts and Humanities and a professor of French, European Studies, and Architectural Studies at Amherst College. Previously he was Dean of the Faculty at Amherst; he is a Chevalier de l’Académie des Palmes Académiques. His previous book, When Paris Went Dark: The City of Light Under German Occupation, 1940-1944, was longlisted for the National Book Award for Nonfiction. He divides his time between Amherst, Massachusetts, and Paris. 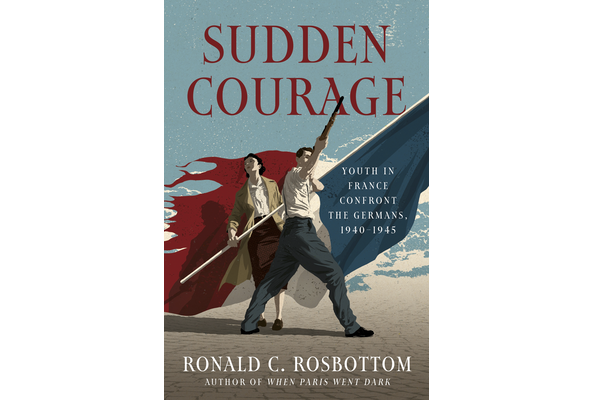 World War II in Europe was the cause of innumerable atrocities against civilians: for instance, the Shoah, Allied and Axis carpet bombing, the destruction of Warsaw, and the cruelties of enforced starvation. Another example is less known: the arrest, torture, and execution of many young people who harassed the Germans during their occupation of France (1940-1945).

About 3000 resisters, many under the age of 25, were tried in German military courts in France, found guilty of clandestine “terrorist” activity, sentenced to death, then executed. The cut-off age for military execution was 16, and some of these boys had barely passed their 17th birthday. For the most part, the prisoners would be informed of their execution only a few hours in advance. Cruelly, under a thin veneer of generosity, the prison guards allowed the condemned to write final notes and letters to their families. The Germans forbade relatives to share them, but many did make copies; some were published in underground newspapers; others reached the BBC in London where they were read for broadcast in France. After the war, a good number of these heart-breaking missives were published.

The authors of these letters reveal an assumed bravado mixed with regret and a moving sensitivity toward the loved ones who would read them. They often showed an admirable self-awareness, gave justification for their actions, and revealed how they hoped to be remembered. Recovered letters from girls and young women were rare, for these “terrorists” were sent to Germany for incarceration or execution by beheading.

In March 1942, 19-year-old Fernand Zalkinow wrote a final missive to his sister from Paris’s notorious La Santé prison. A few days earlier, he had been found guilty in a mock trial, and was executed along with six other young communists at Mont-Valérien, a military encampment outside of Paris where at least a thousand were shot over the four years of the Occupation. It is a long letter, as if he thought he might postpone the inevitable by keeping his pencil scratching across the cheap paper. An excerpt:

Since I’ve been here, I have looked deeply into myself. I have come to realize that, despite all of my faults—and I have more than a few—I wasn’t so bad as all that, and that I could’ve been a pretty good guy. … I’m a bit of a blowhard, I know. But to tell the truth, I still can’t explain why [now] I am so calm. Before my sentence, I often cried, but since, I haven’t shed a tear.  I have the sense of an inner tranquility, a deep quietness ... I have only one more test to pass, the last, and everything will be over, nothing more.

This letter, and dozens like it, serve to remind us of the courage of the young people who had decided, often against advice from their parents, relatives, and mentors, “to do something” (faire quelque chose) against the German occupiers and their French collaborators. Though some took up arms, most resisters at first were non-violent—printing and distributing tracts, hiding arms, protecting refugees and downed Allied pilots, passing information, and so forth-- but these actions could still carry harsh penalties.

Henri Fertet, age 17, wrote to his parents from a prison in Besançon. Imprisoned for three months, he learned that he was to die within a few hours. At the end of his last letter, he scribbled:

My letter is going to cause you great pain, but I have seen you so full of courage that I am certain you will remain strong, if only because you love me. … The soldiers are coming to get me. I’m hurrying. My writing is perhaps shaky, but that’s because I have only a bit of pencil. I’m not afraid of death, I have a tranquil conscience. … I die willingly for my country. ... Adieu; death calls me, I want neither blindfold nor to be tied. I love you all. It’s hard, still, to die. …

PS. Please excuse my spelling mistakes, no time to reread.

The German jailors themselves were not immune to the sight of so many French and refugee youth being shot. Frequently, the execution squads charged with shooting the boys were themselves composed of young soldiers. There were official reports of their own tears, and their depression following these executions. The courage of their condemned contemporaries had a marked effect on more than a few of them. We know too, from his diary, how Franz Stock, a markedly empathetic German chaplain, a devout Catholic, becalmed the anxieties of those facing imminent death--communists, Jews, Protestants, and non-believers. Though tasked by the Wehrmacht to minister to the condemned, and to be present at their execution, he often passed notes from their parents to the boys and consoled families afterwards, reassuring them that their sons and brothers had died bravely, calmly. His ministry to hundreds of the condemned was vividly recalled after the war. In 1994, a square was named for him at the base of the Mont-Valérien killing field.

The young men—and women—who took up arms, metaphorically and realistically, against their oppressors were a minority. In fact, the resistance networks and movements in general were composed of but a small percentage of French citizens, despite Charles de Gaulle’s claim at the end of the war that a majority of the French people had “resisted.” Moreover, the Germans were so skillful at keeping resistance groups off guard that doubt remains as to how crucial they were in ridding France of their occupiers. Yet, their persistent encounters reminded their fellow citizens that to act was to remain free. To this point, French writer Jean Paulhanhas used a wistful metaphor: “You can squeeze a bee in your hand until it suffocates. But it won’t die before stinging you. That’s not so bad, you say, not bad all. But if didn’t sting you, bees would’ve disappeared a long time ago.”

Today, televised scenes of youthful marchers and demonstrators in Algiers, Hong Kong, Istanbul, and in our own nation, should bring to mind their predecessors in occupied France. It is why we must revive the memory of their deeds and the price they paid. The young are often the first to challenge authority, to take to the streets, to put their lives and their careers on the line. They struggle to fashion a future that will happily replace the curdled present in which they live. Their impatience, their perceptive view of a better tomorrow, their faith in the power of solidarity, and their energetic fearlessness serve to remind us, adults, that hope is a thing, that change is possible, and that all good life begins with dreams.