Jeff Forret is professor and Distinguished Faculty Research Fellow at Lamar University. His latest book is Williams’ Gang: A Notorious Slave Trader and His Cargo of Black Convicts(Cambridge University Press). 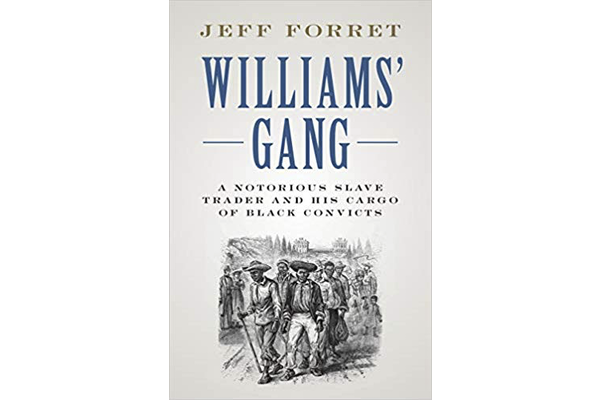 Along a bustling stretch of Independence Avenue Southwest in Washington, D.C., two modest informational panels adjacent to the sidewalk have marked, since January 2017, the site of the Yellow House, a former slave jail in the heart of the nation’s capital. There, enslaved people and abducted free blacks such as Solomon Northup were held as prisoners as they waited to be sold to the Deep South. Abolitionists were outraged that the slave trade was conducted mere blocks from the halls of Congress and turned to their elected representatives for redress. Political cynics may argue that moral bankruptcy is a long-time fixture in Washington, but at a crucial moment of national division, congressional leadership confronted the ethical embarrassment of the D.C. slave trade and eradicated it.

By the 1830s, Washington City had emerged as a leading depot for the domestic slave trade that sent enslaved men, women, and children from the Chesapeake to locations farther south and west. Several D.C.-based slave traders incarcerated bondpeople from Maryland and Virginia in private jails in the nation’s capital prior to shipping them, by land or by sea, to New Orleans and other points in the Deep South, where they brought higher prices.

Starting in 1836, the most famous slave jail in Washington City belonged to trader William H. Williams. Dubbed the Yellow House, Williams’ compound consumed most if not all of the rectangular block between Seventh and Eighth streets and between B Street and Maryland Avenue, immediately south of the National Mall. It once stood on the block now occupied by the Federal Aviation Administration’s Orville Wright Federal Building, across the street from the Smithsonian’s Hirshhorn Museum.

The structures that today dominate the National Mall—the Smithsonian castle and museums; monuments to presidents and war memorials—did not exist when Williams commenced operations at the Yellow House. Thus D.C. travelers oriented themselves geographically around the towering, three-story, plastered brick Yellow House. Surrounded by ten- or twelve-foot walls, partly shrouded by trees, Williams’ slave pen stood as a prominent landmark readily visible from the U.S. Capitol.

The arresting sight of enslaved people, chained two by two in long lines known as coffles and forcibly marched from the Yellow House and Washington’s other slave jails, down Maryland Avenue, and across the Long Bridge over the Potomac, elicited frequent complaint. By the 1840s, the practice was so controversial that the transport of enslaved captives increasingly took place under cover of darkness or via horse-drawn coach to avoid offending public sensibilities.

Many were not only opposed to the visibility of the slave trade: they wanted to abolish the slave trade altogether in Washington, D.C. In the mid-1830s, abolitionists ramped up efforts to extinguish the traffic. To advance their agenda, tens of thousands of American citizens seeking to terminate the D.C. slave trade petitioned Congress. Perhaps, the abolitionists mused, they could count on congressional leaders to display the requisite strength, courage, and moral fortitude to stand on principle against the evils of human bondage.

From 1836 to 1844, Congress toiled under the self-imposed “gag rule” that precluded discussion of petitions dealing with the politically divisive matter of slavery. But by 1850, a proposal to end the D.C. slave trade was included in measures that together composed the Compromise of 1850. If enacted, the proposed abolition of the D.C. slave trade would have a uniquely devastating impact on William H. Williams because, after the retrocession of Alexandria back to Virginia in 1846, his Yellow House remained the busiest slave jail in the District by far.

Members of Congress divided sharply over the proposed bill to end the trade. Those representing slaveholding interests in the Deep South opposed any such measure. Senator Jefferson Davis criticized the bill, noting that Williams’ slave jail “is a comfortable looking house.” Davis thought it “Rather a boarding-house in its aspect than a prison.” With a “spacious yard” and a “growth of poplar trees” surrounding it, the Mississippi senator concluded cheerily that Williams’ slave pen “look[ed] as little like a jail as any residence in the city of Washington.”

In reality, Solomon Northup and other inmates of the Yellow House described it as a site of physical and emotional terror.

Whereas Davis refused to acknowledge basic truths about the Yellow House, other congressmen understood the unspeakable horrors that the enslaved suffered behind its heavy iron gates. Representative Joshua R. Giddings of Ohio, an avowed abolitionist, personally visited Williams’ slave jail in an attempt to retrieve one of the many free black individuals kidnapped and imprisoned there prior to their transport south for illegal sale. As Giddings recollected, the formidable structure’s “gloomy walls . . . retained all the horrid barbarity of the darker ages.”

Between proslavery and abolitionist members of Congress were those such as Kentucky senator Henry Clay, an elder statesman with more than forty years of experience in Washington. “I have never visited one of these depots,” Clay confessed of the District’s slave jails. He nevertheless opposed them because, despite owning enslaved people and representing a slave state, he recognized the Yellow House and other similar establishments as “nothing more nor less than private jails, subject to no inspection of public authority, under the exclusive control of those who erect them.” Inside, “the owner of the jail” was law, imposing “police regulations” over the enslaved prisoners as he saw fit, absent any external oversight. No proslavery radical, Clay found the traffic in bondpeople in the nation’s capital objectionable and concurred with the notion that it brought “some degree of odium on the District.”

It fell to Clay to shepherd the bill abolishing the D.C. slave trade through the U.S. Senate. It was no easy task. Rumblings out of South Carolina in 1850 raised the prospect of secession and civil war. Already, sectional tensions over slavery threatened to rend the country in two. As the architect of the Compromise of 1850, Clay saw the abolition of the slave trade in Washington as the northern counterpoint to the proposed fugitive slave bill, which was intended for the exclusive benefit of southern enslavers. He also understood that the compromise offered different measures so offensive to each portion of the Union that it could never pass if all of its components were bundled together as an omnibus bill. Clay therefore disaggregated the compromise into its constituent parts and held separate votes on its individual provisions. Through this process, the act abolishing the slave trade in Washington, D.C. cleared the Senate by a 33-19 margin. Predictably, all opposition came from slave-state senators. Only Clay, fellow Kentuckian Joseph R. Underwood, Thomas Hart Benton of Missouri, and Sam Houston of Texas voted in favor despite representing a slave state. So passed the last piece of the Compromise of 1850.

The law that eradicated the slave trade in Washington, D.C., dealt William H. Williams’ operations a fatal blow. By the time it went into effect on January 1, 1851, some Washington slave dealers had relocated across the Potomac to Alexandria to continue operations lawfully there. No evidence survives to indicate that Williams did the same; rather, the change in the law prompted his retirement from slave trading after some twenty years in the business.

In 1854, Henry Wilson, who would soon represent Massachusetts in the U.S. Senate, visited the site where the Yellow House had long stood. Within four years of Congress outlawing the D.C. slave trade, the Washington cityscape was cleansed of Williams’ slave pen. An enterprising businessman was utilizing the former site of the slave jail to engage in an immeasurably more pleasant trade. As Wilson recorded, “flowers were blooming where the slave once sighed,” and a sign advertised “Flowers for sale and bo[u]quets made ‘to order.’”

Congressional action had inspired positive change. The ugliest humanity had to offer yielded to beauty, an auspicious sign for Henry Wilson and his fellow abolitionists. “I hope,” Wilson prayed, “but a few years more shall pass until every spot wherever the groans of human bondage are heard shall be a garden in which the blossoms of freedom shall make glad the eye, and the accents of hope delight the ear.” Ultimately, however, that grand vision would not be effected by members of Congress pursuing the morally correct course but by a civil war that cost three-quarters of a million lives.