Geoffrey Roberts is Emeritus Professor of History at University College Cork, Ireland. His book (co-authored by Martin Folly and the Oleg Rzheshevsky) Churchill and Stalin: Comrades-in-Arms during the Second World Waris published by Pen & Sword Books. 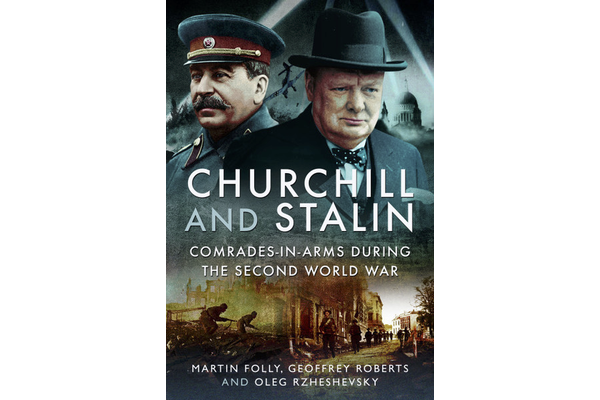 The alliance of Britain, the United States and the Soviet Unionduring World War II is often presented as a fragile necessity. The alliance was forced into existence by Hitler and fell apart as soon as Nazi Germany was defeated. But neither the formation of what Churchill later called the Grand Alliance nor its collapse was inevitable. The Grand Alliance was willed into existence by its leaders and then sustained through four years of total war. It was one the most successful alliances in history.

When the Grand Alliance emerged following the US and Soviet entry into the war in 1941, it was not clear that such an unlikely coalition could survive the vicissitudes of war. The three countries had very different socio-political systems and there was a long history of ideological conflict between Soviet communism and western liberal democracy. Within western states there were anti-communists hostile to alliance with the old ideological enemy, while on the Soviet side there were deep suspicions of western capitalist leaders. The Grand Alliance also had to deal with Hitler’s efforts to sow seeds of doubt by spreading rumours that each of the allies was negotiating a separate peace with the Germans.

There were significant internal tensions during the coalition’s early years, mainly because most of the fighting was being done by the Red Army, while the British and Americans fought on the margins of the conflict. But increasing amounts of western material aid did reach the USSR beginning in 1943, and in June 1944 the western allies invaded northern France – an operation Moscow had been demanding since July 1941.

The Grand Alliance overcame these difficulties because of the leadership of the so-called Big Three: Winston Churchill, Franklin Delano Roosevelt and Joseph Stalin – leaders prepared to put aside ideological differences in the interests of a greater cause.  The social background, personalities, politics, leadership styles and working methods of the Big Three were diverse. But they had one important trait in common: they were men of long political experience who placed a high premium on personal relations with each other.

Personal contact between the three leaders – at meetings, through correspondence and via intermediaries – convinced them they could work together and trust each other. At times that trust and friendship was strained but difficulties were overcome and differences resolved through compromises that respected honour and protected vital interests. The Grand Alliance as it developed during the war is unimaginable without this personal bond between Churchill, Roosevelt and Stalin.

Power in the Grand Alliance lay with Roosevelt and Stalin. As Churchill famously said, it was the Red Army that tore the guts out of Hitler’s war machine, while it was American industrial might and manpower that tipped the balance of forces decisively in the allies’ favour. But the beating heart of the Grand Alliance was Churchill’s relationship with Stalin. As US ambassador Averell Harriman recalled, while Stalin admired and respected Roosevelt and praised him as a “great man for war and a great man for peace”, Churchill he toasted as “my comrade-in-arms.”

Stalin’s relations with Churchill were fragile but intimate and intense. Churchill was a mercurial personality and his relations with Stalin were volatile. He had a history of militant anti-Bolshevism and was unapologetic about it. Yet Stalin, a dedicated communist, wanted Churchill to win the 1945 British General Election and was shocked when he lost and did not return to the Potsdam summit after going home for the counting of the votes.

During the war the two men conducted a 500-message correspondence (two-thirds of the messages were Churchill’s) and Churchill travelled twice to Moscow – in August 1942 and October 1944 - for crucial bilateral meetings with Stalin. Famously, during their October bilateral the two men divided central and southern Europe into percentage-based British and Soviet spheres of influence.

At Yalta in 1945 the Big Three proclaimed their commitment to a peacetime Grand Alliance that would prevent war and provide peace, security and prosperity for all states – a goal reaffirmed by the Potsdam summit and at the founding conference of the United Nations in San Francisco. After the war the collaboration continued. Major Nazi war criminals were tried at Nuremburg and convicted of crimes against humanity and of conspiracy to wage aggressive war. A peace conference was convened in Paris in summer 1946, and in 1947 peace treaties were signed with the Nazis’ wartime allies – Bulgaria, Finland, Hungary Italy and Romania.

Even when Stalin clashed publicly with Churchill following the now ex-Premier’s “Iron Curtain” speech in Fulton, Missouri in March 1946, but the two men never lost their affection for each other. When Field Marshal Montgomery visited Moscow in 1947 Stalin took the opportunity to give Monty a message for Churchill saying that he had the happiest memories of working with Britain’s great war leader. Churchill responded: “I always look back on our comradeship together, when so much was at stake, and you can always count on me where the safety of Russia and the fame of its armies are concerned . . . Your life is not only precious to your country, which you saved, but to the friendship between Soviet Russia and the English-speaking world.”

It is commonly assumed the cold war was inevitable, that once Hitler was defeated the conflicting interests and ideologies of the Soviet Union and the western powers inexorably drove the two sides apart. Despite his reputation as an early cold warrior, that was not Churchill’s view:  the main message of his iron curtain speech was the need for a good understanding with Russia. When he returned to power in Britain in 1951 it was as a peacemaker and an advocate of détente with the USSR. Jaw-jaw is always better then war-war, he said.

Nor was the cold war Stalin’s choice. Throughout the war the Soviet dictator stressed the long-term common interests – economic, political and military - of the partners in the Grand Alliance. An avid reader of historical works, Stalin told Churchill and Roosevelt at Yalta that “in the history of diplomacy I know of no such close alliance of three Great Powers as this.”

In spring 1947 the inter-allied Council of Foreign Ministers met in Moscow to negotiate Germany’s future. By the end of the year, however, negotiations about a German peace treaty had collapsed and the Grand Alliance was in the later stages of its disintegration. The failure of the Grand Alliance led to the cold war and to decades of division, conflict, and rivalry between the Soviet Union and its erstwhile western allies.

In the end the story of the Grand Alliance and its denouement in the cold war is quite simple. During the war its leaders choose to ally against a common enemy and then to carry the coalition forward into peacetime political collaboration. After the war different choices were made – including some by Stalin and Churchill – to pursue the separate as opposed to the common interests of the Grand Alliance. The result was the cold war.

The first set of choices saved the world from Hitler and the Nazis. The second set of choices plunged the world into decades of a potentially catastrophic conflict, whose vast nuclear arsenals continue to pose an existential threat to humanity.