The Forgotten Mass Destruction of Jewish Homes During 'Kristallnacht'

The forgotten mass destruction of Jewish homes during 'Kristallnacht' 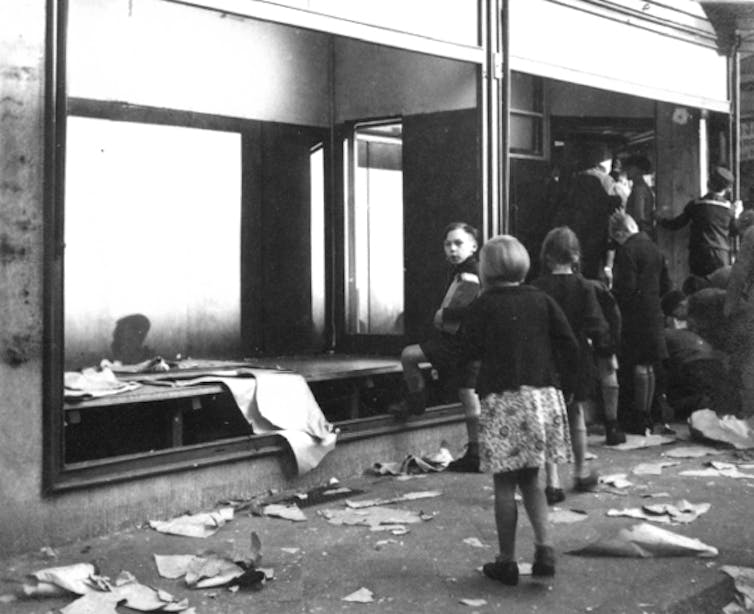 Every November, communities around the world hold remembrances on the anniversary of the Nazis’ brutal assault on the Jews during “Kristallnacht.”

Also known as “the Night of Broken Glass,” it’s one of the most closely scrutinized events in the history of Nazi Germany. Dozens of books have been published about the hours between Nov. 9 and 10, 1938, when Adolf Hitler and his propaganda minister, Joseph Goebbels, decided to unleash violence against Jews across Germany and the annexed territory of Austria with the aim of driving them out of the Third Reich.

Most accounts tend to emphasize the attacks on synagogues and shops, along with the mass arrests of 30,000 men. A few note the destruction of Jewish schools and cemeteries.

Attacks on Jewish homes, however, are barely mentioned.

It’s an aspect of the story that has rarely been researched and written about – until now.

A pattern emerges in survivor accounts

In 2008, when I arrived at the University of Southern California from Germany, I had been researching Nazi persecution of the German Jews for 20 years. I had published more than six books on the topic and thought I knew just about everything there was to know about Kristallnacht.

The university happened to be the new home of the Shoah Foundation and its Visual History Archive, which today includes over 55,000 survivor testimonies. When I started to watch interviews with German-Jewish survivors of the Holocaust, I was surprised to hear many of them talk about the destruction of their homes during Kristallnacht.

Details from their recollections sounded eerily similar: When Nazi paramilitary troops broke the doors of their homes, it sounded as though a bomb had gone off; then the men cut into the featherbeds, hacked the furniture into pieces and smashed everything inside.

In an interview recorded by USC’s Shoah Foundation that’s now in their Visual History Archive, Kaethe Wells explains how her family home was attacked by stormtroopers wielding axes during Kristallnacht.

Yet none of these stories appeared in traditional accounts of Kristallnacht.

I was perplexed by this disconnect. Some years later, I found a document from Schneidemühl, a small district in the East of Germany, that listed the destruction of a dozen synagogues, over 60 shops – and 231 homes.

These surprising numbers piqued my interest further. After digging into unpublished and published materials, I unearthed an abundance of evidence in administrative reports, diaries, letters and postwar testimonies.

A fuller picture of the brutal destruction of Jewish homes and apartments soon emerged.

For example, a Jewish merchant named Martin Fröhlich wrote to his daughter that when he arrived home the afternoon of that fateful November day, he noticed his door had been broken down. A tipped-over wardrobe blocked the entrance. Inside, everything had been hacked into pieces with axes: glass, china, clocks, the piano, furniture, chairs, lamps and paintings. Realizing that his home was now uninhabitable, he broke down and – as he confessed in the letter – started sobbing like a child.

A systematic campaign of destruction

The more I discovered, the more astonished I was by the scale and intensity of the attacks.

Using address lists provided by either local party officers or city officials, paramilitary SA and SS squads and Hitler Youth, armed with axes and pistols, attacked apartments with Jewish tenants in big cities like Berlin, as well as private Jewish homes in small villages. In Nuremberg, for example, attackers destroyed 236 Jewish flats. In Düsseldorf, over 400 were vandalized.

In the cities of Rostock and Mannheim, the attackers demolished virtually all Jewish apartments.

Documents point to Goebbels as the one who ordered the destruction of home furnishings. Due to the systematic nature of the attacks, the number of vandalized Jewish homes across Greater Germany must have been in the thousands, if not tens of thousands.

Then there are devastating details about the intensity of the destruction that emerge from letters and testimonies from postwar trials.

In Euskirchen, a house was burned to the ground.

In the village of Kamp, near the Rhineland town of Boppard, attackers broke into the house of the Kaufmann family, destroyed furniture and lamps, ripped out stove pipes, and broke doors and walls. When parts of the ceiling collapsed, the family escaped to a nearby monastery.

In the small town of Großauheim, located in the state of Hesse, troops used sledgehammers to destroy everything in two Jewish homes, including lamps, radios, clocks and furniture. Even after the war, shards of glass and china were found impressed in the wooden floor.

In an interview recorded by USC’s Shoah Foundation that’s now in their Visual History Archive, Ruth Winick recalls how men in green uniforms burst into her family’s home, destroying just about everything inside.

‘Everything ravaged and shattered’

The documents I found and interviews I listened to revealed how sexual abuse, beatings and murder were commonplace. Much of it happened during the home intrusions.

In Linz, two SA men sexually assaulted a Jewish woman. In Bremen, the SA shot and killed Selma Zwienicki in her own bedroom. In Cologne, as Moritz Spiro tried to stop two men from destroying his furniture, one of the intruders beat him and fractured his skull. Spiro died days later in the Jewish hospital.

In a letter dated Nov. 20, 1938, a Viennese woman described her family’s injuries to a relative:

“You can’t imagine, how it looked like at home. Papa with a head injury, bandaged, I with severe attacks in bed, everything ravaged and shattered… When the doctor arrived to patch up Papa, Herta and Rosa, who all bled horribly from their heads, we could not even provide him with a towel.”

The brutality of the attacks didn’t go unnoticed. On Nov. 15, the U.S. consul general in Stuttgart, Samuel Honaker, wrote to his ambassador in Berlin:

“Of all the places in this section of Germany, the Jews in Rastatt, which is situated near Baden-Baden, have apparently been subjected to the most ruthless treatment. Many Jews in this section were cruelly attacked and beaten and the furnishings of their homes almost totally destroyed.”

These findings make clear: The demolition of Jewish homes was an overlooked aspect of the November 1938 pogrom.

Why did it stay in the shadows for so long?

In the immediate aftermath of Kristallnacht, most newspaper articles and photographs of the violent event exclusively focused on the destroyed synagogues and stores – selective coverage that probably influenced our understanding.

Yet, it was the destruction of the home – the last refuge for the German Jewish families who found themselves facing heightened public discrimination in the years leading up to the pogrom – that likely extracted the greatest toll on the Jewish population. The brutal attacks rendered thousands homeless and hundreds beaten, sexually assaulted or murdered.

The brutal assaults also likely played a big role in the spate of Jewish suicides that took place in the days and weeks after Kristallnacht, along with the decision that tens of thousands of Jews made to flee Nazi Germany.

While this story speaks to decades of scholarly neglect, it is, at the same time, a testament to the power of survivor accounts, which continue to change the way we understand the Holocaust.