Billy J. Stratton, an associate professor and director of undergraduate studies at the University of Denver, holds a Ph.D. in American Indian studies from the University of Arizona. His Twitter handle is @billyjstratton. 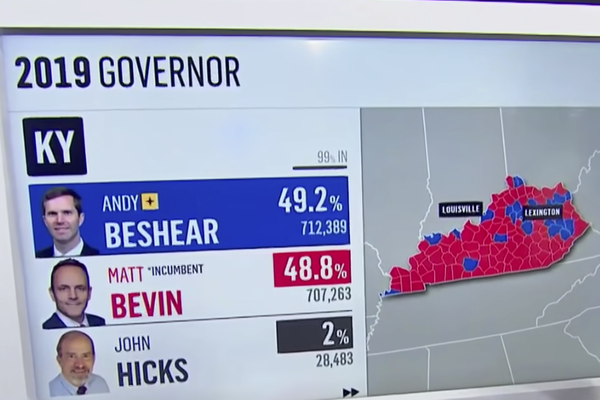 Conservatives dismiss it as an aberration, or maybe the natural consequence of an incompetent and unpopular incumbent. Liberals spin it as the GOP’s vulnerability going into 2020.

But Republican Gov. Matt Bevin’s narrow defeat this month in Kentucky – which Donald Trump carried by 30 points in 2016 – could mean something else, too:

Perhaps deep-red regions like Eastern Kentucky aren’t as reliable for Republicans and unwinnable for Democrats as conventional wisdom suggests.

Mainstream perspective – that these areas are politically intransigent – means they don’t draw serious campaign attention, that voters aren’t seeing due respect from candidates. The absence perpetuates a cycle, propping up those political assumptions about rural America while proving Lee Atwater’s riff on Marshall McLuhan: Perception is reality.

For those living in hidden-seeming pockets of Eastern Kentucky, where I was born and raised, the perception-turned-reality is that they don’t matter, that the country’s leadership doesn’t care about them or their needs. Over the long term, these perceptions help enable damaging, all-too-real conditions of rural poverty, unemployment and poor health care.

I know this to be true. I grew up with people who display fierce independence, quiet generosity and a suspicion of authority, while working hard and holding strong pro-union sympathies. Such was natural given the long history of struggle against the exploitation and destruction wrought by mining companies.

Yet politicians and public officials often benefit from popular images that paint a different picture, seeking to inflame social, cultural and political divisions as a means of maintaining power. While we point fingers at convenient hillbilly stereotypes, these divisions, and the injustices they produce, become only more widespread and destructive.

In reality, places like this aren’t as intransigent as the conventional wisdom would have us believe. Not all that long ago, Eastern Kentucky was a Democratic stronghold.

This historical preference is punctuated by wide margins of victory for Democratic presidential candidates in 1980, 1992, and 2000. In Floyd County, in the heart of Eastern Kentucky and an area that Democratic gubernatorial candidate Andy Beshear just won, Jimmy Carter's margin of victory over Ronald Reagan was 44 points, while Clinton claimed a 53-point advantage over George H.W. Bush. Likewise, Al Gore's margin over George W. Bush was 32 points.

Even as far back as 1972, despite what a writer like J.D. Vance would have the public believe, voters in Breathitt County, part of Eastern Kentucky’s coal-mining country, preferred George McGovern over Richard Nixon by a whopping 18 points. McGovern, who captured a paltry 17 electoral votes, lost Kentucky overall by 29 points.

Data like these urge a rethinking of the binary logic of red- and blue-state politics, an order that ultimately works to silence (and disempower) local populations and communities.

For me, such results were made clear in a more personal way by a tattered portrait of John F. Kennedy that my grandmother displayed on the wall of her front porch. This image seemed to convey a faith that there were politicians out there who really cared about the working poor, the plight of coal miner and the farmer who worked the hillside fields in the hollows.

But faith can't sustain action forever, especially in the absence of any tangible results.

It all makes me wonder: Is the current slant of rural voters toward the GOP – and Eastern Kentucky’s slant in particular – less about political ideology and more a natural consequence of feeling neglected? Or, worse yet, a result of having been betrayed and lied to?

As the presidential election cycle continues to heat up, especially in light of events such as Bevin's defeat, perhaps there’s a reminder here: that politicians should not turn their backs on rural voters. Assuming some monolithic ideology in rural America ignores the diversity and agency of entire communities.

Instead, politicians should work to reject political isolation. Speak to the issues, commit to change and, yes, campaign there along those narrow country roads, within those hollows. Seek to understand the history that has led us to the present, and give rural Americans the respect and commitment that come from fighting for them – and for their support.