Elizabeth Chilton, Dean of the Harpur College of Arts and Sciences and Professor of Anthropology, Binghamton University, State University of New York

Native people did not use fire to shape New England's landscape 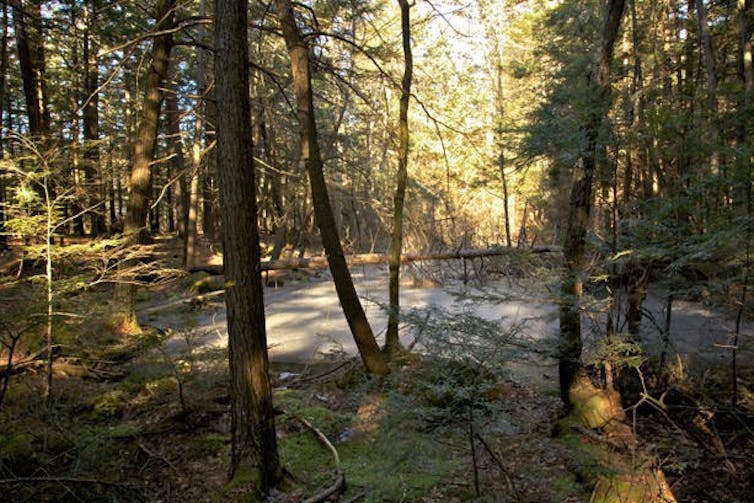 An interpretive sign stands at the edge of the Montague Plains Wildlife Management Area, a 1,500-acre state conservation property in central Massachusetts. It explains the site’s open land vegetation has been shaped by “millennia of fire” – and that the recent exclusion of fire has led to declines in this habitat and the species that call it home. It goes on to explain that fire is being reintroduced to the site through controlled burns “to reinvigorate fire-adapted species.”

The prescribed burning at Montague Plains and dozens of other conservation areas across New England is based on the belief that, for thousands of years, Native Americans cleared forests and used fire to improve habitat for the plants and animals they relied upon. The use of fire as a management tool is just one example of a broader shift in how ecologists and conservationists have come to think about the impacts of ancient humans. Increasingly, researchers believe Native people controlled ecosystems across much of the globe, from boreal regions to the Amazon, including many areas formerly deemed pristine.

Our new research, published in the journal Nature Sustainability, tests this human-centric view of the past using interdisciplinary, retrospective science. The data we collected suggest, in New England, this assumption is erroneous.

In the field of paleo-ecology, researchers take advantage of the fact that, over time, the bottoms of lakes and ponds fill up with mud. Using a hand-driven device, scientists can collect a cylindrical core of the sediment and then use radiocarbon dating to determine the age of the mud at different depths. Over the last century, scientists have collected sediment cores from hundreds of lakes around the world, enabling them to reconstruct past environments and ecosystems. 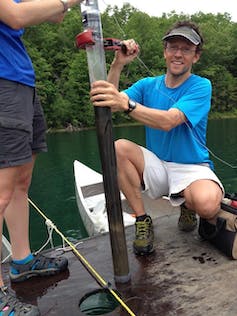 Our team of paleo-ecologists and archaeologists collected sediment cores from 23 ponds across southern New England. We analyzed ancient pollen grains, fragments of charcoal and clues about past water depth, all preserved in the mud, allowing us to create a record of vegetation, fire and climate over thousands of years.

We then compared this ecological and environmental history with data from more than 1,800 archaeological sites along the coast from Cape Cod to Long Island, including the islands of Martha’s Vineyard, Nantucket and the Elizabeth Islands. These areas historically supported the greatest densities of Native people in New England and today are home to the highest concentrations of endangered species and rare open land habitats in the region.

Our study contradicts the theory that people had significant ecological impacts in southern New England before European arrival. Instead, it reveals that old forests, shaped by climate change and natural processes, prevailed across the region for thousands of years.

Native populations in southern New England peaked at two times during the last several millennia: 5,000-3,000 years ago, during what archaeologists call the Late Archaic Period, and 1,500-500 years ago, a period known as the Middle-Late Woodland. During those times when Native populations were relatively high, we found no evidence for forest clearance, elevated use of fire, or widespread agriculture. Interestingly, fire activity was high only 10,000-8,000 years ago, a period that was substantially drier than today, with low human populations.

Of course, the indigenous people of New England utilized and relied on a wide variety of natural resources: they hunted, fished, foraged, and cultivated some edible plants. Pre-Colonial societies were complex, widespread and large, with populations in the tens of thousands. But the evidence suggests they didn’t use fire to open large swaths of the landscape for agriculture. Rather, over more than 10,000 years, these highly adaptable people shifted activities seasonally across the landscape, taking advantage of a wide range of resources and exerting limited, and most likely very localized, ecological impacts overall.

So, if Native Americans didn’t clear forests and create open lands across southern New England, how and when did the grasslands, shrub lands and open forests in existence today originate?

When we analyzed the mud in our study ponds, we found the obvious signature of forest clearance by 17th-century European colonists. Pollen from forest species declined, while pollen from agricultural and weedy species, like ragweed, increased abruptly. This evidence clearly shows New England’s open land habitats owe their existence to Colonial European deforestation and agriculture, especially sheep and cattle grazing, hay production, and orchard and vegetable cultivation in the 18th and 19th centuries. 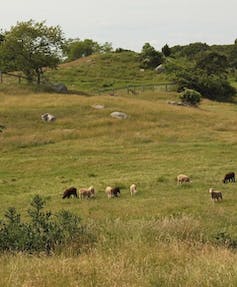 This retrospective research should cause some conservationists to reconsider both their rationale and tools for land management. If the goal is to emulate the conditions that existed prior to the arrival of Europeans, land managers should allow New England forests to mature with minimal human disturbance. If the goal is also to maintain biodiverse open land habitats, like Montague Plains, within the largely forested landscape, managers should apply the Colonial-era agricultural approaches that created them nearly 400 years ago. Those tools would include mowing, grazing and cutting woody vegetation – but not burning.

[ You’re smart and curious about the world. So are The Conversation’s authors and editors. You can get our highlights each weekend. ]