The Lynching of David Wyatt

Former Belleville area resident Greg Bailey is the author of  the forthcoming The Herrin Massacre of 1922: Blood and Coal in the Heart of America  and the novel Darryl Ray which is set in Belleville. 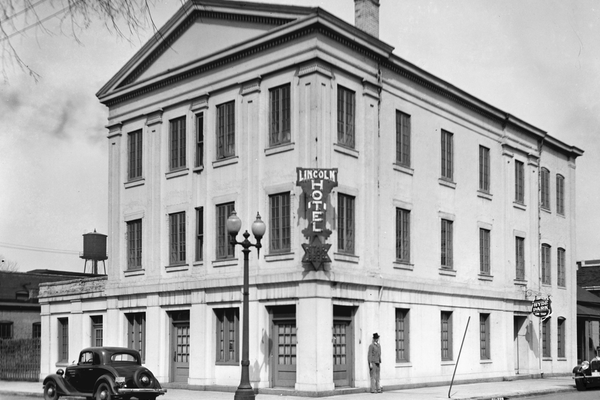 At the turn of the last century Rev. Charles Thomas of the African Methodist Church was the unofficial leader of the 500 or so African Americans living in Belleville, Illinois, across the Mississippi river from St. Louis. He and his flock had a small presence in the largely German-heritage cities of the Illinois side of the metro region. At the time even East St. Louis was by far mostly white but black people were slowly moving into the area, attracted by the growing industrial economy including the then booming stockyards. Black people suffered from de facto segregation, with white and black areas strictly if informally divided.

Whatever his motive, whether it was to strike an early blow against discrimination or just a matter of pride, Rev Thomas entered the all-white barber shop of Henry Baumgarten in downtown Belleville and asked to have his boots shined. After Baumgarten refused the Reverend sued him for $200. Even though Thomas lost the case and filed an appeal, the incident created great resentment in the majority white area. Black people were not welcome in Belleville, a fact brought home with every hostile look and verbal assault. The stage was set for a greater incident and the spark came unexpectedly.

By 1903 enough black people had settled north on the Illinois side of the river to establish the village of Brooklyn as the first black-majority community.   One of its leading citizens was David Wyatt, a schoolteacher and principal. Wyatt was a noted orator and community leader. Among other accomplishments he opened the school to adult learners, a program ahead of its time. So it must have come as a shock when Wyatt was notified his teaching license would not be renewed by the County Superintendent of Schools.

St. Clair County was, much as it is today, one of the most diverse jurisdictions in the country. On its western edge along the Mississippi were densely populated urban areas many of which would develop into some of the worst slums in America. Moving east over the top of the river bluffs were the small, established towns like the county seat of Belleville. On the eastern edge were and are farms and bucolic small towns seemingly a world away from the rest of the county.

On June 6, 1903 Wyatt travelled to the courthouse to confront Superintendent Charles Hertel. Although it was a Saturday, Wyatt found Hertel working in his office. In a heated exchange Hertel told Wyatt his license would not be renewed because of allegations of abuse against his students. Wyatt left the office.

Around 6 pm Wyatt returned to the courthouse, entered Hertel’s office and shot him in the chest with a revolver. Hertel’s secretary and his son grabbed Wyatt, and held him until the police lead him away to the nearby county jail. The sound of the shot and the sight of a black man being dragged away from the courthouse set off anger among the passersby.  As the crowd gathered the false rumor that Hertel had been murdered spread fueling the growing anger and calls to ‘lynch the nigger.’

A self- appointed corps of men decided to carry out the mob’s wishes. Wyatt had been safely locked in a cell behind secured doors., but soon the sound of the jailhouse door being battered by a sledge hammer rang out to the streets. Small boys stood at open windows delivering progress reports to the crowd below.  For hours the mob worked battering down the doors and then the cell as Wyatt loudly begged for mercy or prayed to God. The mob broke the final cell door and swarmed over Wyatt.

He was dragged out of the building and into the street leading to the courthouse square. By now thousands were watching and cheering as St. Clair county officials, including the State’s Attorney, watched.  Belleville police also stood by under orders not to fire into the mob. The fire department was blocked by the crowd who tied knots in the hoses to prevent them from spraying water to break them up.

Details of exactly what happened next vary in press reports. Wyatt was dragged a few blocks to either a telephone or telegraph pole where he was lynched. Either before or after the actual lynching a fire was prepared under the body. Whether he was already dead or as some said barely clinging to life, Wyatt’s body was burned as the crowd cheered loudly. What little was left of him was taken to the dump. An estimated 10,000 people from all over the region visited the site of the lynching.

The lynching of David Wyatt provoked a national reaction from New York to Chicago. Some wondered how such a thing could happen so far north. Belleville clergymen hastily rewrote their sermons to denounce the action. City police and county officials who witnessed the attack did almost nothing. Fourteen members of the mob were arrested and let out on bail until the charges were quietly dropped. That was fine by most people in Belleville. Two weeks after what the mayor of Belleville called a “somewhat irregular execution,” George R. Long, president of the local Good Government League said, “I think the matter better be dropped. I am tired of the vilification of Belleville. I am against mob law under all circumstances but I believe the negro got what he deserved. ” One of the few who dared to disagree was Charles Hertel, who fully recovered from his gunshot wound and regretted the lynching.

After the lynching the thinly veiled hostility against Rev. Thomas and his small flock turned to open death threats. Black people were told in no uncertain terms to get out of Belleville.  Rev. Thomas gave his guns to his congregation and fled the town in the middle of the night.

In the century plus that has followed, things have gotten better in Bellville and the county. For example, an African American was appointed chief of police in Belleville. Race relations are for the most part peaceful, but there is still a geographical division in the region. Many white people in Belleville and the relatively new town of Fairview Heights trace their roots to East St. Louis before moving en masse to the east and abandoning the once prosperous city.  But under the surface, many whites still see black people as the other, the people that don’t quite belong in Belleville. In Ferguson, on the other side of the river, everything was fine until it wasn’t. This is the challenge Belleville must face. The history of David Wyatt is a stark warning for Belleville and the region, and a lesson not safely forgotten.