What if Trump Refuses to Leave?

Richard Striner, a professor of history at Washington College, is the author of many books including Father Abraham: Lincoln’s Relentless Struggle to End Slavery and Lincoln’s Way: How Six Great Presidents Created American Power. His latest book is Summoned to Glory: The Audacious Life of Abraham Lincoln. 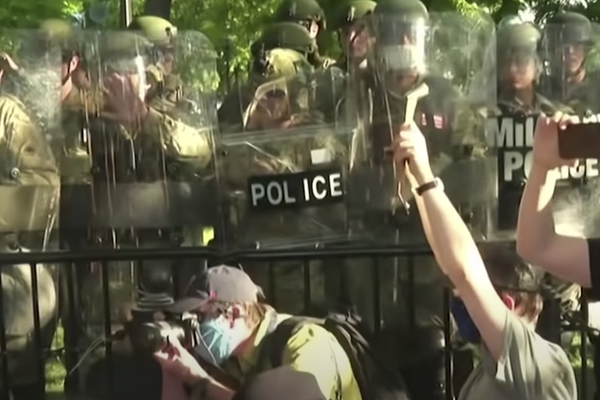 But we have never had a fascist in the White House before, and so we need to do some very hard thinking. Donald Trump is a dangerous authoritarian who is testing how far he can go in the use of armed force for his own political ends.

And a show of force may determine the fate of our democracy a few months from now. If Trump loses the election, we should not expect a peaceful transition in accordance with American traditions. We know what we will get from Donald Trump: a tantrum, followed by defiance. He will call the election a “hoax” and then proceed to put the nation through a crisis that will make the past three years look mild by comparison.

He has talked already of delaying the election and dropped dark hints about how far his powers may extend in a “national emergency.”

So we should brace ourselves for much more than a delayed or contested election. We need to imagine an end-game without any precedent and figure out now what to do if this scenario becomes a reality next year.

What if Trump just refuses to vacate the White House if Biden legitimately wins?  Who would have the power and authority to remove him using physical force?  Have you ever thought about that?  Has anyone?

It turns out that Joe Biden has been thinking about it, and he just announced that the military will “escort” the defeated incumbent from the White House if it proves to be necessary. Presumably, Biden himself would give the order.

When adminstrations change (and especially in cases where a president is not re-elected), there are laws on the books that control the transition — laws that have been crafted by successive Congresses. Contingency planning for a possible transition is occurring right now in key government agencies, pursuant to the law.

A Joint Congressional Committee on Inaugural Ceremonies (JCCIC) plans and conducts the Inauguration itself as the transition planning moves into high gear between Election Day and Inauguration Day.

Given what we know of Donald Trump, it is easy to imagine him freezing the process by executive order. A blizzard of tweets about the “hoax” would go out to his followers — ugly, defiant, and hallucinatory, for his mental state is quite tenuous, as mental health professionals have been warning since 2016.

There is no use pretending that any of this couldn’t happen. Remember the way he responded to that question back in 2016 — the question he was asked before Election Day — as to whether or not he would respect the results of the election. His answer was yes — if he won.

He didn’t seem to be joking.

So we need to prepare for this scenario, but in doing so we need to think about specifics: how would the scenario play out between November and January?  And the answer is: chaotically, because Trump’s mental process is chaotic. From the outset, he has made things up at random as he goes along — pouncing on random opportunities for chaos, which he goes on to shape as he pleases as the basis for aggrandizing more power.

He may very well be pondering this overall scenario now, but if this crisis comes to pass, he will conduct himself as he always does: he will test to see how far he can go and how much he can get away with. And this means that the situation could become very dangerous as Inauguration Day approaches. Having given himself no line of retreat, he could have a melt-down that goes beyond anything we have seen: his mental state could plunge over the edge.

And now he threatens to send troops to “dominate” the streets of our cities against the wishes of mayors and governors. Never mind that he quickly backed down, for in a corner he will never back down.

So what would happen if Trump becomes completely deranged and orders troops to seal off the White House if Biden wins the election?   We can take quick comfort in the thought that whoever is serving as defense secretary would see that such orders are not carried out, but . . . who knows?

Even if things never get that far, Inauguration Day would present a very sorry spectacle. Trump would boycott the proceedings and proclaim that he is still president. Perhaps armed members of his “base” would come to town to create a bit of mayhem.

Joe Biden’s solution to the problem would be simple and direct, but another solution could be used if anything goes wrong.

Back in 1973, the Senate Watergate Committee had served some subpoenas on Richard Nixon — the first time in American history for that to happen. The subpoenas were delivered by U.S. Capitol Police to the building next to the White House known in those days as the “Old Executive Office Building,” and White House staffers received them.

One subpoena required the testimony of White House aides and Nixon flatly refused to comply, citing “executive privilege.”  Senator Sam Ervin, the chair of the committee, threatened to send the Senate sergeant-at-arms to the White House, arrest the aides in question, bring them to the bar of the Senate for trial, and compel testimony.

So on Inauguration Day, after Biden takes the oath of office, an armed force of U.S. Capitol police could be sent up Pennsylvania Avenue. Backed by the authority of Congress — which has, in addition to the clear constitutional duty to announce the results of the Electoral College vote, the additional power under law to take charge of presidential transitions — these officers would be confronted by officers of the Uniformed Division of the Secret Service at the gates of the White House.

What would happen then: an armed stand-off?  Probably not, since a new president would have taken the oath and most members of the Secret Service would in all probability keep their wits about them and be sensible — or so we can hope.

Regardless, by any means necessary, the Capitol police would gain entry the White House, apprehend Trump, and then remove him, with a modicum of digity if possible, in a straitjacket if necessary.

The point must be made yet again: in the case of Donald Trump, we are not dealing with a normal individual.

Mental health professionals warned about this before the 2016 election. After the election, as Trump’s bizarre behavior began to warp the operations of our government, people wondered for a while if the procedure laid down by the 25th amendment to the Constitution — which provides for the removal of a president who is incapacitated — might be used for the sake of our country. But of course that didn’t happen.

Then there came the attempt to remove him through impeachment. Thanks to Mitch McConnell, yet another opportunity to rid this country of the danger was thrown away.

Make no mistake: Donald Trump is very probably delusional. He may believe in every one of his lies. “Hoax” is what he calls every fact he doesn’t like, and we have seen this again and again. And way down deep he may believe it. Through an act of strange alchemy, a spell that he casts, he may talk himself into believing it.

This is dangerous. For the sake of our country, Republican leaders should have long since confronted a terrifying fact: a mentally unbalanced chief executive could start a nuclear war if he succumbs to dementia.

And these Republican leaders have consistently refused — with a smirk, they have refused.

If Trump is re-elected, we must brace ourselves to go right on thinking the unthinkable. We will live in dystopian America, where all bets are off for the duration and our normal way of life will be challenged as never before.

The reign of Nero will then begin in earnest.

These are not idle fears, for Trump’s mental illness leads him straight to sociopathological behavior: he  has the mind of a criminal. His contempt for the law has been all too clear, and his behavior will go beyond contempt.

What begins for Donald Trump as evasion of law becomes perversion of the law over time — he seeks to warp the very concept of law as he approaches the brink of megalomania — so that  his every word becomes law.

At the moment he is busily purging inspectors-general, so the law cannot impinge upon his actions or those of his henchmen.

It is time to do worst-case thinking in this very dark year as we ponder the state of our democracy, while we have it.