One Small View of a Big Picture

Arnold R. Isaacs is a writer living in Maryland. Formerly a local reporter, national correspondent and foreign correspondent for the Baltimore Sun, he is the author of two books relating to the Vietnam war and From Troubled Lands: Listening to Pakistani Americans and Afghan Americans in Post-9/11 America (available online at www.fromtroubledlands.net). His website is www.arnoldisaacs.net. 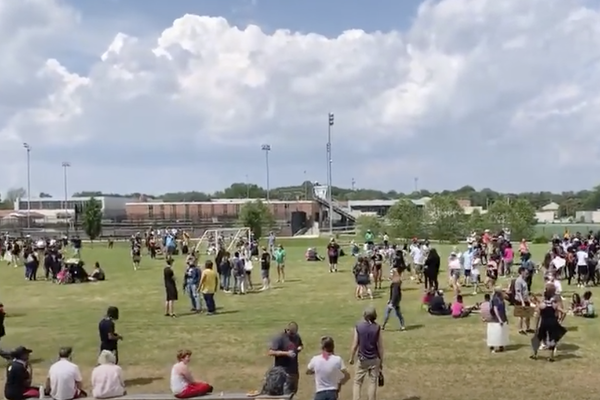 It's not an activity that comes naturally or comfortably to me, but when I learned that there was a black lives matter protest in Pasadena, Maryland, on the first Saturday in June, I could not avoid the thought that the more old white guys who showed up, the better. So, dutifully but not enthusiastically, I decided I had no choice but to go.

Pasadena is southeast of Baltimore city. We've lived there for 29 years. It's a pretty representative red area, though embedded in a blue state; basically suburban, mostly what I would call modestly comfortable neighborhoods with some more affluent pockets. The local population is well over 80% white, and votes pretty strongly Republican (I haven't found percentages but I know that in 2016 our district went for Trump by a pretty hefty majority). Yesterday's demonstration was on the grounds of Northeast High School, where the student body has a bit higher minority percentage than the community as whole but is still predominantly white. So was the crowd at the protest, which I would guess was not far off the same 80% mark as the community itself.

My most heartening moment happened right after I got there, well before starting time, while crowd just beginning to gather. When I walked across the driveway from the parking area, I saw another old white guy sitting at a picnic table across from the parking lot wearing a red baseball cap with the name 101st Airborne stitched over the brim (the cap also sported a 5th Special Forces pin, though I didn't recognize that until later) and a black t-shirt saying "in memory of 58,479 brothers and sisters who never returned from the Vietnam War." He was talking to another guy sitting across from him, and I overheard him mention he had owned a fuel-oil and HVAC business until he sold a few years ago. That background and his age and apparent veteran status did not put him in the expected demographic category for this event. Indeed, when I first saw him I fleetingly wondered if he might be there to counter-protest, though nothing in his appearance or manner suggested any such thing.

Eventually he looked over at me, nodded and said hello, and we struck up a conversation. In our talk I learned that he is now 75, was born in Germany and adopted and brought to the U.S. by an American soldier (this would have been fairly soon after WWII). He told me he was motivated to join the army as a way to "repay" his stepfather and this country, ended up doing an 18-month tour with a Special Forces unit in Vietnam, and later started the business I had heard him speak about.

When I asked him what had brought him to this protest, his answer could have come just about verbatim from Gen. Jim Mattis's recent anti-Trump commentary, which I expect most readers of this essay will have read. Exactly like Mattis, the first thing this guy said to my question was to recall that when he joined the service he took an oath to protect the U.S. Constitution, and that's what he was here to do all these years later.

I didn't pursue that enough to get clear exactly which constitutional rights he was thinking about, racial justice issues or the right to peaceful protest, or whether he was motivated by a more general commitment covering both of those. I may take a stab at that question if I have any further contact (I have his name and a phone no. so that is a possibility). Whatever the answer, though, it gave me a better feeling about my country and community to find a guy like that in this setting at this time, and I told him so.

Another encouraging moment, still while folks were arriving at the gathering place, was when I noticed another white guy, this one young, maybe in his mid-20s, holding up a large hand-lettered sign that said "Black Lives Matter More Than White Feelings." Underneath that slogan, in smaller letters, another line, as I remember in lower-case letters, said: "check your privileges." During the afternoon I sensed that a lot of the white folks in that crowd, many carrying signs with similar sentiments, apparently were doing just that, thinking about and acknowledging their privileges, though whether they were newly aware or just new to speaking about it to others, I have no way to know.

I asked the guy if the slogan was his, but he said he had copied it from a t-shirt. He told me he works as a landscaper at Fort Meade, an army base (and headquarters of the National Security Agency) that's not in Pasadena but a few miles west. He wasn't the only demonstrator to have come over from Meade; as I gathered, a fairly large contingent had come from there to join the protest.

The demonstration itself began with a rally on the large park-like lawn south of the high school stadium. At the start I thought there were maybe 400 to 500 people there, spread out, as the organizers repeatedly exhorted, to maintain virus-related social distancing. By the time they began moving off the lawn to start a mile-long march circumnavigating the school campus, the crowd looked closer to a thousand, to my eye. Whatever the exact number, it struck me as a pretty remarkable turnout of mostly white people at a civil rights-related event in this mainly white, conservative area. Quite a few in the crowd were teenagers. I can't verify this and don't know what might explain it, but my eyeball estimate was that among the teenagers there were a lot more girls than boys.

A noticeable feature at the rally was a strenuous pitch by both organizers and the county police exhorting cops and demonstrators NOT to be antagonists but to accept and welcome each other. The county police chief, speaking at the organizers' invitation, told the crowd, "We're not here to stifle what you do, we're here to protect you while you do it." Various organizers, in their speeches, specifically and repeatedly urged the demonstrators not to bait or provoke the police.

Consistent with that message, the police presence was fairly sizable but not overwhelming, and commanders had obviously taken pains to deploy it in the most unprovocative and unthreatening way possible. Officers wore regular uniforms, no helmets or military-style gear. Instead of large, intimidating soldier-like formations, they stood casually in groups of six or eight, irregularly and fairly widely spaced around the perimeter of the rally and along the parade route. Only a few police vehicles were parked on or near the streets where the march took place.

On Fort Smallwood road, the main thoroughfare that goes past the school, a few officers rode quite carefully on bicycles alongside the line of marchers, gently keeping them from spreading out too far into the traffic lanes. The bicycle cops, like those standing along the route, spoke courteously and pleasantly to the demonstrators, sometimes waving or giving approving nods. After we turned the corner onto Duvall Highway -- not actually a highway but an ordinary suburban street -- I saw a woman in civilian clothes, possibly a cop or a cop's wife, standing along the street holding a sign that said "Good cops support you."

That easygoing civility was reciprocated by the protesters, with no exceptions that I saw. Up and down the column plenty of them were chanting slogans generically denouncing police racism and brutality, but no one I saw directed those chants or aimed any criticism or anger at the officers on the scene. None of the news coverage I've seen reported any such incident, either.

One other note to add on this subject: I didn't count the cops I saw, probably was up in the dozens. I wouldn't swear to this but looking back, the number of black cops I remember seeing was... one.

Along the route, a fair number of passing cars -- I would say a substantial minority, though not a majority -- slowed as they drove by while drivers honked their horns and passengers rolled down their windows to wave and cheer at the column of marchers. I suppose the ratio of cheers from folks driving past might have been higher after a winning football game. But there were more salutes than I would have guessed in this community. I saw no hostile gestures myself, though I did see news reports later describing one or two folks who shouted Donald Trump's name from their cars as they went past.

Walking past those groups of cops, it occurred to me that at this particular moment many police officers must be feeling like victims of negative stereotyping. Across the country, cops who have done nothing wrong and feel they are honestly protecting the public are being judged not by their own character and conduct, but are being tarred with the same brush as the brutal racists and criminals in their tribe.

I had not thought of it in exactly these terms before, but looking at the police along the protest route it occurred to me that that is an exact equivalent of the common experience of African Americans, especially young men, who live every day with the fact that the larger society and those looking straight at them personally -- such as cops -- don't see them as who they are, but only as stereotypes drawn from the worst elements of their community. Just as cops are being seen by large numbers of civilians these days.

I tried that thought out on a couple of the county officers along the protest route, wondering if any of them might agree or had already made the same comparison. I didn't find any takers, though one sergeant said to me, a little ruefully, "yeah, I get stereotyped. I get stereotyped every day."

Obviously there is no way to know where history is going when you're watching it happen. Before that Saturday I would not have guessed that this many white people in this community would be activated in this way by these events. Seeing them there was encouraging, and not in a small way. I wouldn't have guessed that the national white reaction would be as widespread and strong as it's been, either, and that's encouraging too.

Presumably we will be getting a better idea in the coming months whether this is the beginning of a true historic sea-change or a strong but passing storm. We can't know the answer to that, but we can know -- and I feel I do know at least a little more clearly than I did before -- what the change may look like, and what we can hope for.