The Vexations of History In An Age of Police Violence: A Ventura County California Perspective

Frank P. Barajas is a professor and chair of history at California State University Channel Islands. His forthcoming book is titled Mexican Americans with Moxie: A Trans-Generational History of El Movimiento Chicano in Ventura County California, 1945-1975 (University of Nebraska Press). 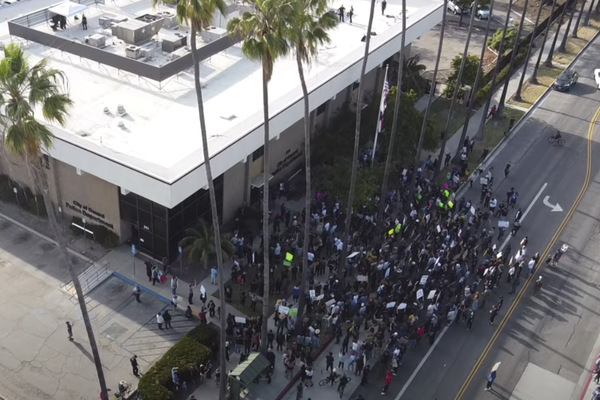 Consequently, any City of Oxnard official who empathetically condemns the killing of George Floyd by Minneapolis police must also memorialize their deaths. Especially Robert Ramirez, who like Floyd and Eric Garner in New York, could not breathe. The medical examiner of Ventura County determined his death a police homicide from prone restraint asphyxia—choking.

Only then can we, as a community, have an authentic conversation on police violence elsewhere.

Meanwhile, we ought to recognize the ways in which the legacies of historical systems of white supremacy continue today in the disproportionate mass incarceration of people of color due to racist and sexist institutions of education, the administration of justice, health care, housing, and employment. This fact is easily proven by noticing who dominates such leadership posts as well as enjoys such privileged life chances.

Academics such as Rodolfo F. Acuña, Michele Alexander, Roxanne Dunbar-Ortiz, Eduardo Bonilla-Silva, Ronald Takaki, and others have long written on the historical echoes and rhymes of slavery, the genocide of Native American peoples, and the wars of conquest over the territories of Mexico. In fact, as Henry David Thoreau argued in Civil Disobedience (1849), these are the original sins of our nation, for which recent trespasses have demonstrated we have yet to atone.

Instead a societal amnesia, if not a denial, persist.

As we denounce the ruthless killing of not only George Floyd but also Ahmaud Arbery in Georgia, and Breonna Taylor in Kentucky, the people of Ventura County must also reckon with the past before any reconciliation can be pursued.

For instance, in July of 1971 residents of Oxnard’s La Colonia neighborhood revolted against the Oxnard Police Department. For two consecutive Sunday nights, Chicano youth confronted the police with epithets, rocks, bottles, and sniper fire. In the process, buildings were set ablaze. It got so bad that law enforcement back up was called in from neighboring cities.

The next year, Chicano youth of Santa Paula similarly resisted police abuse in and out of the downtown district for at least three consecutive Sunday nights. Young men and women also cursed the police, exchanged gunfire, and shattered the windows of schools and businesses. To quell the insurrection and maintain the peace over the next month, Santa Paula Police Chief Ray Tull depended on reinforcements from the California Highway Patrol, the Ventura County Sheriff’s Department, and the police departments of Oxnard, Ojai, Port Hueneme, and Ventura.

In both instances, Oxnard and Santa Paula city officials proclaimed ignorance of the root causes of the rebellions. Instead, they deflected responsibility and blamed the actions on outsiders. The righteous indignation of Chicano youth and their elders, however, would not be silenced.

The newspapers of the Oxnard Press-Courier and the Santa Paula Daily Chronicle reported on the courageous demonstrations of Chicano youth in front of police department buildings, their statements, and face-to-face conversations with the city councils and police chiefs. Their indictments encompassed incessant police harassment in the form of gruff contacts, provocations, and brutality. They also pointed to racism in schools as well as restricted recreation and job opportunities.

Although positive change resulted from the protest movements and dialogues of the 1960s and 1970s, a continuity of oppression continues in stark racial disparities in COVID-19 infections and deaths, access to health care, academic achievement, and lives sacrificed to the prison industrial complex.

In Oxnard, this past Saturday’s protest of George Floyd’s killing drew hundreds of people from all walks of life. Speakers linked racist policing tactics elsewhere to policing here. Resident Stephanie Turner, for example, decried the Oxnard police for the regular racial profiling of her Black sons. And an African American father spoke to how his wife feared for his life whenever he drove the community's streets.

As an educator and lifelong resident of Ventura County, I have heeded the testimonies of young people stopped and detained by police on bogus traffic infractions. One account detailed how a police officer yelled “stop resisting” as he beat a compliant detainee.

I, myself, as a fifty-year-old man, experienced a police contact that opened with the cavalier lie of an officer. Before this episode ended, I found myself surrounded by four cops.

In driving through Ventura County, I’ve witnessed detained motorists, usually adult men of color, sitting on the curb of streets, with their heads downcast in humiliation, as a coven of police with terminator-style sunglasses jocularly passes the time.

Quotidian experiences such as these are the tinder that fuels a visceral antipathy toward law enforcement.

A significant solution to ending police misconduct is for elected officials to stop fearing law enforcement unions who will brand them as soft on crime for publicly raising legitimate concerns. For example, when I criticized the City of Oxnard’s adoption of its constitutionally flawed civil gang injunction, council members confided with me their reservations with this tool.

But these elected officials dared not doing so in council chambers to avoid being targeted in their reelection campaigns by the Oxnard Peace Officers Association as anti-police or, worse, pro-gang.

But if more elected officials took stances that condemned misconduct on the part of law enforcement no matter the political fallout, such as in the case of Minneapolis Mayor Jacob Frey, city by city people of color will live their lives with a diminished fear for just being. Then a reconciliation can begin.