John F. Kennedy Did What Donald Trump Only Wishes He Could Do

Paul Matzko (PhD, Penn State ‘16) is Editor for Tech and Innovation at the Cato Institute. This material is excerpted from his book, The Radio Right: How a Band of Broadcasters Took on the Federal Government and Built the Modern Conservative Movement, out with Oxford University Press this month. 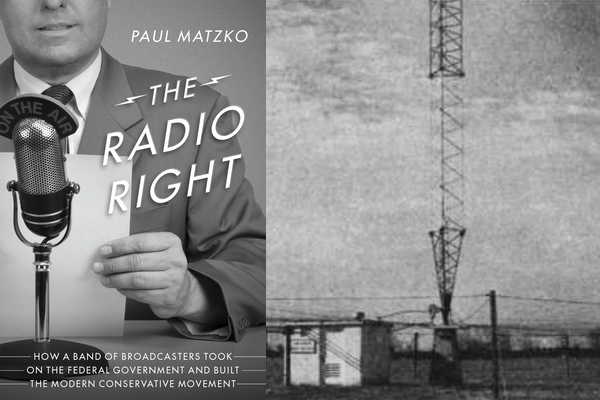 President Donald Trump has repeatedly wished that he could revoke the broadcast licenses of news organizations that air criticisms of his administration. This forced the chairman of the Federal Communications Commission (FCC) to announce that the FCC would not do so (even if it had the power to). It is easy to dismiss Trump’s tweets as yet another case of the necessity of taking the President seriously but not literally, to use journalist Salena Zito’s memorable phrase.

However, not all that long ago U.S. residents did have the power to censor those who broadcast criticisms of their administrations. In the early 1960s President John F. Kennedy used a set of FCC rules known as the Fairness Doctrine to mute conservative radio broadcasters. It was the most successful act of government censorship of the past half century that almost nobody has ever heard of.

To understand why Kennedy launched his censorship campaign, it is helpful to imagine yourself in the shoes of an ordinary American consumer in 1962. If you had gone shopping at a retail store that fall, you might have found small cards--bearing slogans like, “Always Buy Your Communist Products at Super Giant”--scattered all over the displays, perhaps inserted in toothpaste packaging or even nestled in the pockets of each item of clothing on the sales floor. They were the remains of a “card party,” a boycott action organized by conservative, suburban housewives from all across America. In a display of what historian Michelle Nickerson has called “housewife populism,” these mothers and wives--and they invariably signed their protest letters with the honorific ‘Mrs.’--believed that they had an obligation to protect both the domestic and national homes from corruption.

The corrupting influences in this case were imported goods from Communist-dominated Eastern Europe, a wave of Yugoslavian wicker baskets, Hungarian folding chairs, and Polish hams. Late in 1961, President John F. Kennedy had initiated a new trade policy with these countries in hopes of peeling them away from the Soviet sphere of influence. But conservatives believed that Kennedy’s free trade policy actually advanced Communist interests.

The backlash against Kennedy’s Eastern European trade policy began with a Miami chiropractor who started a small boycott organization with a large name, “The Committee to Warn of the Arrival of Communist Merchandise on the Local Business Scene.” And it might have remained a minor, regional protest notable only for its clunky acronym (TCTWOTAOMOTLBS), but in the summer of ‘62 a loose network of Right-wing radio broadcasters picked up the story of the boycott and amplified it.

Nothing quite like what I call the “Radio Right” had ever previously existed in terms of scale and scope. By the early 1960s, a dozen conservative broadcasters aired on at least a hundred radio stations nationwide. The largest of them, the Rev. Carl McIntire, based out of Collingswood, NJ, reached an estimated weekly listening audience of twenty million people (for sake of comparison, that is as many as would listen to Rush Limbaugh nearly half a century later). The Radio Right acted as a megaphone for the boycott, resulting in local chapters of the organization popping up in 260 towns across all lower 48 states by the fall of 1962.

The card party protests and letter-writing campaigns convinced the largest retailers in the country to pull the offending products. Consider the example of Mrs. Estrellita Capo of St. Augustine, Florida, who had sent a letter of complaint to A&P’s corporate headquarters. Deluged by similar letters, A&P ordered its reluctant local store manager to go to Mrs. Capo’s house to apologize in person. As she later confided to her favorite broadcaster, “I can’t tell you how happy it made me feel.” If you want to create an army of activist foot soldiers, giving them that kind of sense of empowerment is a good first step.

The boycott’s success was a black eye for the Kennedy administration. Congress revoked Most Favored Nation trade status for several of the countries that the President had extended it to. Kennedy would not forget the sting of that rebuke. During the summer of 1963, he asked his aide Myer Feldman to draw up a memorandum outlining threats to his re-election hopes; at the top of the list were conservative broadcasters, because of their ability to energize anti-administration grassroots activism. Feldman worried that the Radio Right had empowered “local right-wing organizations scattered around the country that harass local school, local librarians, and local government bodies,” specifically naming the “card party movement” as an example of this “formidable force in American life today.”

President Kennedy and Myer Feldman were also caught on an Oval Office recorder discussing their plans to combat the Radio Right. However, the ultimate origin of the plan was a document produced two years earlier by the administration’s labor union allies. At the request of the administration Walter and Victor Reuther, heads of the United Auto Workers, produced a strategy for defanging conservative radio. Their plan, nicknamed the “Reuther Memorandum,” had two key prongs, the first of which was to stem the flow of donations to broadcasters through targeted Internal Revenue Service audits. Even temporarily removing broadcasters’ tax exempt status would hurt their ability to raise the money they needed to purchase airtime.

Second, the Reuthers recommended using the Federal Communications Commission to pressure radio station owners. The FCC had a set of rules known as the “Fairness Doctrine,” which had been created a few years previously to encourage station owners to air multiple points of view on any given issue of public importance, including on current events and political questions. If a station aired a conservative broadcaster’s attack on, say, Kennedy’s proposed Nuclear Test Ban Treaty in the summer of 1963, then proponents of the treaty could demand free response time. Doing so would create a burden on station owners, who might be reluctant to air conservative programming at all in the future.

You can find the full story of how the Kennedy administration implemented the Reuther Memorandum’s recommendations in my book, but suffice it to say here that the counter-Radio Right campaign was an astonishing success. The administration went on to create a series of front organizations to launder cash from allied interest groups and to create the facade of public support for silencing Right-wing radio. They leveraged the threat of lodging Fairness Doctrine complaints against recalcitrant radio stations into free airtime for pro-administration voices. And even after Kennedy’s assassination, the effort continued under the auspices of the Democratic National Committee, the US Senate Commerce Committee, and, later, the National Council of Churches.

By the late 1960s, radio stations had begun dropping conservative programming en masse. For example, Carl McIntire’s radio show had aired on at least 475 stations in 1964 but was reduced to 183 stations by 1967. It would not be until after the Carter administration relaxed enforcement of the Fairness Doctrine in the late-1970s (followed by its formal repeal under the Reagan administration) that the Radio Right would re-emerge as a significant force in national politics.

President Trump’s expressed desire to revoke broadcast licenses of his critics is an echo of Kennedy’s use of the Fairness Doctrine. But unlike Kennedy (and later Nixon), Trump cannot simply compel broadcast news outlets to treat him in a manner he deems “fair” under threat of adverse regulatory scrutiny. Then again, the Trump administration has expressed an interest in creating a new commission dedicated to combating algorithmic discrimination against conservatives on social media. It may be a new media form, but it’s an old media problem. Rules to promote “fairness” or prevent “discrimination” can all too easily turn into tools for gaining partisan advantage at the expense of free speech, a free press, and a functioning democracy.