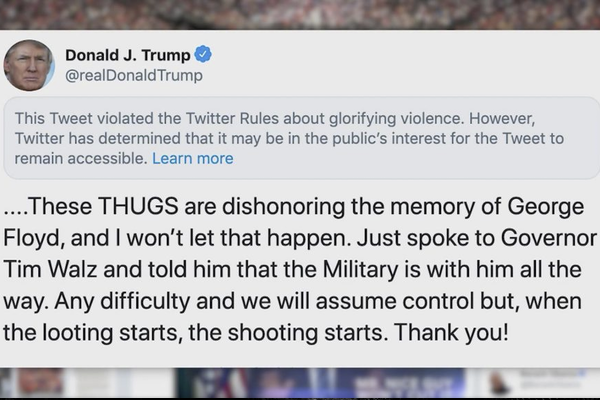 Police brutality did not start with Derek Chauvin, and it probably will not end with him either. Give a man a gun, and the temptation to abuse his power is always there.

In the 1960s, my mother was the principal of a vocational high school in mid-town Manhattan. An obviously deranged homeless man wielding a screwdriver entered the school’s gym, and began shouting obscenities at the students. The man happened to be black. The school called the police, and a white motorcycle cop was first on the scene. Without any warning or conversation, the cop shot the man dead in front of 100 students. The cop’s defense, backed by the police union, which got him lawyered up, was that he felt threatened by the screwdriver. The NYPD disciplined the cop. He got a slap on the wrist, something like forfeiting eight vacation days.

The shot that killed the vagrant was hardly heard around the world. There were no cries of “black lives matter” in those days. It was the Viet Nam era. No one called for defunding or demilitarizing the police, as they do now. There were no demonstrations. Only the sobering realization that human life is cheap and expendable.

Indeed, it wasn’t until 1993, that New York after decades of false starts, instituted a Civilian Complaint Review Board, an independent oversight agency to review cases of police brutality and recommend appropriate discipline.

This time it is different. Much has happened since the 1960s, but the racial divide that existed from the founding of the country is still too much with us.

Earlier in our history, we had presidents who sought to bring us together and heal wounds “with malice toward none, and charity for all.” Lincoln presciently understood the hypocrisy of slavery and its stain on American values. In the Lincoln-Douglas debates of 1854, he argued:

I hate it [slavery] because it deprives our republican example of its just influence in the world-enables the enemies of free institutions, with plausibility, to taunt us as hypocrites-causes the real friends of freedom to doubt our sincerity, and especially because it forces so many really good men among ourselves into an open war with the very fundamental principles of civil liberty... and insisting that there is no right principle of action but self-interest.

We took another swing at it in the 1960s when we all thought that the Civil Rights movement would bring change. In March 1965, President Lyndon Johnson went before a joint session of Congress, and embraced the cause of the protesters, pleading for the “dignity of man and the destiny of democracy.” Johnson movingly spoke of American values: “Our mission is at once the oldest and most basic of this country: to right wrong, to do justice, to serve man.” He declared that the effort of American negroes to secure for themselves the full blessings of American life” “must be our cause too…[I]t’s not just Negroes, but really it’s all of us, who must overcome the crippling legacy of bigotry and injustice. And we shall overcome!”

Today, we see massive protests around the world. The murder of George Floyd on a Minneapolis street has captured the global conscience. Thousands of protestors in Asia, Europe and Australia across six continents joined the protestors in New York, Los Angeles Washington and Philadelphia to decry racism and injustice.

The stakes have never been higher for the United States. As did Lincoln a century and a half ago, Council on Foreign Relations President Richard Haass argues in an important Foreign Affairs piece that

Unless the United States is able to come together to address its persistent societal and political divides, global prospects for democracy may weaken, while friends and allies of the United States may rethink their decision to place their security in American hands, and competitors may dispense with some or all of their traditional caution.”

We wonder why the flames of protest engaged today’s sensibility, and not before. Nobody marched on six continents in 2014 after Eric Garner was filmed being garroted by officers on Staten Island—indeed, hardly anyone marched in New York, either.

The protests will eventually end, and it is unknown at this point what reforms will come of them. But have we really learned anything from the tragic murder of George Floyd? The Senate, 65 years after the lynching of Emmett Till, dithers over a bill that defines lynching on the basis of race a federal hate crime. Since Floyd’s death, prosecutors in Buffalo, New York announced felony assault charges against two cops who, without any provocation, shoved a 75-year-old protester to the ground. The elderly man remains in a serious condition in hospital after hitting his head in the fall. Fifty-seven of the officers’ colleagues resigned in solidarity, and Trump defends the police spouting a far- fetched conspiracy theory. Solidarity with what? Criminal conduct?

The times present a unique political and historical opportunity for the President of the United States to embrace the cause of his countrymen and try to heal the wounds. Rather than speak from his “bully pulpit” in which he, like Lincoln and Johnson, identifies with the protesters, we have a rogue president in office. Trump threatens to unleash vicious dogs on those who breach his security perimeter; repeats the trope of the Nixon era that “when the looting starts, the shooting starts;” uses tear gas and rubber bullets to make an unprovoked attack on American citizens exercising their constitutional right of lawful assembly, so he can have a photo-op in front of a church he rarely, if ever, attends; invokes the Insurrection Act to threaten using the United States Army against citizens exercising their constitutional right of free assembly, while one of his favorite senators, Tom Cotton of Arkansas, a combat veteran, issues the clarion call to “send in the troops;” and states that proposed legislation removing a “qualified immunity” for police officers is a non-starter. The doctrine of qualified immunityshields police officers, from civil liability for conduct on the job unless they violate "clearly established" constitutional rights.

Undeniably, we have a president spewing nonsense in a political climate of “truth decay.” He continues to add to the tally of 18,000 lies the Washington Post totes up he has uttered since attaining the nation’s highest office.

I am a lawyer, not a metallurgist, but it is remarkable that throughout his dark career, nothing seems to stick our Teflon president. But, as his approval ratings continue to descend in the polls, Americans are increasingly disgusted with this “great divider.” Perhaps now with the murder of George Floyd, the American people have come to realize that he is more sinning than sinned against.