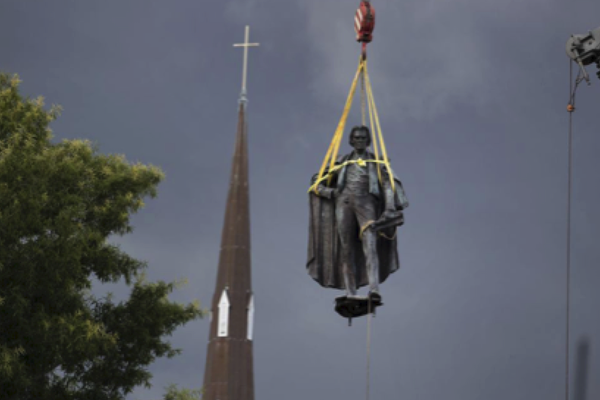 On June 24 the City of Charleston, South Carolina removed a giant statue of the 19th century pro-slavery leader John C. Calhoun that had dominated the historic downtown for more than a century.

City officials had previously resisted dismantling the giant statue, even after the 2015 tragedy when nine members of the city’s Emanuel African Methodist Episcopal Church were shot to death by white supremacist Dylann Roof.

Professor Ethan Kytle is co-author, with Blain Roberts, of Demark Vesey’s Garden: Slavery and Memory in the Cradle of the Confederacy, which detailed the role of the many statues honoring the Confederacy in Charleston. He is also the author of Romantic Reformers and the Antislavery Struggle in the Civil War Era and is the professor of history at California State University, Fresno.

Q. Professor Kytle, give us a brief background on the Calhoun statue. Why is it so tall (110-feet)?

The Calhoun statue that was recently removed was installed in 1896. As my co-author, Blain Roberts, and I document in our book, Denmark Vesey’s Garden, this statue is Charleston’s second monument to the proslavery politician. The Ladies’ Calhoun Monument Association (LCMA) erected the first one in 1887. But the group took that monument down eight years later, citing aesthetic shortcomings. We have every reason to believe, however, that black Charlestonians’ ridicule and vandalism of the original Calhoun monument also played a role in the decision to take it down.

One explanation for the remarkable height of the second Calhoun monument, then, is that the LCMA wanted to protect it from the sort of defacement that the first monument suffered. Yet despite the second statue’s lofty perch, African Americans and other critics of Calhoun repeatedly vandalized the base.

Q. Why has the Calhoun monument lasted so long when other cities have removed many Confederate statues?

In recent years, the chief barrier to removing the Calhoun Monument was thought to be South Carolina’s Heritage Act, passed in 2000, which protects war monuments as well as memorials on public land. But Charleston’s legal team ultimately determined that this state law does not apply to the Calhoun statue, which, after all, is not a war monument [Calhoun died in 1850, though his pro-slavery politics and articulation of the doctrine of nullification were crucial to the Confederate project—ed.] and sits on private land that is leased to the city.

More generally, however, I am not sure that it is accurate to say that the second Calhoun monument lasted much longer than other Confederate and white supremacist statues. It stood for over one hundred years, but so have many Confederate memorials, most of which were also put up in the late nineteenth and early twentieth centuries—as conservative white southerners crafted their segregationist culture.

According to University of Alabama historian Hilary Green’s new project, which maps the removal of Confederate monuments and memorials, only a handful of these tributes were taken down before 2015.

But things changed decisively that summer following the Mother Emanuel Church massacre, which took place just one block from the Calhoun monument. This tragedy proved to be a watershed in America’s long debate about the place of Confederate symbols in our commemorative landscape.

African Americans have critiqued and vandalized Confederate memorials for generations. It was only after the murder of the Emanuel Nine by a Confederate-flag waving white supremacist, however, that much of the rest of the country began to listen to them and to see the flag and Confederate monuments as the symbols of hate and oppression that they are.

The Emanuel massacre, in other words, unleased a public, African American-led campaign against Confederate symbols that is transforming our country for the better. Since then dozens of Confederate flags, monuments, plaques, and other white supremacist memorials, including the second Calhoun monument, have been removed across the country and beyond.

Q. In recent weeks, dozens of Confederate statues have been removed, either officially or by protestors. What should take their place? Should we erect statues of African American leaders? Can you point to a successful replacement?

First off, I don’t think it is fair for a scholar like me to tell a community what sort of monuments it should put up. This should be a local decision—and one that takes into account the perspectives of the entire community, which was not the case with Confederate monuments.

But I certainly support the installation of statues of African American leaders as well as leaders of other underrepresented groups, including Native Americans, Asian Americans, Latinos, women, and others. And I would like to see more public memorials highlighting our nation’s history of discrimination based on race, gender, and sexual orientation as well. It is worth noting that this process has already begun in Charleston where a number of statues honoring African-American leaders have been erected in the past decade.

Q. You have written extensively about the history of the antislavery struggle. What is different about the recent protests?

One difference is that 19th century antislavery activists didn’t spend time working to remove white supremacist monuments because the United States landscape was not yet filled with them.

But abolitionists did target other symbols of racial oppression. In 1854, for instance, William Lloyd Garrison dramatically burned copies of the Fugitive Slave Law and the Constitution at a Fourth of July rally.

On a broader level, I would emphasize the similarities rather than the differences between today’s protestors and pioneering abolitionists such as Garrison, Harriet Tubman, and Frederick Douglass. Both groups targeted systemic racism and both faced off against local, state, and national authorities that were complicit in this injustice.

Q. You teach college students at a major public university. How much do they understand about slavery and its legacy? How could we improve teaching about slavery in the K-12 grades? For example, California, state history is taught in the 4th grade; should that include a discussion of slavery?

At Fresno State, I teach classes on the history of slavery, the Civil War, and Reconstruction. Most of my students are fascinated by these topics and tell me that they are only addressed in passing at the K-12 level.

Since many of our history majors end up as social studies teachers themselves, I often ask them how they would teach these topics differently. We talk, for example, about whether it is appropriate to expose young students—say, 4th graders—to the brutalities of slavery. Nearly all of them agree that we shouldn’t sugarcoat our past in the classroom, even for our youngest students. Fortunately, organizations such as the Southern Poverty Law Center have started highlighting this shortcoming in our history curriculum and producing materials the help K-12 teachers redress it.