The Battle of The Atlantic has Lessons for Fighting COVID-19

Marc Wortman is the author most recently of 1941: Fighting the Shadow War: A Divided America in a World at War. 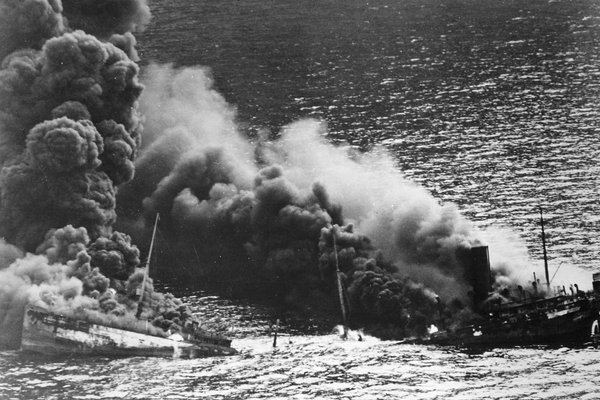 Dixie Arrow after being torpedoed off Cape Hatteras, March 1942

Tom Hanks's “Greyhound,” the historically accurate film about a World War Two convoy under attack from German U-boats, depicts the harrowing early years of the war when merchant shipping faced near-constant threat of attack. The attacks took place in the mid-North Atlantic where, until later years of the war, air coverage could not protect the ships. But in the very first months of the war, the U-boats converged on shipping within sight of the United States’ coastline. The bungled response to the U-boats lurking off the Eastern seaboard offers some surprising lessons for responding to the current pandemic.

With Germany’s December 11, 1941 declaration of war on the United States, Hitler’s navy launched what was known as Operation Paukenschlag, or Drumbeat, the cross-Atlantic attack on shipping plying the Eastern seaboard lanes. Five long-range U-boats departed in the third week of December from their pens in occupied France. They reached within just miles of the Eastern seaboard early in January 1942.

What they saw shocked and delighted them. It was the start of what the U-boat sailors called the “Second Happy Time,” after an earlier period of great success against Allied shipping.

Lighthouses flickered, headlights beamed, signs glowed, and household and business windows illuminated the night. Arriving off New York City, “I found a coast that was brightly lit,” one U-boat captain recalled. “At Coney Island, there was a huge Ferris wheel and roundabouts —could see it all. Ships were sailing with navigation lights. All the light ships, Sandy Hook and the Ambrose lights, were shining brightly. To me this was incomprehensible.”

Other Germans arriving along the East Coast shared his astonishment. They had traveled from blacked out Europe. But surfacing off American cities and resort towns from Portland, Maine, to Miami, observed another U-boat officer, “we could distinguish equally the big hotels and the cheap dives, and read the flickering neon signs…. Before this sea of light… we were passing the silhouettes of ships recognizable in every detail and sharp as the outlines in a sales catalogue…. All we had to do was press the button.”

It was a turkey shoot. Those first five U-boats bagged 23 ships within days. The German navy couldn’t afford to dispatch more than a dozen U-boats at a time to the happy hunting ground that spring. But with so many targets silhouetted against the lights glaring out from 1,500 miles of coastline, they wasted no torpedoes. Three ships on average went to the bottom every day that spring.

From the Canadian to the Caribbean waters, those scant few U-boats on patrol at any one time a total of sunk more than 360 merchant ships and tankers--about 2,250,000 gross tons--in the first half of 1942. An estimated 5,000 lives, mostly merchant seamen, were lost.

Americans on shore and passengers on flights gaped at the horrifying spectacle of ships exploding and sinking. Vacationers watched tankers burn to the waterline and found debris and bodies washed up on shore. With oil and food supplies suddenly lost in vast quantities, rationing began.

But those same tourists and beach goers shared some of the blame for the carnage and economic toll. The resort towns and other coastal sites where they flocked refused to dim the hotel, restaurant, shop, boardwalk and carnival lights. They were beacons that drew people—customers—from far and wide.

And they nearly lost the nation World War Two.

“One of the most reprehensible failures on our part was the neglect of the local communities to dim their waterfront lights, or of military authorities to require them to do so, until three months after the submarine offensive started. When this obvious defense measure was first proposed, squawks went up all the way from Atlantic City to southern Florida that the ‘tourist season would be ruined.’ Miami and its luxurious suburbs threw up six miles of neon-light glow, against which the southbound shipping that hugged the reefs to avoid the Gulf Stream was silhouetted. Ships were sunk and seamen drowned in order that the citizenry might enjoy business and pleasure as usual.”

The U.S. government also shared in the blame. Fearing a demoralized public in the early months of what was sure to be a long and costly war, federal authorities blocked reports about the catastrophic shipping losses and the Navy’s inability to stop the U-boat onslaught. People didn't realize that they could help stop the carnage.

Sound familiar? Instead of refusing to turn out the lights, Americans today are in large numbers refusing to mask and social distance. Many share those earlier Americans’ disbelief in the early months of the war that their actions harmed the country and put their fellow citizens at grave risk. Businesses now, like then, worry about losing customers. Unwilling to undermine the economy, some state and federal officials have blocked public access to infection data and deny the gravity of the public health risk.

Like the global war in early 1942, we are just in the first months of the coronavirus pandemic. But in late spring of 1942, American authorities finally wised up to the need to come to grips with the U-boat onslaught.

With reluctance from some quarters, headlights and windows were masked, hotels darkened their signs, lighthouses dimmed their beacons, businesses shut off the lights at dusk. Penalties were enforced against those who refused to turn their lights off.

The benefits came quickly. The U-boats were deprived of their silhouetted sitting ducks. Coastal shipping losses dropped immediately, back to 23 that month. The “curve” of sinkings flattened. Convoys with naval escorts such as depicted in “Greyhound” further reduced losses until, in July, there would be only three sinkings, and then none inside U.S. coastal waters for the rest of the year.

As officials and individuals consider their responsibility for halting the coronavirus outbreak, we would do well to recall this earlier failure to act to defeat a common enemy. We should learn from the past and act promptly and decisively to enforce masking before the coronavirus sinks the nation.