William L. Barney has taught and written on U.S. history at UNC at Chapel Hill since 1975. He is the author of numerous books on the Civil War Era and Southern secession. His most recent work, to be released in August by Oxford University Press, is Rebels in the Making: The Secession Crisis and the Birth of the Confederacy. 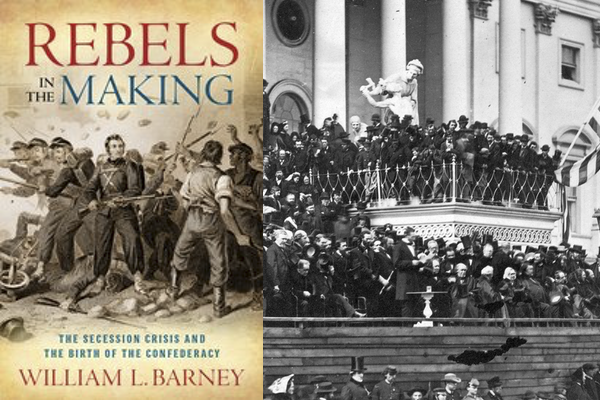 In the spring of 1861, the United States was on the verge of becoming a failed state. All that was needed was Lincoln’s recognition of the existence of the Confederacy. In writing a history of how a strategically placed minority of slaveholders maneuvered eleven states out of the Union and created the short-lived Confederate States of America, I gave little thought to the possibility that my America might soon find itself on the brink of a comparable crisis of governance and national purpose.

Yet, here we are. The nation is staggering from the shattering effects of the Coronavirus pandemic and its response is among the worst in the world. As mass protests on behalf of racial justice rock the nation’s cities, the president and federal law enforcement agencies respond with a show of brutal force that frightfully resembles the strong-arm tactics of Nazi Brownshirts in the 1930s. As unemployment soars to depression-era levels, the toxic partisanship in Congress stymies any consistent policy of national aid and relief. In retrospect, the combination of malevolence and paralysis that has characterized our national leadership should come as no surprise. Beginning in the late 1970s and accelerating after 9/11, the means of effective governance have been systematically undermined by tax cuts that further enrich the few at the expense of the many, deregulatory policies that give free rein to corporations regardless of the consequences to the environment or the public good, and the privatization of healthcare, prisons, education, infrastructure, pensions, low-income housing, and social services. Only a free market economy directed by individuals pursuing their own self-interest unfettered by government interference can be trusted, we’ve been told, with producing the greatest good for the greatest number. The result has been an economy hobbled for decades by deindustrialization, dead-end jobs in the midst of endemic underemployment, rising levels of linked racial and economic inequality, and smoldering alienation and resentment by those who once knew or dared to hope for better.

Lincoln met the crisis of secession by demonstrating that the United States indeed had a government whose claims to national sovereignty received broad public support. Working hand in hand with Congress and with support from pro-war Democrats, Lincoln oversaw a restructuring of the federal government to meet the demands of the war. In a burst of path-breaking legislation unmatched until the New Deal, Congress created the first national currency, fashioned a new backing system around nationally chartered banks, imposed the first national taxes on individual incomes and businesses, provided for land grant universities to advance agricultural education, and made good on homestead legislation. Federal expenditures exceeded all the costs of running the government since its inception in 1789 down to the outbreak of the Civil War. Business interests certainly received their share of federal subsidies and then some, but the reform program of the Republicans was broad and generous enough to garner the support of the party’s core constituencies. More significantly, the Republicans’ campaign for emancipation, however belated, set the stage for a commitment to racial equality written into the Constitution that would have been unthinkable before the Civil War.

As Lincoln recognized, the Union’s cause was the cause of Western liberalism. Carried forward by a new middle class and workers seeking basic democratic rights of suffrage and political participation, liberalizing currents swept Europe into the revolutions of 1848 against the hierarchical old order of the landed aristocracy. Though suppressed, the revolutionaries held fast to their liberal agenda. This was the international context of rising liberalism the Confederacy sought to reverse with its bid for a reactionary slaveholding republic ruled by a landed elite. Its defeat in the Civil War was a setback for conservative regimes in Europe intent on further repression at home and the imposition of new imperial regimes in the Americas, such as Emperor Napoleon III’s designs on Mexico and Spain’s on Sainte-Dominque.

The challenge facing democratic governments today is even more daunting than that confronted by Lincoln. To date, tightly regulated, centralized regimes in the East led by China, Singapore, and Vietnam have been far more successful in dealing with the Coronavirus crisis and in providing social programs insulating their populations from the worst effects of the crisis. More open nations in the East like Japan, Taiwan, and South Korea have also coped relatively well with the assistance of mandatory controls on individual behavior and programs of public education and health services.  Lagging far behind are the flagships nations of Western liberalism and individualism, the United States and the United Kingdom.  In the increasingly contentious battle for global leadership between China and the United States, China’s model, for all its repressive features, is pulling ahead as a governing system for other nations to follow.

At risk is the very survival of democratic governance and free market capitalism as the exemplar of how progress and human rights are to be achieved, a legacy already weakened by the rise of authoritarian populism. Much more is needed than pouring money into the struggle to maintain or regain military, technological, and economic superiority and to throw a lifeline to the most disadvantaged. Such measures will be at best stop gap palliatives without a fundamental redefinition of just what constitutes national security and a reckoning with the poisonous legacies of slavery, systemic racism, and grotesque levels of wealth inequality. The United States is at a crossroads. One path leads to closed borders, bludgeoning protesters, and repeating the same policies of the past that have worsened the problems of today. The other leads to major cultural and economic shifts brought about by a fundamental re-examination of who we are as a people and what legitimate demands for social and economic justice we have a right as citizens to make on our government. The path chosen will determine whether contemporary America resumes its role as a beacon of hope and progress to the rest of the world or joins the Confederate slaveholders of the past among history’s losers.