Peter N. Stearns is University Professor of History at George Mason University and once served as American Historical Association Vice President for Teaching. He has written widely in world and social history, with a recent book on Time in World History (Routledge); he also teaches undergraduates in both areas. Long active in the field of history of emotion he is currently working, Condorcet-like, on a book on Happiness in World History. His latest book, co-authored with Marcus Collins, is Why Study History? (July 2020). 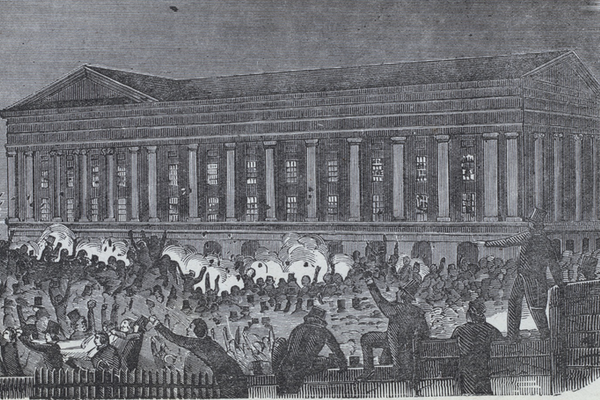 History and historians are certainly close to the front lines of a host of issues in the crises that currently beset us, in the United States and globally. How we handle and convey the past has emerged as a central issue in the protests that surround us, opening all sort of complex issues to new debate.

One angle that has not received due attention involves what history tells us about crowd behavior, and how this in turn might provide useful perspectives on current tensions.

Crowd history was one of the staples of the “new” social history that emerged in the US and the UK in the 1950s and 1960s, ultimately gaining further interest during the turbulence of the latter decade. Historical findings were carefully incorporated in the late 60s report on “Violence in America.” Since then, however, the subject has languished a bit, displaced by more fashionable concerns about culture and gender; but it may be time to renew our interest, among other things asking how more recent developments – both in contemporary history and in historical study – can amplify earlier findings.

One of the central themes of the earlier studies involved a careful attack on the common conservative argument (originating with Gustav Le Bon) that crowds – “mobs”—are simply violently irrational and that, as a result, their demands do not warrant serious consideration. On the contrary, pioneering social historians like George Rudé showed that crowds develop internal leadership, that their actions are quite selective based on group goals, and that random violence (and particularly, personal violence) is not a significant factor.

These findings deserve reemphasis, and appropriate additional documentation, today. Crowds have frequently played a very constructive historical role. Their normally controlled behaviors have been abundantly illustrated in recent weeks, even though the press pays primary attention to occasional instances of property damage. Historian Dolores Janiewski (Victoria University Wellington) has noted how even the New York Times falls into a classic trap of using the term “mob,” rather than more neutral descriptors, with surprising frequency.  Historical summaries, including of course the recollections of the civil rights protests that have been appropriately recalled as part of the homage to John Lewis, can help rescue crowds from editorial distortion.

Historical work can also remind us of the police variable. Here too, there are some classic components. Police accounts almost always seek to minimize the size of crowds and attempt to call attention to the role of real or imagined “outside agitators” in an effort to disparage a crowd’s responsible goals. But outright use of force by police is itself a variable affecting crowds’ behavior, and renewed historical work can remind us of the effects when authorities have chosen different available options. The same applies to the common conservative strategy of trying to use and distort crowd behaviors to instill fear to justify more repression.

Renewed historical attention to crowds must of course take into account a number of developments not relevant to the situations (largely late 18th to late 19th centuries) on which initial generalizations were based. Changes in the arsenals available to the “forces of order” have clearly introduced new elements into crowd behavior (and so, to a more limited degree, have mechanisms available to crowds themselves, including most recently items like leaf blowers used to disperse tear gas). The rapidity of social media communications would clearly need attention, though in the old days rumors could also spread surprisingly quickly. The advent of formal thinking about nonviolence needs appropriate note, as well as a wider range of examples of crowd behavior in regions beyond the West. How much all of this would alter the existing basic profile is not clear, but a number of updates clearly warrant examination.

Many historians would also argue that a more explicit emotional component needs to be added to relevant crowd history. Arguably, the earlier generalizations went too far in downplaying the emotional elements of crowd behavior. (Emotion and rational action are not, after all, necessarily in conflict.) Emotion – most obviously anger, sometimes fear or hope – is an essential element in binding a crowd together, motivating it to take risks and step out of normal routine.

Here too, words matter. Terms like “rage” (another part of the NYT’s recent vocabulary) risk reinforcing the idea of the mindless mob, compared to the more neutral “anger” or an older word I would like to see revived, “indignation” (anger itself is sometimes currently viewed as a “negative” emotion, but the history of crowds reminds us that it need not be so).  There is much to do to integrate emotion into an appropriately balanced assessment of crowd motivation and behavior.

But emotion also contributes to certain aspects of crowd behavior that deserve further analysis, again in light of recent developments. Most importantly, emotion may promote an interest in immediate, tangible targets, a clear feature of the crowds we see around us today, with their intriguing fascination with statues and other physical symbols of injustice. The question of the durability of crowd emotion is another vital topic. Can the emotions that bring people into the streets be sustained over a long period of time, and how is this best achieved?

Finally, the relationship between crowd action and other protest mechanisms – petitioning, boycotting, and crucial to the present day, voting – also warrants attention. Earlier findings on crowd history – and the work of Charles Tilly was central here – emphasized a distinction between “reactive” protest, against a real or imagined deterioration in relevant conditions, where direct action might be particularly effective; and proactive goals, the demand for new rights, where crowd pressures might need to be supplemented for some chance of positive results. The reactive-proactive balance offers another standard that can potentially be applied to the role of crowds in renewed struggles for racial justice, and the need to combine crowd action with other political tactics.

As we face new and legitimate demands on history and historians to help navigate the current moment, the opportunity to revive and widen the study of crowds and protest deserve a clear place on the agenda, particularly given the opportunity to combine earlier findings with the rich recent developments in the history of emotion. Here, it seems to me, may be one way not only to provide perspective on the present, but also to encourage constructive results from the passions that are again motivating people to protest and put themselves at risk in the name of justice.   At the least, the subject invites renewed professional debate.