ROBERTO LOVATO is an educator, journalist and writer based at The Writers Grotto in San Francisco, California. He is the author of Unforgetting: A Memoir of Family, Migration, Gangs and Revolution in the Americas (Harper Collins). Lovato is also a Co-Founder of #DignidadLiteraria, the movement advocating for equity and literary justice for the more than 60 million Latinx persons left off of bookshelves in the United States and out of the national dialogue. A recipient of a reporting grant from the Pulitzer Center, Lovato has reported on numerous issues—violence, terrorism, the drug war and the refugee crisis—from Mexico, Venezuela, El Salvador, Dominican Republic, Haiti, France and the United States, among other countries. 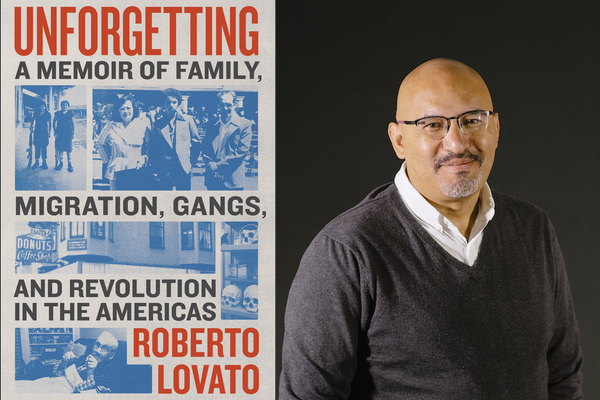 As I listen to President Trump speechify about how he is launching “an all-out-campaign to destroy MS-13,” the Salvadoran gang whose members (maras) I’ve known for over 30 years, the first thing I think is “it must be election season.” The second thing I think about is history, specifically, a historical figure whose contributions to creating the “gang threat” have had and are still having catastrophic consequences: Attorney General William Barr. More than anyone in U.S. history, Barr perfected the Salvadoran gang formula—mixing elections, gangs, immigration and policy—he’s been developing for decades, since the L.A. riots of 1992.

Trump ‘s Oval Office speeches and other recent MS-13 rants come on the heels of many previous pronouncements, like his 2019 midterm statement referring to the Speaker of the House as “the MS-13 lover Nancy Pelosi."

While Trump’s deploying MS-13 as an election year prop is predictable and laughable in how it (again) tries to paint the gangs as “terrorists,” these electioneering ploys hide a history of policing and intervention that created in Los Angeles, and exported to Central America, both the gangs and the policing models many are now calling on the country to abolish. Few people have worsened the devastation in Central America and the humanitarian crisis of refugees fleeing the region as much as William Barr. In attacking the maras, Trump is continuing a pattern of lies backed materially by policy and police and military boots on the ground.

I first noticed Barr’s outsized role while watching him commenting on Face the Nation right after the L.A. riots of 1992. As Barr started talking about “the significant involvement of gang members at the inception of the violence (of the riots),” it was obvious that he was laying responsibility for a billion dollars of destruction on the maras and other gangs, even though those of us who were actually on the streets knew it was the country’s first multiracial uprising. In order to understand the killings of George Floyd, Breonna Taylor and other cases that moved Black Lives Matter back into action in cities across the U.S., we must understand what William Barr did in those cities to Salvadoran and other gangs following the L.A. riots.

Those of us working in the central parts of L.A. most impacted by the riots—the South Central  and Pico-Union neighborhoods— understood Barr’s Face the Nation statements for what they were: a cynical use of the uprisings and the gangs to justify a major shift in US law enforcement. This a shift that would have profound implications for Salvadorans in the Pico-Union neighborhood where the Salvadoran maras were born. At the time, however, few to none of us in South Central and Pico-Union had any idea that Barr’s policy and policing maneuvers previewed a shift in U.S. law enforcement that would have the catastrophic results far beyond the communities that burned to the ground.

Barr was using the complexity and chaos of post-uprising L.A. as an opportunity to push his new priority for federal law enforcement: fighting gangs, especially the maras. Weeks after his appointment to the G.H.W. Bush administration, the new attorney general had targeted the gangs with the largest reallocation of FBI resources in history, moving three hundred agents from counterintelligence work against potential foreign enemies to instead target the gangs, including the Salvadoran young people in and around maras. Before making his decision to prioritize gangs, Barr consulted with the man who started a new era of anti-immigrant politics in the United States, California governor Pete Wilson, who was preparing to launch Proposition 187. Proposition 187, which denied government aid and services to undocumented immigrants, was the de facto start of the contemporary anti-immigration movement in the United States.

Barr went on to send US Justice Department trainers and aid to El Salvador to institute policing models based on William Bratton’s “broken windows” policing in New York, championed and expanded by Rudy Giuliani. These were the same controversial policing models that #BlackLivesMatter protests throughout the country are calling on governments to abolish. Barr’s failed policies are global in scope—and still growing. Even before Trump’s attempts to designate the estimated 10,000 mara members in the U.S. as “terrorists,” other U.S. presidents and government officials, FBI agents, and U.S. allies that have made baseless claims comparing the maras with Al Qaeda and other terrorist organizations. The haze of Barr’s racialized war on gangs is enhanced by my peers in the media, many of whom still use tattoo-faced images of the maras, even though most stopped tattooing their faces many years ago.

Lost in the haze of Barr’s legacy is the fact that the overwhelming majority of the estimated 10,000 mara members in the U.S. (a number that has not grown for years, according to the FBI) have not killed anyone. In any given year, three or four handfuls of white men involved in mass shootings with AR-15s have likely killed more people in the than have all MS-13 members living in the United States.

The most recent testament to Willaim Barr’s legacy lives in Trump’s Oval Office Salvadoran gang statements yesterday. Those statements included linking Democratic mayors to the maras, calling the mayors "left wing people that are running our cities,” and “not doing the job that they’re supposed to be doing (about the gangs)”

All indicators are that Barr’s legacy will continue and expand their destructive trajectory. Trump said that Barr himself would be holding a press conference next week announcing policy initiatives targeting MS-13.

The other thing I hear in Trump’s MS-13 speeches is that in L.A. across the United States and around the world, we’re all living in William Barr’s vision of gangs, cities and politics.