Richard Kreitner is a writer for The Nation and the author of BREAK IT UP: Secession, Division, and the Secret History of America’s Imperfect Union (2020). 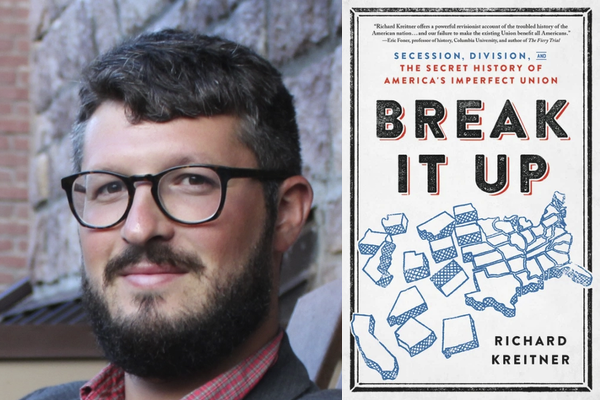 Is the United States on the brink of a second civil war? The question has hovered around the margins of national political discussion for three or four years now, gaining new purchase with every crescendo of a hard-fought election, every fresh outbreak of disorder, every highly publicized evisceration of a long-cherished, now-eroded norm.

Yet this year of unprecedented upheaval--a presidential impeachment trial, a deadly pandemic, a precipitous economic crisis, a succession of carbon-fueled catastrophes--has seen the possibility raised of a violent eruption of civic discord on a scale unseen in this country for more than a century and a half. The roots of the second civil war, should it come, lie deep in American history, as far back as the founding, if not before. But the end of the first one also offers answers as to why it failed to resolve the underlying conflicts and contradictions in American political life. Even within months of Appomattox, the traumatized inhabitants of a battered and broken land were asking themselves if the cycle of violence would ever end, if the questions that led to the conflict might, sooner or later, start a new one.

Rumors and reports of another looming conflict began circulating immediately after Appomattox. Given that the country had just torn itself apart, it wasn’t hard to imagine the worst happening once again. President Andrew Johnson, a lifelong Democrat who took over in April 1865 for the assassinated Lincoln, sympathized with the former slave owners and wished to welcome the former Confederate states back into the Union with no strings attached. To Benjamin Butler, the Union general who had first offered protection for war-time fugitive slaves behind army lines and thus played a crucial in advancing military-backed emancipation, such a generous Reconstruction would effectively amount to a surrender to the South. “All is wrong,” Butler wrote. “We are losing the just results of this four years struggle.”

To Republicans in the North, those too-hasty steps toward Reconstruction would risk surrendering the whole purpose of the war. Would it be necessary once again to resort to arms? “The First Southern War may prove not the last,” the diarist George Templeton Strong wrote in his diary in 1866. He feared that “there may well be another sectional war within three years.” “We are to have another war,” lamented William Brownlow, a longtime foe of Andrew Johnson in Tennessee politics. Johnson, in that next fight, would “take the place of Jeff Davis,” Brownlow anticipated.

To Johnson and his opponents, excluding the Southern states from the Union was as good as to invite another cataclysmic clash. Johnson railed against his opponents as “Radical Distructionists” and accused Republicans, by excluding the Southern delegations from Congress, of engaging in “secession in another form.” Democratic papers warned that “Black Republicans plunged the country into one civil war” and would gladly do so again. Every day Congress met without newly-elected Southern representatives--among whom were numerous veterans of the Confederate army and government--was “a triumph of treason,” one newspaper argued.

In 1867, Republicans seized control of Reconstruction, forced passage of the Fourteenth Amendment extending citizenship to Black Americans, and imposed a military occupation on the defeated Southern states. Democrats were furious, and threatened violent resistance. In letters pouring into the White House, they encouraged Johnson to do whatever it took to force Congress to accept the Southern delegates. Should Johnson try to use the battle-hardened federal army to overcome congressional opposition, one correspondent assured him, thousands of “trained men, of the late Confederate army...will bear the banner of the Union, to sustain the constitution.” These were the same men, of course, who only a few years earlier had vowed to destroy that Union and overthrow the Constitution. One wounded Confederate soldier promised to fight on Johnson’s side in the next war once he had recovered from an injury sustained in the first one.

As in the recent fight over President Trump’s impeachment, the Republicans’ effort to remove Johnson from office in 1868--as Brenda Wineapple recently showed in her absorbing study, The Impeachers--was haunted by the possibility of constitutional breakdown and a return to catastrophic violence. Republican supporters around the country vowed to once again sacrifice “blood and treasure” if Johnson refused to leave office. One even professed himself eager to murder Democrats “as you would wolves.” An estimable New England senator feared the political battle in Washington would lead to “another fight...the final one.”

A politician in Massachusetts wrote to the state’s long-serving senator, Charles Sumner, suggesting Northerners gird themselves for that ultimate fight. “Well, We have been through One War,” he wrote, “But rather than to have treason and traitors triumph, we will fight Again, And Make Clean Work and Sure, if the Cause demands it.”

Johnson’s defenders, meanwhile, offered to rally to his defense. A Washington paper allied with the president described impeachment as a “second rebellion,” and the president himself publicly expressed his faith in the “good sense of the army” should push come to shove.

Ultimately, the country was spared a second war over Johnson’s removal, but that was only because the Senate voted to acquit him by a single vote--a margin likely influenced by the senators’ fear of the widespread talk of violence had the trial ended in his conviction. In that event, one sympathizer wrote to Johnson afterward, the result could only have been “civil war or despotism, or both.”

The president’s acquittal in 1868 telegraphed the decision the Republican Party would eventually make a decade later to withdraw support from military-backed Reconstruction in order to maintain its grip on national political power. The North had fought the Civil War, from the beginning, to preserve the Union, not to free the slaves or to guarantee equal rights for all Americans regardless of color. That difference still held after the war, when Northerners decided it wasn’t worth risking another war to see that the Constitution, as amended after the fighting, was enforced in the South. From that moment, the palpable (and understandable) fear of provoking a second civil war prevented the victorious side in the first one from consolidating its gains and enjoying the fruits of victory. The North won the war, while the South won the peace, the common formulation has it. To undermine the white-supremacist consensus has always been threatening to the myth of national unity, and so it is today.