Ron Faucheux, Ph.D., is a nonpartisan political analyst. He authored The Debate Book and publishes LunchtimePolitics.com newsletter. He has also taught at Georgetown and George Washington Universities. 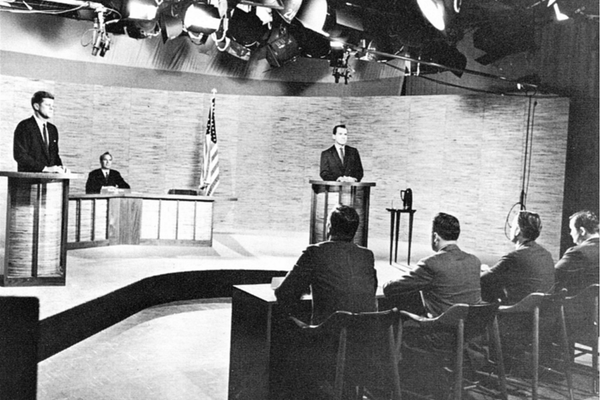 If you think you know what will happen in the coming presidential debates, think again. They’re always unpredictable.

The first Kennedy-Nixon debate in 1960 is a good example.

Most pundits expected Richard Nixon to shine. Not only did he have eight years of experience as vice president, he also had a reputation as a skilled debater. But when the camera blinked on, Nixon seemed pale and weak. John F. Kennedy appeared cool, tanned and in command. Nixon’s one-point polling edge before the debate turned into a three-point lead for Kennedy after the debate. JFK went on to win the election by a hair.

In 2000, observers expected Vice President Al Gore, a capable debater, to wipe the floor with Texas Governor George W. Bush, who was not known for his fluency. But that didn’t happen. In their first showdown, Gore sighed, huffed and puffed, and left a bad impression. His pre-debate lead was wiped out. After all three debates, it was Bush who emerged in first place.

Americans like debates. They offer voters a chance to see candidates side-by-side. They motivate supporters and serve as tiebreakers for undecided voters.

But the effect of a debate can be temporary. In 2012, Mitt Romney delivered a superb performance in the first debate against President Obama, who was surprisingly flat. Romney erased Obama’s lead and opened a path to victory. But, it didn’t last. Obama’s much improved performances in subsequent debates put the incumbent back on top.

Debates are lost, not won. That was apparent in 1976, when President Ford intimated that Eastern Europe was not under Soviet domination. It was a big blunder that played into the negative stereotype of Ford as dimwitted. Jimmy Carter didn’t win that debate, Gerald Ford lost it — and with it the election. Self-inflicted injuries are the worst kind.

Debates can make voters more comfortable with candidates, and lessen doubts. Smart combatants use them to identify with the nation’s zeitgeist.

In the closing days of the 1980 election, Ronald Reagan needed to show he had the substance and stability to be president. When viewed on stage alongside President Carter, the former actor and California governor presented the right contrast: strength versus weakness, change versus status quo. He did it by what he said and how he said it.

Debates have big audiences with gigantic media buildups. They work best for candidates who use them to clarify the choice that voters are about to make. They offer valuable opportunities to sharpen messages and sort out issues that have become jumbled in the fog of campaign warfare. That’s why the question Reagan posed at the end of his debate with Carter—“Are you better off than you were four years ago?”—was so effective.

Let’s remember, too, that a candidate’s principal task is not to win the debate, but to win the election.

In 1996, President Clinton was favored for re-election. He needed to make sure the debates did not alter the dynamics of a race that was going his way, even if it meant pulling punches. While his opponent, Sen. Bob Dole, delivered strong performances, Clinton achieved his objective of protecting his lead — and won the race.

Underdogs, however, need to shake things up. They can do it by unsheathing new issues and attacks.

Looking toward the big event next week—Americans are fixated on whether Joe Biden will falter or stumble. Literally. If he does neither, he wins round one of the expectations game. If the former vice-president stands strong throughout all three debates, he could tighten his grasp on the lead. But, if he’s put on the defensive and seems weak or disoriented, he could do himself serious damage.

Expect Trump to hammer Biden for a range of left-wing policy ideas that have been embraced by Democrats. Expect Biden to go after Trump on the coronavirus and healthcare, emphasizing the current administration’s uncaring and reckless policies.

Trump is full of surprises. In debates, surprise can kill––putting the target, and sometimes the aggressor, at risk. As the underdog in the polls, Trump has less to lose. He needs to change the dynamics of the race. He will likely position himself as the only bulwark against a takeover by the radical left. While the president could throw Biden off track with vicious attacks––on everything from China, tax increases and open borders to son Hunter’s business dealings in the Ukraine––he could also open himself up for tough counterattacks.

Anything goes in this election. And in the upcoming debates, anything can happen. The stakes couldn’t be higher.