Alan Singer is a historian and teacher educator at Hofstra University, Hempstead, NY. 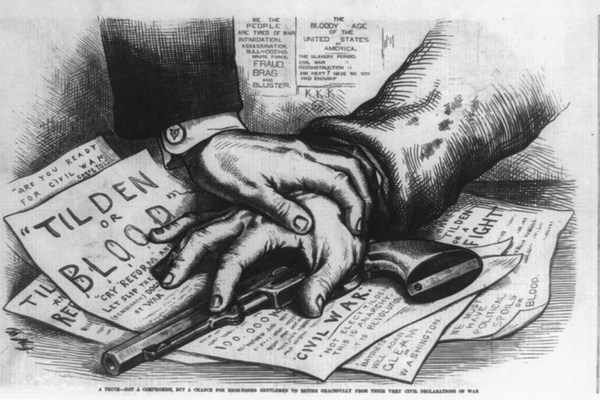 Americans keep asking, “Can it possibly get worse?” and each day we discover that it can. During the first presidential debate, Donald Trump refused to commit to a peaceful transfer of authority if he loses in November, arguing that he did not have to abide by the results of a “rigged election.” This can no longer be dismissed as Trump being Trump. This is a threatened coup.

Five times the United States faced similar crises, and in four cases the “losing” candidate and his party accepted the decision, placing nation over political power. However, one case led to civil war, and in at least two of the cases the nation suffered from the result.

In 1800, Thomas Jefferson was elected President as a result of the 3/5 clause giving added electoral votes to Southern slaveholding states. President John Adams, who was seeking reelection, accepted the result. Adams’s decision not to contest the election led to the first political transition in the United States and established a precedent the country has largely followed for over to two hundred years. The other problem in 1800 was that the way the Constitution was originally written, the leading candidate became President and the second place candidate became Vice-President. Jefferson and his Vice-Presidential candidate Aaron Burr had the same Electoral College vote total so this had to be sorted out in the House of Representatives, which chose Jefferson over Burr. This fiasco led to passage of the 12th Amendment to the Constitution clarifying that Presidential and Vice-Presidential candidates were designated in advance.

The 12th Amendment also established that if the election was thrown into the House of Representatives, each state delegation polls its members and has a single vote. If the 2020 election ends up in the House of Representatives, California’s 53 members representing 39.5 million people will have the same voting power as Wyoming’s single member representing a little over 500,000 people. Some commentators speculate that getting the election thrown into the House may be part of Trump’s reelection strategy because although the Democrats will likely have a clear majority, Republicans may control a majority of the states.

In 1824, four candidates split the electoral vote so none received the majority needed for election. Although Andrew Jackson had the largest electoral and popular vote total, the House of Representatives, under provision of the 12th amendment, selected the runner-up, John Quincy Adams. Adams won because the 4th place candidate, Henry Clay, who was no longer eligible, disliked Jackson and threw his support to Adams. Jackson’s supporters in the emergent Democratic Party later swept the 1828, 1832, and 1836 elections.

But in 1860, crises and collapse could no longer be avoided. Abraham Lincoln, the candidate of the Republican Party, was a regional candidate who did not even appear on the ballot in ten Southern states. Lincoln secured under 40% of the popular vote but 60% of the electoral vote because the Democratic Party was split and also nominated regional candidates. In response to Lincoln’s election, eleven Southern states, anxious to protect slavery, tried to secede from the federal union and plunged the United States into civil war.

The 1876 election result was corrupted when competing slates claimed victory in three Southern states where former Confederates were trying to regain local control and to throw out Reconstruction governments committed to protecting the rights of formerly enslaved African Americans. Although the Democratic Party candidate Samuel Tilden appeared to have strong majorities in both the popular and electoral vote, a special committee appointed by Congress with seven Democrats and eight Republicans awarded all the disputed electoral votes and the Presidency to Republican candidate Rutherford Hayes. In exchange for Democratic Party acquiescence, Republicans agreed to end post-Civil War Reconstruction, effectively abandoning Southern Blacks to Jim Crow white-controlled governments and laws for the next 100 years.

In 2000, a Republican majority on the Supreme Court voted 5-4 to block a recount in Florida, making George W. Bush President. In his concession speech, Democratic Party candidate Al Gore simply said “Let there be no doubt, while I strongly disagree with the court's decision, I accept it . . . for the sake of our unity as a people and the strength of our democracy, I offer my concession.” The 2000 Supreme Court decision may establish a precedent for 2020 that the Supreme Court, which will have a Republican majority, may decide the outcome of the election.

The Trump campaign’s unsubstantiated challenge to the legitimacy of mail-in ballots is angling to throw the election into the courts if he loses. A rightwing Republican majority on the Supreme Court could then support his claim and allow state governments controlled by Republicans to throw out disputed ballots or delay the results past the December 14, 2020Electoral College deadline so small state Republicans can throw the election to Trump in the House of Representatives. In either case, it would constitute a betrayal of democracy and an electoral coup.

This would set the United States up with for four more years of Trump’s and Republicans’ contempt for democracy and majority rule. What would this mean? In a frightening parallel to Germany in 1933, Adolf Hitler and the Nazi Party took control of the German Parliament and government as a minority party, and within eighteen months established a one-party dictatorship.