A Star-Spangled Moment of Reckoning for U.S. Civil-Military Relations?

Gregory D. Foster is a professor at the National Defense University, a West Point graduate, and a decorated veteran of the Vietnam war. The views expressed here are his own. 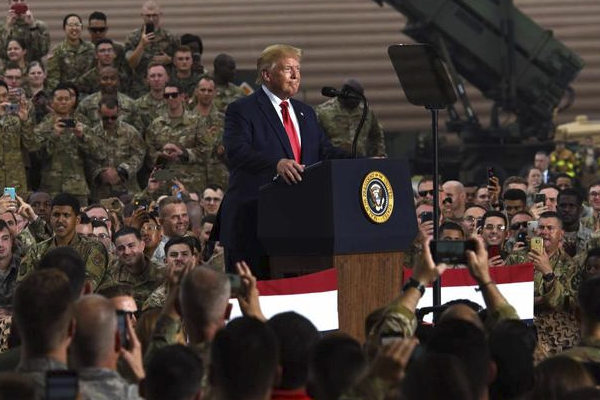 As the American people hurtle toward the presidential election - a civically dispiriting event-in-the-making that promises a nastily contested outcome and the threatened non-peaceful transfer of power - the U.S. military hurtles toward its own come-to-Jesus moment of reckoning.

What comes to mind, oddly perhaps, is not previously contested presidential elections - Bush-Gore in 2000, say, or Hayes-Tilden in 1876 - but the April 25, 2003 National Basketball Association playoff game between the Portland Trail Blazers and the Dallas Mavericks. There, a visibly nervous 13-year-old, eighth-grade girl, Natalie Gilbert, stepped onto the court at Portland’s Rose Garden to sing the National Anthem. Midway through the fourth line - “. . . at the twilight’s last gleaming” - her mind went blank, and she forgot the words. Facing humiliation, she looked around frantically for help. To the rescue - no blaring bugles, no thundering hooves - came Blazers coach Maurice Cheeks, who walked quickly to her side, put his arm around her in encouragement, started singing the words, and coaxed her the rest of the way through to “the home of the brave” ending, the crowd roaring its grateful approval.

What a fitting metaphor. But why? It isn’t at all surprising that such a young person, unaccustomed to the glare of public performance, might choke in front of a raucous crowd of 20,000, plus national and international television audiences. That said, she nonetheless had the retentive powers that accompany youth and, only a year and a half out of elementary school, could reasonably be expected to have fully internalized the words to both the National Anthem and the Pledge of Allegiance.

By way of contrast, when the U.S. military is directed, come November, to intervene in the aftermath of the election to put down popular dissenters accused of insurrection or to surround the White House to “defend” their commander in chief from physical removal (should that be necessary), their leaders will have no excuse for forgetting or ignoring the Constitutional oath they took, lo those many years ago. There will be no Maurice Cheeks-like savior to bail them out and excuse their behavior. They won’t be blessed by a “small” crowd of merely 20,000 sports-obsessed onlookers otherwise oblivious to the affairs of state; all the world, not just American society, will be watching. Such a situation will represent the nadir of the advancing politicization of the military that has taken place over the past four years; with it may come the final dissolution of “the deal” that lies at the heart of the social contract of civil-military relations. So the question will be, what is the military to do? To obey or disobey? To speak or remain silent? To serve their political masters, regardless of motive, or the Constitution and the American people?

On its surface, the Constitutional oath is seemingly simple and straightforward -the all-too-familiar imperatives being to “support and defend the Constitution of the United States against all enemies, foreign and domestic” and to “bear true faith and allegiance to the same.” Regrettably few who have sworn the oath have given it a second thought since they originally raised their right hand; and fewer still have ever devoted time to understanding its underlying meaning. Here, arguably, is what it means:

·      Believe in, subscribe to, be loyal to, and employ legitimately authorized means at my disposal to preserve and protect . . .

·      The principles, values, processes, and institutional prerogatives and arrangements . . .

·      Specified and embodied in (a) the Preamble, (b) the main body, (c) the amendments, and (d) the philosophical foundation (the Declaration of Independence) . . .

So, for the many who have taken the oath but never thought about its meaning, it means that all parts of the document (even the aspirational Preamble, which could be said, in toto, to be America’s Security Credo) embody principles, values, processes, prerogatives, and structural arrangements that must be embraced, protected, and practiced. But the Declaration of Independence, you say? Isn’t that a bridge too far? No, not at all. The seminal second paragraph of the Declaration underscores the purpose of government (to secure and preserve the specified and unspecified natural rights all human beings, not just citizens, deserve to enjoy), emphasizes the essentiality of government derived from the consent of the governed, and enjoins those subjected to tyrannical rule to exercise their right - and their duty - to dispose of such tyranny. If one accepts this expansive view of the oath, it puts those who have taken the oath in the position of having to think deeply about the lengths and limits of their authority to either enable or inhibit legitimate dissent - and to act accordingly.

The presidential oath of office is seemingly more oblique and contingent: “to preserve, protect and defend the Constitution” to “the best of [his] Ability.” Who can say how firm that commitment is expected to be in light of its reliance on presidential ability (and ability’s relationship, in turn, to will)? At least, in principle, the Constitution also directs that the President “shall take Care that the Laws be faithfully executed,” the Old English use of the word “shall” connoting an obligation born of necessity. By association, therefore, as executive agents of government, the military itself is expected to uphold the rule of law by taking care that the laws be faithfully executed, with the Constitution to which they have sworn their loyalty being “the supreme Law of the Land.”

The oath is the tangible instrumentality of the social contract of mutual rights, obligations, and expectations that binds the military to its civilian overseers (executive and legislative) and both, in turn, to society as a whole. Though there are plenty of authorities on the subject who would argue that the military is obligated - unconditionally, regardless of circumstance - to obey properly constituted civilian authority, there is a fully defensible argument to be made that at the heart of this contract is a contingent, quid-pro-quo “deal.” The deal is basically this: In return for the deference, obedience, compliance, and silence the military willingly relinquishes in the interest of remaining politically neutral, uniformed professionals expect certain things in return from their civilian masters: specifically, strategic literacy, strategic competence, and strategic leadership. Where civilian authorities fail, willingly and repeatedly, to demonstrate such attributes, the deal is broken.

What if the military rightly expects the cherished precepts of popular sovereignty, the rule of law, separation of powers, checks and balances, and civil liberties (such as due process, equal protection, free press, habeas corpus, and search and seizure limits) to be observed and demonstrated by those in power; but instead experiences a reality of polarization, inertia and entropy in the processes of government (e.g., no declarations of war, no budgets, executive orders taking precedence over laws, and executive agreements superseding treaties for reasons of convenience and expediency), executive-legislative collusion without cooperation, party and ideology regularly overriding institutional responsibilities, and the unceasing imperialization of the presidency?

What if the military understandably expects such traits as vision, courage, competence, integrity, accountability, and empathy from the political leaders to whom its members have subordinated themselves; but instead, reflecting what might be called “the saga of the vanishing role models,” sees only myopia (tunnel vision, parochialism, and provincialism), cowardice (sycophancy, toadyism, and obsequiousness), incompetence (cluelessness and incomprehension), hypocritical expediency (opportunism and dissembling), unaccountability (finger-pointing and blaming), and contemptuous intolerance (in the form of hateful “-isms” too numerous to mention)?

What if the military legitimately expects from public officials unwavering ethical propriety in the form of conscience (the “inner voice” of right), character (emulation-worthiness), principle (consistent action in the service of the public), example (practicing what one preaches), altruism (where Other-interest is accorded priority over Self-interest), and an unequivocal commitment to truth and justice (where fact provides the basis for fair treatment); but instead is forced to tolerate unhesitating shamelessness, excessive pridefulness, self-absorption, and me-ism, convenience and expediency in lieu of adherence to consistent standards, the irrelevance of model behavior, incessant selfishness, demonization, and marginalization, and, overlaying all else, the Death of Truth (in favor of disinformation, misinformation, and false narrative)?

These rhetorical what-if questions are ones the military should already have been asking itself, and we – the public – must yet ask of the military as November 3 fast approaches. The answers to these questions will determine whether a deal of such mammoth national importance, if broken, means that all bets are off and higher-order imperatives command the allegiance of those in uniform. When answers come, they will set the course – perhaps a new course – for civil-military relations in this country.