Thomas Lecaque is an assistant professor of history at Grand View University in Des Moines, Iowa. 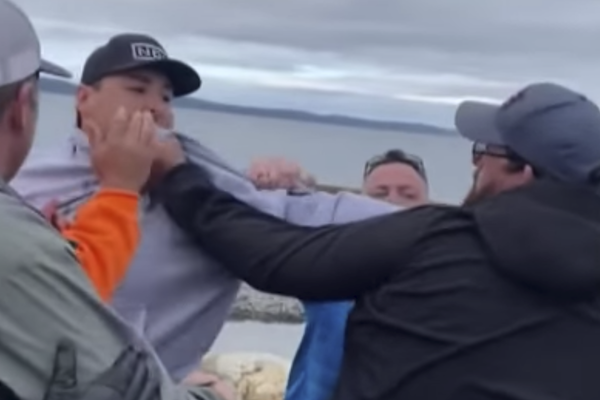 Chief Mike Sack (black cap at left) in an altercation with non-native fishermen who have forcibly interfered with the Sipekne'katik First Nation's exercise of treaty fishing rights off of Nova Scotia.

Words have power. We’ve seen the rise of stochastic terrorism in the United States inspired by President Trump’s rallies, speeches and tweets, from the El Paso massacre to the governor kidnapping plots. We’ve seen the unmasked crowds of people who deny COVID based on conspiracy theories. What we don’t see most of the time is the way our words about the past have the power to incite violence. And yet, a week after we as a nation once again, inexplicably, celebrated Columbus Day on Indigenous Peoples Day, anti-Native violence is ongoing and ignored across the United States and Canada.

In Nova Scotia, white Canadians are currently attacking Mi'gmaw fishers, burning buildings, destroying property and catches, and engaging in racist violence without the government doing anything to stop them. In Ontario, a housing developer began construction on unceded Six Nation (Haudenosaunee) lands; when land defenders halted the construction, court orders led to arrests and charges against indigenous activists to date.  In Arizona, the construction of the Trump Administration’s border wall has led to the destruction of burial and other sacred sites, the desecration of Native lands, and ongoing attacks on O’odham land and water defenders by militarized police forces. And in the broader disaster that is the Trump Administration COVID-19 response, the CDC released a study in August showing how disproportionately COVID-19 impacts Native populations.

This is all continuing domestic white supremacist terrorism, an ongoing tradition on these continents since 1492. As a historian, sadly, I see none of these incidents as surprising—they are part of a lengthy tradition of violence. This fall, however, has seen a spate of “white innocence” articles specifically aiming to silence the discussion of Euro-American violence against the indigenous peoples of the continents we call the Americas. I have written previously in Foreign Policy about an article in the British newspaper The Spectator by the medieval historian Jeffrey Fynn-Paul, who argued that Canadians should hold European colonizers blameless for the death toll in the New World. Political scientist Bruce Gilley had a previously published article, the “Case for Colonialism,”  retracted in 2017 and a contracted book series , Problems of Anti-Colonialism, canceled by a press. But Gilly turned this into an outrage campaign online, one of many undertaken when shoddy colonial apologia are pushed back on, suggesting the viewpoint is more widespread than one would hope. More problematically, of course, is that we just “celebrated” Columbus Day, with the usual spate of articles denying his atrocities, exhorting us to celebrate his accomplishments, comparing Columbus Day to Martin Luther King Jr. Day, and questioning the motives of anyone decrying his legacy, from President Trump on down.

These articles and proclamations have power, and in this case that power is malicious. The President’s Columbus Day Proclamation sets the tone, complaining that “extremists seek to replace discussion of his vast contributions with talk of failings, his discoveries with atrocities, and his achievements with transgressions,” explicitly linking this to his 1776 Commission remarks and attacks on Critical Race Theory. This projection—the idea that academics, rather than the Trump Administration, are engaged in selling “toxic propaganda, ideological poison that, if not removed, will dissolve the civic bonds that tie us together”—would be more amusing if it did not have real world consequences.

In Muskegon, Michigan, Trump led a crowd to boo at Indigenous Peoples Day, specifically against Biden pointing out the centuries of mistreatment and broken treaties between the United States, European colonial powers, and Native polities. Trump has repeatedly engaged in anti-Native rhetoric (perhaps most visibly his continued use of “Pocahontas” as a racist slur including during the first presidential debate), more or less ended the White House Council on Native American Affairs, took Mashpee Wampanoag land out of trust—doing this to Native land for the first time in half a century—and tweeted racist rhetoric against HR 312, the bill to restore the reservation. This is added to cutting the size of Bears Ears National Monument by 85%, pushing for the opening of the Arctic Refuge for drilling over objections by the Gwich’in Steering Committee, and continued voter suppression against Natives, among other groups. And just this week, the Trump Administration announced it will open up more than half of the Tongass National Forest to logging and other development, despite the territory being traditional homeland to the Tlingit, Haida and Tsimshian people.

These attacks have history—a long history in Trump’s case—and that history is one of violence. Trump’s praise of Columbus, promotions of settler-colonialism like Jeffrey Fynn-Paul’s Spectator article, and other colonialist apologia, are violent. This is deliberate—another prong of denying racism in American history in order to deny racist intent, while enabling action harming indigenous people and communities in the American present. Of course President Trump wants us to ignore this—his idea of history is to allow only traditional white supremacist mythic history to survive--"We must teach future generations about our storied heritage, starting with the protection of monuments to our intrepid heroes like Columbus." That storied history is one of repeated dehumanizing, violent, genocidal attacks on Natives.

And that violence has not stopped. The Trump Administration immigration policy is violently anti-Indigenous—Mayan children and youths have died in CBP custody or been shot by Border Patrol agents, and border wall construction destroys Native sacred sites and causes massive environmental damage. The Trump administration executed Lezmond Mitchell in August over Navajo objections that the sentence violated tribal culture and sovereignty. And Donald Trump’s decision to celebrate the Fourth of July at Mount Rushmore, a symbol of the violence of United States occupation of Lakota land and a monument to colonial rule—the face of four Presidents with noted anti-Native policies--blasted into a sacred site against treaty promises, would be followed by increasing waves of coronavirus in a state with nine large Native reservations. Add to this the actions of Governor Kristi Noem, including threatening to sue the Sioux for blocking entrance to their reservations to protect from Covid and allowing the Sturgis Motorcycle Rally and Trump’s event to go ahead, and the Trumpist pandemic response in the state is even worse. The continuedaftereffects of Trump’s pandemic response, combined with Trump’s historic and ongoing attacks on Native communities, have been disastrous.

Preserving history is not sugarcoating it. Patriotism is not ignorance. Ignorance is not strength. Strength is not goodness. Trumpsays that he wants "our educators to teach our children about the miracle of American history and honor our founding." Educators should teach about the actual histories of the continents we call the Americas, hear a multiplicity of voices, acknowledge the crimes our founders committed, and work to build an America worthy of love of country. When Trump says, "We inherit that optimism, along with the legacy of American heroes who blazed the trails, settled a continent, tamed the wilderness, and built the single-greatest nation the world has ever seen," he is erasing the murder of Natives, the stealing of lands. That violence is ongoing. These abstract ideas lead to the destruction of Native heritage, the death of Native elders and the knowledge and traditions they preserve, the violation of Native rights. These abstractions mask ongoing cultural genocide. Ignoring it, dismissing it, defending it, allows it to continue unopposed.