Unforgettable Images, and Something New in TV News 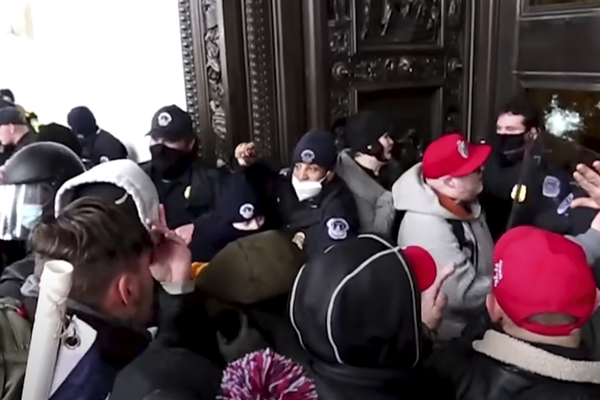 When a person takes a still picture or records a video of a sudden, unexpected or violent event—a car accident, a plane crash or the like—on a cell phone, it often has historical value not for what it shows but because it captured the moment. If of real value it might then exist in an archive somewhere and probably forever. There is a meme that nothing ever dies on the Internet. What happened on January 6, 2021 will undoubtedly live forever. Some think the serendipity of clicking a camera or turning on a video recorder is a form of citizen journalism. It’s not that, exactly. There are times, however when random cellphone images have a role to play in telling an important story.

In Washington, D.C when professional journalists, especially those in television braved that dangerous situation to create an historical record, every second and frame of which is undergoing scrutiny like no other event in modern times, what they captured is unique beyond belief. Something else was going on that we should not ignore. Along with the professional camera operators who did an outstanding job of covering the attack on the Capitol were the many journalists who normally do not shoot video. They used their cell phones in ways they never imagined. They were recording the event the same as non-professionals filling their camera with random video that is proving to be astounding. They were providing us, the viewer, with images we never thought we would ever see.

Looking back on the riot through the cameras of those who took many of the pictures of the storming of the Capitol reminds us that we cannot take lightly the power of live coverage by TV news. Fortunately the television networks in front of the Capitol were there to cover what everyone thought would be a benign demonstration, though there were those who believed otherwise. No journalist or pundit completely took into account the power of President Trump's inciting words. No one took into account how his followers would interpret what he said and become the mob that obeyed him to overthrow our government.

As soon as the mob got out of control, which was faster than anyone thought possible, and it breached the Capitol, smashing its way into the building, reporters, camera persons and producers went to work showing the events on live television. They recorded compelling, powerful images of what they saw for a rapt audience, for the record, and for future historians. Ultimately the FBI and all other law enforcement would use their pictures to build a case against individual invaders. Personal cell phones were also recording the event in ways the professionals could not cover. In a word, there were more cell phones in use than professional cameras. Cell phones were able to get close pictures inside the anger, violent and mostly out of control mob where the professionals, because of their limitations of size and accessibility, could not easily go. Professionals were inside the mob filming the riot but they were limited because there were fewer of them to cover all the angles.

We should not forget that It was an event unlike almost anything we had ever seen in the past unfolding in real time in front of us as we sat on the edge of our couches watching Most of the time when an event unfolds before our eyes, unless there is a working surveillance camera system, we are not around to see the car or plane crash, the drive-by shooting, or a major demonstration that is often peaceful but sometimes not. Recently cameras were present in cities around the country for Black Lives Matter demonstrations, especially when demonstrators and police clashed. Go back to 1992 for Ruby Ridge, where there were cameras but little to record except the seemingly endless waiting game. In Waco, Texas in 1993, only at the end were there images that shook us. The Oklahoma City bombing in 1995 provided us with what we in the news trade call aftermath, which was terrible enough.

I was a member of a production team at NBC News that covered Martin Luther King's huge march in Washington in August 1963 when more than 250,000 people massed in front of the Lincoln Memorial to hear King deliver his "I have a dream" speech. People arrived. They marched. They stopped in place. They prayed. They listened. They dispersed. They returned home. We, and the other networks (CBS and ABC back then) dutifully covered the event on live television. When the event ended we ended our coverage and went back to regular programs. There was no violence. Respect reigned.

January 6, 2021 produced different images from all sources of a kind that became the highlight reel of that year or any year into the future. New, graphic and violent pictures continue to emerge every day often accompanied by terrifying, threatening voices primed to destruction and murder. In some ways, the images have become so regular they threaten to easily inure us from their power. We must remain vigilant and keep looking at all images as they unfolded before our eyes. The storming of the Capitol or a similar event could happen again. By keeping the images from January 6, 2021 in front of us, it might help us understand what is happening if it ever does.