Opportunities for a Catholic President, Then and Now

Patrick Lacroix is the author of John F. Kennedy and the Politics of Faith (University Press of Kansas, 2021). 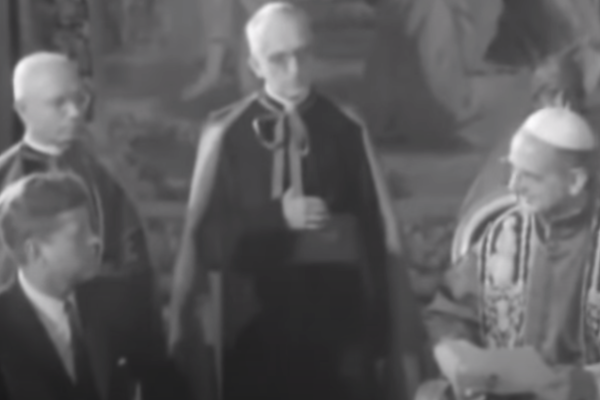 The election of a second Catholic president—the first in sixty years—last November has already inspired extensive analysis of Joe Biden’s faith and how it might shape American religious activism during his administration. At first glance, Biden may seem unlikely to foster greater dialogue or heal longstanding divisions. In the last two presidential elections, white evangelical Protestants voted for the Republican ticket by a 4-to-1 margin. Since the turn of the century, the two major parties have split Catholic ballots almost evenly; in 2020, even as one of their own, Biden won no more than 52 percent of the Catholic vote, which was only a slight increase from Hillary Clinton’s score four years earlier.

These figures confirm what many know even from a passing understanding of American politics: Democrats have a religion problem. This is nothing new. Starting in the late 1960s, many white Catholics became uncomfortable with the pace of social change. Although few would leap from the silent majority to the Moral Majority, their voting patterns came to resemble those of white evangelical Protestants. This occurred as many progressive Catholics left the fold in the wake of Humanae Vitae, the 1968 papal encyclical on birth control. Guided by traditionalist bishops, conservative Catholics began to occupy more space within their own church. Abortion came to occupy more political space. Increasingly identified with liberal values, the Democratic Party struggled to retain this group. Catholic Democrats have had to answer for their convictions and, since Jimmy Carter, party leaders have often failed to speak to the concerns of people of faith.

As a devout Catholic and political moderate, President Biden now has an opportunity to broaden the Democratic tent from a religious perspective. If he is willing to play the part of an honest interfaith broker, he could do much worse than to turn to the first Catholic president’s playbook.

The story of John F. Kennedy’s presidential campaign is well-known. In 1960, Kennedy waged a constant battle against prejudice. During the Wisconsin and West Virginia primaries and again during the general campaign, he had to assert and reassert his ability to “faithfully execute the office of President of the United States” and to “preserve, protect and defend the Constitution of the United States.” One could be a faithful Catholic and a loyal American, he argued. Only a minority of Protestants were so convinced. On election day, Kennedy took approximately 80 percent of the Catholic vote; his score among Protestants was roughly equal to Adlai Stevenson’s in his stinging defeat four years earlier. Denominational silos still seemed impermeable.

Another story awaits those who delve deeper. Through adviser Theodore Sorensen, Kennedy reached out to prominent figures within the mainline National Council of Churches (NCC) in the spring of 1960. A week before the West Virginia primary, these leaders—including Eugene Carson Blake, Edwin Dalhberg, and Francis B. Sayre, Jr.—issued a statement that forcefully denounced the role of religious bigotry in the presidential contest. Intellectual heavyweights like Reinhold Niebuhr and John C. Bennett of Union Theological Seminary supported Kennedy. The Democratic campaign even recruited the NCC’s James Wine to increase outreach to Protestants following the party conventions.

The new administration was embittered by the Catholic bishops’ resistance during the campaign and their opposition to proposed federal aid to public schools. On the other hand, the mainline Protestant allies that Kennedy, Sorensen, and their team had gained in 1960 did not soon desert them. Fundamentalists generally remained beyond the White House’s reach, but Baptists responded favorably to the president’s firm stance on church-state issues.

In 1963, in the wake of international and domestic crises, Kennedy again partnered with mainline Protestants who shared his political vision. Through the National Conference on Religion and Race, an interfaith event held in Chicago in January 1963, he learned to speak their language. The rhetoric of moral justice shined through his quest for civil rights legislation. In fact, as the administration tacked left in its final year, it discovered Protestants ready to support a liberal course on race and foreign relations. These allies played an essential role in the campaign to ratify the nuclear test ban treaty and the civil rights bills put forth by Kennedy and his successor. Encouraged by the administration’s friendly approach, many white, liberal Protestants took this spirit of good will and social justice back to their congregations.

Scholars have fairly noted that Protestant congregations have typically been more conservative than their pastors and certainly more so than the intellectuals and organizers playing a leadership role in umbrella organizations like the NCC. The Religious Left that came in the wake of Kennedy was never a broad-based movement. Nevertheless, it is significant that a Religious Left did develop—that Kennedy was undeterred by his poor score among Protestants in 1960 and remained true to his pledges. In shared venues, he listened to American Protestants and together they rallied around common political objectives. This should be as central to Kennedy’s legacy as his role as a Catholic trailblazer.

In light of the religious vote in last November’s election, the second Catholic president would be justified in sensing futility in outreach to people of faith. But, like his predecessor, Joe Biden is uniquely positioned to create connective tissue between people of different traditions and outlooks. Though he might have to start from a very low common denominator, Biden may gain a great deal for his party—if not the political health of the nation—by listening and forthrightly addressing the concerns of people who sought a religious refuge in the Trump movement. Unlike Kennedy, he would have to begin such a sizeable undertaking with people of his own church.

Democrats cannot rest their hopes for their party merely on growing cultural diversity; however bruised they may be from the tribulations of the Trump years, they must be active in building a bigger tent. Their figurehead in the White House can and should model that spirit of exchange, and his sincerely-held beliefs may be the essential factor in that hard and often thankless work.