Elise Lemire is the author of the just released Battle Green Vietnam: The 1971 March on Concord, Lexington, and Boston (University of Pennsylvania Press) and other titles.  She is Professor of Literature at Purchase College, SUNY. 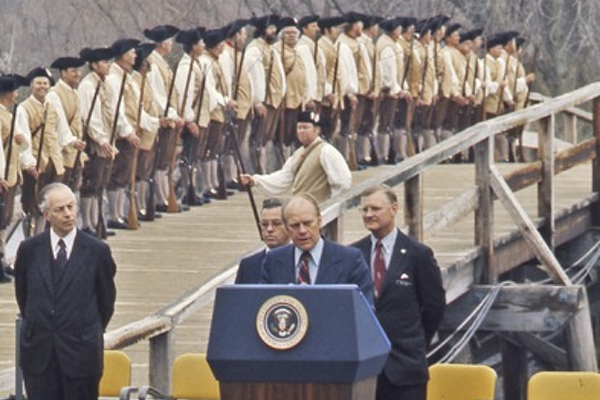 This July Fourth marks the beginning of the final countdown to our nation’s Semiquincentennial or, as the United States Semiquincentennial Commission, created by Congress in 2016, prefers to call the almost unpronounceable anniversary of the date on the Declaration of Independence, “America 250.”

In its almost 300-page report to the president, the Commission sees the years leading up to July 4, 2026, as an opportunity to “deepen understanding of our history” through education, engagement, and unity.  And yet it fails to mention those historical events the citizenry would do well not to repeat and thereby most needs to know.

We could be in for a repeat of the sugarcoating that was the Bicentennial.

President Ford’s movements and remarks seem to have been a concerted effort to erase the Vietnam War and, specifically, the antiwar activism of those who knew from firsthand experience that American atrocities were a regular occurrence in Southeast Asia: American GIs and Vietnam veterans.

On the evening of April 18, 1975, President Ford kicked off the nation’s fifteen-month birthday celebration at Boston’s Old North Church.  After flashing “One if by land, and two if by sea,” as the poet Henry Wadsworth Longfellow famously wrote in “Paul Revere’s Ride,” he flashed a third lantern to signal the commencement of the nation’s third century.

The next morning, the president commemorated the 200th anniversary of the momentous events that ensued after Revere’s warning reached the towns of Lexington and Concord.  Speaking in Concord, where colonial militiamen returned fire on the advancing Regulars, Ford linked the colonists’ bravery and determination to the nation’s current fighting power.

“From a newborn nation with a few ships,” the President intoned in front of the town’s famous Minute Man Statue, “American seapower now ranges to the most distant shores. From a militia of raw recruits, the American military stands on the frontlines of the free world.”

In Lexington, the President memorialized the Revolutionary War dead by laying a wreath at that base of that town’s very similar Minute Man Statue.

The following year, on July 4, 1976, President Ford commenced the day’s festivities at Valley Forge, where the Continental Army endured a bitterly cold winter.

The president then flew by helicopter to Philadelphia where he gave a lengthy speech at Independence Hall defining the nation’s goal for its third century as continuing America’s “leadership in world affairs.” It was a role he said the nation deserved.  “The United States today remains the most successful realization of humanity’s universal hope.”  “We still,” he assured the massive crowd and people watching at home on television, “show the way.”

By 2 PM, President Ford and his wife were on the massive deck of the USS Forrestal in New York Harbor ringing a ceremonial bell thirteen times in commemoration of the thirteen original colonies.

President Ford never once mentioned the Vietnam War at these Bicentennial events even as eleven days after his trip to Concord and Lexington, the forces against which the United States had been fighting in Vietnam liberated Saigon, forcing the remaining Americans to evacuate.

“It was sad and tragic in many respects,” the President concluded at a press conference the following month when asked if there should be a commission assigned the task of learning where the United States had gone wrong in Vietnam.  “I think it would be unfortunate for us to rehash allegations as to individuals that might be to blame or administrations that might be at fault.”

From the point of view of Ford and the United States government, the Bicentennial was an opportunity to start afresh.

But first, the federal government needed to erase the nation’s still-vivid memories of America’s own military personnel taking unprecedented actions to end the horrors they knew were taking place daily in Vietnam.

In the fall of 1970, over 200 members of Vietnam Veterans Against the War had marched in their jungle fatigues from Morristown, New Jersey, to Valley Forge.  By performing mock search-and-destroy missions along the way, they demonstrated how far the nation had fallen from the ideals of those Americans who declined to join the mass desertion of General Washington’s army.

The following spring, members of VVAW journeyed to the Old North Church to deliver a message to the people that President Nixon was accelerating the air war in Southeast Asia despite his announcement that he was drawing down American ground troops in a bid to fulfill his campaign promise of “peace with honor.” =

“One if by land, two if by sea, and three if by air,” read the VVAW press release describing the flares its members sent high into the Boston sky.

Over the course of the next three days, New England’s antiwar Vietnam veterans marched Paul Revere’s route in reverse, starting at the Old North Bridge, where they claimed allegiance to the patriotism embodied by the Minute Man Statue.  Like the farmer who left his fields to protect the colonists’ rights, they had left their newly achieved civilian lives to stop the country they loved from being the imperialist aggressor their forefathers had once fought to vanquish.  VVAW’s efforts attracted national attention when the Lexington Selectmen ordered a mass arrest of both the veterans and hundreds of their civilian supporters for taking a stand against the Vietnam War on the town’s sacred Battle Green.

In December of 1971, twenty-five members of VVAW struck again when they occupied several sacred American sites across the nation, including the Statue of Liberty and Betsy Ross’ House, the latter just a few blocks from Independence Hall in Philadelphia.  There at the home where America’s first flag is said to have been made, antiwar veterans hung an American flag upside down in a signal of distress.

President Ford’s presence on the USS Forrestal best exemplifies his intention to reclaim the sites of GI and veteran antiwar protest.  In 1967, the supercarrier had spent a month in the Gulf of Tonkin launching attack aircraft as part of an effort that eventually dropped more ordnance on Southeast Asia than was dropped on all of Europe during WWII.   The Forrestal returned to the US only after 134 sailors were killed in a massive onboard fire caused by electrical mishap or pilot’s error.  On June 10, 1972, while the ship was docked in Norfolk, another massive fire broke out on the supercarrier.  This second fire was no accident.  Rather, it was the single largest incident of sabotage in American naval history.  One of many acts of resistance to the Vietnam War carried out by Stop Our Ships (or SOS), it caused over $7 million in damage and delayed the ship’s return to active duty for three months.

While it is no coincidence that Ford’s Bicentennial movements matched those of VVAW and SOS, in that how we mobilize the sacred sites and potent symbols of our nation’s history and its capabilities is critical to how we shape our future, his administration contributed to Vietnam War amnesia and revisionism.  Lexington, Concord, and Valley Forge are once again known for their role in the American Revolution and not as the places where Vietnam veterans played a significant role in turning the tide of the Vietnam War, while the POW/MIA flags that now fly below almost every American flag, including the one atop the White House, tell a story of American victimization that belies our role as the world’s most powerful military force.

As the United States’ Semiquincentennial Commission notes, the nation’s upcoming 250th birthday is an opportunity to educate.  However, the Commission’s goal of unity can only be achieved through the kind of honest assessment of the nation’s past that President Ford sought to avoid.