The Republicans Have Abandoned the Big Tent 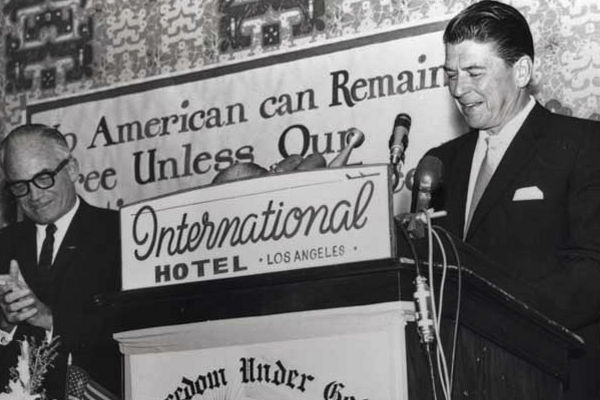 Historically, major political parties in America are diverse organizations as they are divided into wings and sometimes factions with their own interests. To be successful, the parties every four years must sublimate their internal differences and unite behind a presidential candidate. This process has been commonly called “threading the needle,” appealing to the vast moderate population in the center of the political spectrum while maintaining the support of the more extreme voters further from the center. In the Post-World War II era, the Republicans became adept at the process of uniting its conservatives, moderates, and liberals while even satisfying the rightwing fringe. The Republicans became a “big tent.” But today, the part has abandoned its broad appeal to the center in favor of using an Electoral College advantage, gerrymandering, voter suppression and appealing mostly to white voters. How did this happen and what does it mean for the future?

By the early 1950s, the Republicans had lost five consecutive presidential elections. Hoping to reverse the trend in 1952, the party nominated a war-hero moderate, General Dwight Eisenhower. Conservatives backing Senator Robert Taft of Ohio for the nomination were bitterly disappointed but had nowhere else to go, and liberal Republicans were largely satisfied. The Republican Party’s rightwing fringe was less concerned with economic issues and more interested in the anti-Communist crusade led by Joseph McCarthy. Eisenhower deplored McCarthy’s tactics and his attacks against Eisenhower’s World War II commanding officer, George Marshall. But when Eisenhower went to Wisconsin campaigning for president, he gave a speech endorsing McCarthy for re-election to the Senate and making no mention of Marshall. That was good enough to thread the needle, keeping the support of Republican moderates and winning many conservatives of both parties while satisfying the McCarthyite fringe. McCarthy called Eisenhower’s nationally televised speech in Milwaukee “wonderful.”

In 1960, the GOP nominee Richard Nixon also attempted to unite the party by threading the needle. Nixon’s past as a cold warrior let him keep anti-Communist conspiracy theorists in line without embracing a radical-right domestic agenda, as he attempted to come across as reasonable as Eisenhower, keeping the big tent intact. Nixon hoped to unite the Republicans and win considerable support from independents as Eisenhower did. Failing to garner enough independent votes or Southern conservative Democratic votes, Nixon narrowly lost the popular vote and the Electoral College.

A break in the Republicans’ inclusive approach occurred in 1964, when the party nominee chose not to create a big tent, resulting in electoral failure. That year, the party’s conservative wing won the presidential nomination with a message of considerably less government and virulently anti-Communist foreign policy. In Barry Goldwater’s acceptance speech at the Republican National Convention he said, “I would remind you that extremism in the defense of liberty is no vice! And let me remind you also that moderation in the pursuit of justice is no virtue!” The lines were written for Goldwater by political historian, professor, and columnist Harry Jaffa.

The most powerful rightwing anti-Communist organization promoting conspiracy theories was the John Birch Society, founded by candy mogul Robert Welch who claimed that the U.S. Government was under control of the Communist Party. Goldwater renounced Welch as being “removed from reality” but commended the Birch Society and its “upstanding citizens.” Goldwater accepted campaign donations from Birchers. With no attempt to attract moderate or liberal Republicans, Goldwater won only 39 percent of the popular vote, his home state of Arizona, and five Southern states where few African-Americans had the right to vote. Most Americans perceived a takeover of the Republican Party by the right wing fringe. By rejecting moderation the big tent was diminished.

By 1968, the Republican Party still included conservatives, moderates, and liberals. However, due to tumultuous times the presidential election landscape was unique. Many Americans, some influenced by racism, were adversely reacting to racial disorders, antiwar protesters, and the counterculture. Appealing to what he called the “silent majority,” Richard Nixon devised a “Southern Strategy” for attracting white Southerners, but speaking in more moderate tones in the North. He carried enough states in that region to win the election and the next. He appealed to enough moderates and even Republican liberals.

By 1976, conservatism was beginning once again to dominate the Republican Party, particularly because the primary system gave conservatives a greater voice in choosing the nominee. President Ford was hard pressed by the right wing led by Ronald Reagan. Ford survived by trying to mollify the extreme conservatives by emphasizing his impressive record of vetoing Democratic legislation, and he quit using the word “detente,” which conservatives called appeasement of the Soviet Union. Ford’s history as a respected Congressional leader won moderate Republican votes, conservatives, and the rightwing fringe, which was almost enough to produce a victory with 48 percent of the popular vote. The big tent was almost big enough for victory.

In 1980, considerable needle threading was required as Ronald Reagan was the nominee. This was the man who once called the progressive tax a tool of the Communist Revolution. He seemed to be the trigger-happy man who in 1960 proclaimed that we were already at war with the Soviet Union. The Republicans were able, however, to preserve the big tent with Reagan as a disciplined, affable candidate who, in his debate with President Carter, promised to attempt negotiations with the Soviet Union with a goal of nuclear arms “reduction.” The extreme conservatives who had always supported Reagan continued to do so. In addition, the religious right and many moderate Republicans contributed to Reagan’s winning 44 states. The big tent was quite large

The Republican nominees 1988 – 2012, George H.W. Bush, Bob Dole, George W. Bush, John McCain, and Mitt Romney had backgrounds in the Republican establishment. They had histories favorable to attracting moderate voters. Their task was to prove conservative and religious right bona fides. For example, George W. Bush promised to fight for a Constitutional amendment banning same-sex marriage and Romney promised to repeal the Affordable Care Act on “day one,” although as Massachusetts governor he signed into law a similar measure. Although not always enough to get elected, these candidates won the conservatives, moderates and the rightwing fringe. Liberals--now called Progressives--were mainly disappearing from the Republican Party

The years 2016 and 2020 ended the big tent. Donald Trump, who ran for president without a political record, had only years of interviews without a discernible ideology. Trump chose to veer hard-right on religious and domestic issues as his path to the nomination and presidency. He showed no interest in a big tent. Yet he won due to a combination of whites’ nervousness about the future and embrace of racism, an opponent with high negatives, and most of all, the Electoral College. Trump got 46 percent of the popular vote versus 48 percent for Hillary Clinton, which would ordinarily mean defeat. In 2020, Trump tried the same formula, but lost because too many whites in suburbs and rural areas deserted him. The big tent has been fully abandoned.

In conclusion, the Republican Party since World War II has been right of center, but its aim was to capture a broad center of the electorate while controlling its rightwing fringe. In 1964, with Goldwater’s nomination the conservative wing became dominant. The party nominees from Nixon to Romney took positions on issues from economics to foreign policy to culture that were hard-right conservative. However, these nominees were able win a respectable share of the moderate voters due to their establishment backgrounds and reputations or in the case of Reagan an ability to communicate trust. Yet the big tent was shrinking with fewer moderate voters and fewer people of color in the party. Republican leaders also realized that tactics such as voter suppression and gerrymandering were needed to make up for the now abandoned big tent. By 2016 the party was ripe to be captured by a man who had no interest in the big tent and saw angry conservative voters and religious right as his ticket to the White House. By 2021, the Republicans lost the presidency and both houses of Congress, but Trump and other party leaders have doubled down on those same tactics;  it’s apparent the Republicans no longer see the big tent as the solution.