Rule 50 and Racial Justice: The Long History of the IOC War on Athletes' Free Expression

Debbie Sharnak is assistant professor of History and International Studies at Rowan University and author of the forthcoming book, Of Light and Struggle: The International Histories of Human Rights and Transitional Justice in Uruguay with the University of Pennsylvania Press.

Yannick Kluch is assistant professor and director of inclusive excellence in the Center for Sport Leadership at Virginia Commonwealth University. An expert on the intersection of sport and social justice, Dr. Kluch has advised organizations such as the USOPC, USA Diving, and the NCAA on how to make sport more equitable and inclusive. 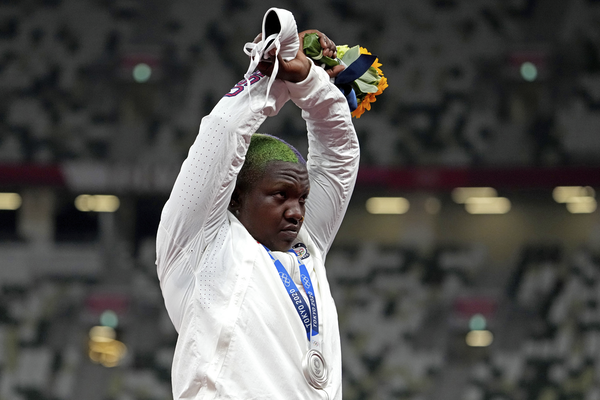 On July 31 Raven Saunders won the silver medal in women’s shot put at the Tokyo Olympics. On the podium, she raised her hands above her head in an X formation. Saunders, a Black LGBTQ athlete, explained that it symbolized “where all people who are oppressed meet.” Immediately after the ceremony, the International Olympic Committee (IOC) launched an investigation into the hand gesture as a potential breach of the Olympic Charter’s Rule 50, which states that “no kind of demonstration or political, religious or racial propaganda is permitted in any Olympic sites, venues, or other areas.”

Officials suspended the investigation after her mother passed away; however, the controversy surrounding the Rule 50 is not going away. Debate about the right of the IOC to govern protests dates back to 1955, when the Olympic Charter first mentioned demonstrations in its bylaws. The Charter rules about protest have been fluid and at times ambiguous over the last six decades, reflecting the IOC’s desire to limit athletes’ rights in the service of promoting the myth that the Olympics could transcend politics. However, the recent rise of athlete activism brings the IOC’s claim that sports are a neutral space into direct conflict with athletes’ increasingly vocal demands for freedom of expression and the right to use their platform to advance human rights and social justice issues.

Indeed, protests at sporting events have proliferated around the globe in recent years. From Colin Kaepernick’s kneeling to Premier League protests against racism and activism for indigenous rights in Australian sports leagues, athletes are increasingly using their stardom to spotlight and advocate for pressing concerns in their societies. Yet, the Olympics garner a special sort of scrutiny as one of the most watched events in the world. Even with no fans allowed at this year’s games and lower viewership than usual, the summer Olympics average 2 billion viewers around the globe and companies pay astronomical amounts for the right to televise and stream them. This attention brings with it the ability for athletes to raise political issues that animate them.

Yet, IOC governing officials have long sought to fend off this type of attention. Pierre de Coubertin helped resurrect the modern games in the 1890s and was fervent in his view that Olympic ideals transcended differences in culture, history, and geography. Avery Brundage, a Michigan-born businessman, furthered these ideas. Brundage participated in the 1912 Olympics as an athlete, and ascended to the presidency of the U.S. Olympic Association and Committee (USOC, now known as United States Olympic & Paralympic Committee [USOPC]) from 1929 until 1953, a period that coincided with his vice presidency of the IOC from 1945-1952. He took over as president of the IOC in 1952 and held the position until 1972. Brundage had a long track record of attempting to ignore the significant interweaving of politics and sports, perhaps exemplified best by his refusal to boycott the 1936 Olympic Games in Nazi Germany as the president of the USOC.

Throughout his tenure as president of IOC, Brundage clung to the idea that he could create an apolitical arena for the Olympics, which was reflected in the Olympic Charter in 1955. Immediately upon taking over the presidency, Brundage amended the bylaws to stipulate that potential host cities: “must state that no political demonstrations will be held in the stadium or other sport grounds, or in the Olympic Village, during the Games, and that it is not the intention to use the Games for any other purpose than for the advancement of the Olympic Movement.” While the revision furthered Brundage’s idea that the Olympics could bring together nations, uplift participants, and promote peace, these changes were also made at a time when individual political demonstrations at the Games were not particularly prominent. Thus, these changes did not come under intense scrutiny—until the 1968 Olympics in Mexico City.

The 1968 Games occurred at a tumultuous moment in world history. In the aftermath of the Mexican government’s Tlatelolco massacre just ten days before the Olympics began, Brundage gave a speech at the opening ceremonies, stating “we must never permit the Olympic Movement...to be a forum for demonstration of any kind.” Despite these warnings, when John Carlos and Tommie Smith won the bronze and gold medals respectively in the 200 meter dash, they made several protest statements on the podium. Most visibly, they raised their fists, adorned with a black glove for the Black Power salute. In addition, they received their medals without shoes, representing Black poverty. Smith also wore a black scarf around his neck for Black pride and Carlos wore a necklace of beads for those who had been lynched or killed. At a key moment in the US civil rights movement, these athletes used their platform to spotlight the racial injustices at home as well as global apartheid in Rhodesia and South Africa. The repercussions were swift; Carlos and Smith were kicked out of the Olympic village and sent home. The IOC ordered that they be banned from the US team, which the US National Committee did.

Their actions also prompted revisions to the Olympic Charter. In the 1974 Charter, the IOC articulated the “exclusive use of the stadium,” by writing that “no political meetings or demonstrations will be held in the stadium or other sports grounds” during the Games nor the week preceding or following the Games. The Charter even laid out a questionnaire for candidate cities that would potentially host the Olympics, asking whether they can “guarantee that no political meeting or demonstration will take place in the stadium or in the Olympic Village during the Games.” The IOC sought to place the onus on host cities to clamp down on any potential athlete protests.

A year later, the full impact of the 1968 Olympics became evident. In the 1975 Charter, the IOC revised its bylaws to forbid not just political demonstration, but “Every kind of demonstration or propaganda, whether political, religious or racial.” The shift is notable for explicitly mentioning demonstrations targeting racial injustices (although, of course, the IOC used different language). The wording of this prohibition in subsequent decades shifted slightly. For example, in 1991, the language shifted from forbidden to “not permitted.” However, the 1975 Charter is the most direct origin of what we know today as Rule 50 and has its lineage in the protests and upheavals in the late 1960s.

This attempt to clamp down on athletes’ protest is increasingly untenable at a time that has put global sport organizations under more scrutiny for their role in perpetuating racial injustice and global inequities. Shifts have started occurring in other organizations and federations. For example, after a series of activist messages shared by European football players, FIFA President Gianni Infantino stated that such actions “deserve an applause and not a punishment.” In an open letter in support of the Black Lives Matter movement after the murder of George Floyd, Commonwealth Games Federation leadership cautioned the global sport community that “this must be our wake-up call too,” that “the world of sport cannot be an observer,” and that “athlete advocacy and activism humanizes, rather than politicizes, sport.”

Yet the IOC has held onto its Rule 50 with tenacity despite growing pressure, even from within the Olympic Movement, to amend or abolish the rule. For example, as one of the first and arguably one of the most powerful National Olympic and Paralympic Committees, the USOPC followed a recommendation of its athlete-led Team USA Council on Racial & Social Justice in the lead up to Tokyo and announced it will no longer sanction athletes for protesting in support of racial and social justice. The USOPC followed through on this commitment when it backed Saunders’ protest in Tokyo.

Other coalitions, like the athlete advocacy group Global Athlete, have called for the rule to be abolished altogether. On the eve of the opening ceremony for the Tokyo Games, more than 150 athletes, organizations, and experts committed to athlete expression and social justice (including the authors of this piece) signed an open letter asking the IOC and the International Paralympic Committee (IPC). It asked them to refrain from imposing sanctions on athletes protesting at the Tokyo and Beijing Games and commit to amending Rule 50 and Section 2.2 (the IPC’s counterpart to Rule 50). Athleten Deutschland and the World Players Association have pledged to provide athletes with legal support should the IOC attempt to sanction athletes for protesting during the Games.

It remains to be seen how the IOC will respond to future protest once the public spotlight on the Olympic movement during the Games fades. As Dave Zirin and Jules Boykoff attested, Saunders’ epic “act of dissent” is “among the most memorable acts of athlete activism in Olympic history.” Surely, it brings much needed attention to the IOC’s institutional commitment to the rule and systemic silencing of athletes.

Indeed, a showdown between the IOC and advocates for a more athlete-centered approach to global sport governance is all but certain on Rule 50 in what has become one of the most prominent battlegrounds for racial justice and human rights in modern sport.