20 Years of Flawed Assumptions Led to Failure in Afghanistan

Luiza Carter deployed to serve as a Political-Military Advisor in East Afghanistan during 2015-2016, receiving the Medals of Outstanding Civilian Service, Global War on Terrorism and the Non-Article 5 NATO for Service with NATO in Relation to the Resolute Support Mission.  She received an MA in International Security Studies from Columbia University and a BA in Political Science from Pace University after personally witnessing the events of 9/11 in her home of downtown Manhattan.

The views and opinions expressed in this article are those of the author and do not necessarily reflect the official policy or position of any agency of the U.S. government. 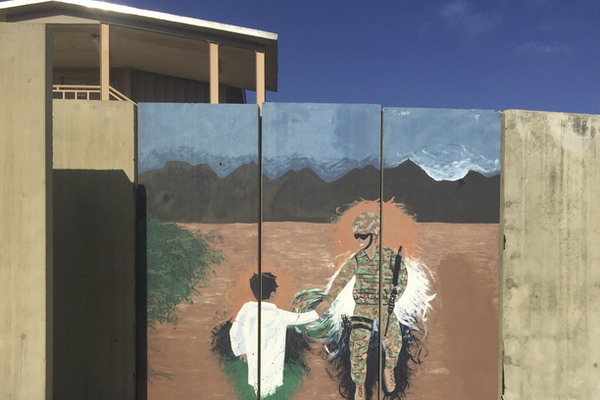 Mural at Bagram Air Base. Photo by author.

“What we are seeing now is truly shocking and shows we missed something fundamental and systemic in our intel, military and diplomatic service over the decades — deeper than a single (horrible) decision. Something at the very core that unraveled 20 years in only days.” In the emotional week following Kabul’s fall to the Taliban, these were the words of a close colleague who spent years advising senior U.S. military and the Afghan government. Countless explanations emerged attributing the well trained and equipped Afghan Army’s loss to a barbaric insurgent militia, citing an antagonistically factional, corrupt, and illiterate army plagued by poor morale, lacking any incentive to keep fighting, and a long-sustained over-reliance on U.S. close-air support. Poor governance by the power-hungry Afghan elites in Kabul, the same ones who consistently ignored military and security reforms, was freshly scrutinized. Finger pointing in the District abounded, identifying intel failures, lack of a conditions-based withdrawal, a consistent strategy, or a military culture unable to admit failure.

After the U.S. dedicated two decades and trillions of dollars to defeat the Taliban, one must ask: why were the world’s superpower’s best efforts and superior military might insufficient? During my time as the Political-Military Advisor to U.S. commanders in Eastern Afghanistan, I witnessed the Taliban’s ability to swiftly defeat the Afghan Army in the provincial capital of Kunduz in 2015. Even then, problems plaguing the Afghan Army, such as high AWOL numbers or “ghost soldiers,” and the Taliban’s capabilities, were evident. But there is much, much more to it than simple metrics.

Recent justifications and excuses fail to consider the central flawed assumption underpinning U.S. efforts from day one: that the majority of Afghans were as opposed to Taliban governance as the Coalition. But local anti-Taliban uprisings are no more indicative of an entire nation’s political leanings than a mob storming the U.S. Capitol. We looked through our Western lens, anticipating the population’s embrace of a new government, believing we would be the liberator of a nation from its fundamentalist oppressors.

The West’s perceptions of Taliban human rights atrocities inflicted on the Afghan population are substantially graver than leading Afghan elders’ perceptions—specifically those Elders who negotiated Jalalabad’s handover, which took place hours before Kabul’s fall and met with minimal resistance. How could this happen? Jalalabad is the 5th largest city in the country and home of the 201st Corps, a top-performing Afghan unit, as well as the home of the Ktah Khas—one of the most elite special forces divisions in the country, consisting of army, police, and intelligence agency units. Just as in 1996, when the Taliban was welcomed as fellow Pashtuns filling a void and quelling the warring warlord factions created by Russia’s departure years prior, now also many cities have quickly surrendered to them. This is largely due to the same deeply rooted, patriarchal, conservative cultural and social conditions remaining throughout the last quarter of a century there.

Ridding Afghanistan of the Taliban is akin to eradicating components of a 1,700 year old “code of life.” For decades, the militant group has been intricately woven into the fibers of society – to include creating shadow governments where the state structure collapsed and facilitating transport of the country’s booming drug trade presided over by provincial leaders and esteemed village Elders. For many Afghans with roots in a culture drastically different than ours, Taliban governance was simply not as barbaric as what we saw through our Western lens. Or at least not worth sacrificing their lives to prevent.

Long before the Taliban emerged, there were tribal policies of gender segregation (purdah), represented by burkah clad women. These policies, considered draconian by the West, dominated the countryside of this patriarchal society. Confined to caring for families and working the fields, women gave little thought to pursuing Parliamentary offices or higher education where interaction with men might occur. Their burkah provides a gender barrier and purdah safeguards honor while ensuring they remain as intended: protected and invisible. While there were variances in severity dependent on region and socio-economic status, the Taliban’s barring of women from schools was not new but an imposition of conservative cultural village norms onto city women in Kabul or Kandahar. This did not suddenly change with the Taliban’s fall in 2001; Afghanistan does not now have an entire generation of educated and liberated women. In reality, only 29% of girls age 15 and older are literate today (compared to 55% of males). Similarly, honor crimes also continued to occur throughout the country over the last two decades; as recently as May of 2020 18-year-old Nazela was murdered after running away with her boyfriend in Badakhshan. As extreme as the militant group’s gender ideology is, it is not the sole source of responsibility for human rights abuses and oppression of women.  Accordingly, opposition to the Taliban based on social repression could never serve as a basis for widespread opposition to its rule.

Like the Taliban, 40% of Afghans are Pashtun, a fiercely independent people long ruled by Pashtunwali. This ancient tribal code and way of life is similar to the strict interpretation of Islamic Law the insurgency promulgates. Their ideology ensured centuries of tribal survival and its custom, or tribal, law dominates the country’s informal justice systems. The Taliban have historically represented a unique blend of Deobandi Islam, Saudi Wahhabism, and tribal Pashtun beliefs and values. The punishments they administer have been present for centuries and, at times under Shari’a, were less brutal than tribal justice of stoning or honor killings. By incorporating their extremist interpretation of Shari’a in conjunction with tribal law policies the rural population had already been accustomed to, the Taliban minimized opposition throughout much of the country.

Following the 2021 Kabul takeover, President Biden accurately stated, “You can’t give them the will to fight.” There are reports of stories half a world away in remote Mexican highland towns like Pantelho in Chiapas Province, where indigenous vigilantes armed with makeshift weapons have been successful in driving out powerful drug cartels terrorizing their communities. In the absence of effective state security forces, advanced weapons, or training, they are only armed with the will to free their communities from militant oppression. Yet the Afghan Army, trained and armed with over 22,000 Humvees, 51,000 tactical vehicles, 600,000 key weapons, and 200 rotary and fixed-wing aircraft, opted to hand over the country. It’s clear that for many in Afghanistan, the Taliban threat was not dire enough to warrant defiance or resistance.

This is not to deny that many Afghans did sacrifice their lives in battle over the years, including those desperately rushing to the Kabul airport attempting to escape feared political retribution. A brilliant commander I served under recently publicly wrote, “I had served with some true Afghan heroes and had too many episodes of Afghan leaders and people who actually were genuine, who didn't want a return of the Taliban. They wanted prosperity for their family and were humble. They were patriots in their own way. I now know and accept that these honorable, noble Afghans were actually very unrepresentative.” Whether these individuals were inspired to fight for their country, their families or a better life, remains unknown. And pockets of historical resistance remain, such as the Panjshir Valley, led by the son of famed Northern Alliance fighter Ahmad Shah Massoud, who continues his father’s legacy against the Taliban. These unfortunately are not the majority of a 332,000 strong military, which was provided with the capability and capacity to win.

We wrongly assumed the majority of the Afghan Army, representative of the Afghan people, was as opposed to the Taliban as we in the West, and especially that a predominantly male army would suddenly fight for freedoms for Afghan women - freedoms many never possessed. We assumed they’d wage war rather than allow rule by an extremist interpretation of a religion they already practice. We assumed their training and capabilities equaled motivation. But no amount of intelligence assets, military strategies, nation building efforts, or financial assistance could force the Afghans to fight for a Western version of peace and prosperity. This is not a U.S. loss, but an Afghan one.