Andrew Rowen is a historical novelist who dramatizes the history of 1492 through the eyes of both Native and European protagonists. His new novel, Columbus and Caonabó: 1493–1498 Retold (coming November 9, 2021), depicts Columbus’s invasion of “Española” on his second voyage and the bitter resistance mounted by its Taíno peoples, led by the chieftain Caonabó. Rowen’s first book, Encounters Unforeseen: 1492 Retold (2017), presents the life stories of Caonabó and other Taíno chieftains side by side with those of Columbus and Queen Isabella and portrays their respective astonishment and objectives as Columbus’s first voyage unfolds. 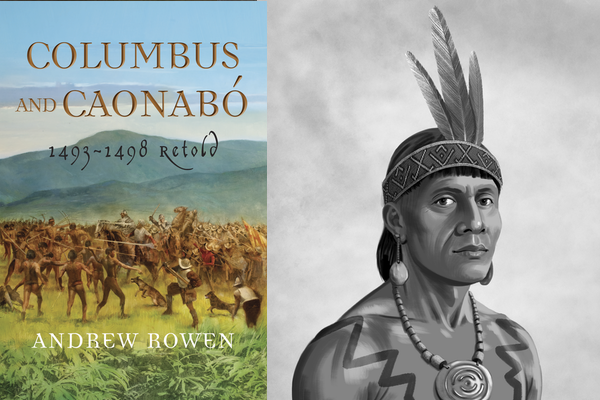 The late Professor James Loewen considered one of the great lies of the traditional “Columbus story” to be that the collision of European and Native American civilizations then commencing was between “civilized” and “primitive” societies. My historical novels attempt to redress that lie by retelling the “Columbus story” from both Native American and European perspectives, through protagonists of equivalent gravity and dignity, each proud of their respective civilization’s traditions, moral beliefs, and religions.

I believe this effort is worthy, most plainly, because many Taíno peoples of “Española” resisted Columbus’s conquest, determining strategies and taking counteractions themselves—analytically, it’s their story, too, not just a “Columbus story,” a “Spanish empire story,” or a “European colonial usurpation/atrocity story.” While often overlooked, Caonabó was the first Native chieftain known to organize war against the European settlement of the Americas that began in Española in 1493 and continued for four centuries. Columbus himself used the following words (translated from Spanish) to describe the chieftain: “the most important chief on the island;” “no one is bolder or more daring in war;” and “all the island’s chiefs watch what he does closely and no longer have any fear, being emboldened by his killing of Christians.” Traditional accounts of Columbus’s voyages and legacy—whether pro- or anti-Columbus—often do not credit Caonabó and the resistance he led, tending to treat the Taínos as passive victims. My new book places Caonabó and Columbus’s plotting, strategies, and actions for their conflict on a par. Caonabó was conquered; but centuries-old history about an event shouldn’t be written only about the conqueror.

Presenting both Taíno and European perspectives of the “Columbus story” also reminds that the Europeans violated not only Taíno sovereignty but the Taíno civilization’s honored ideals, traditions, and sacred beliefs. While fifteenth-century Taínos lacked writing, the weaponry, and many other technologies of fifteenth-century Europeans, the Taínos had religious beliefs and a moral code that were no less true in the eyes of the believer or valid than those of the Europeans they fought. The Scientific Revolution hadn’t arrived on either side of the Atlantic, and religion was central to the perception and moral conduct of both peoples. My new book presents and contrasts tenets and moral prohibitions of Taíno religion and Christianity, also putting them on a par. Dialogues between protagonists push the reader to consider the extent to which the modern ascendancy of European religions in the Americas is simply rooted in conquest, rather than sophistication, validity, or appeal.

The foregoing points may have special significance for those who consider themselves Taíno or with Taíno roots (not myself) or who practice an indigenous or polytheistic religion. Over recent decades, the number of people in the Caribbean, the United States, and elsewhere in the Americas who consider themselves Taíno has grown substantially, and a bicultural retelling of the “Columbus story” provides an ancestral history still often erased or unknown. Caonabó and his wife Anacaona have long been remembered in the Dominican Republic and Haiti, but much less so elsewhere. Chief Guarionex—Caonabó’s peer, renowned for his spirituality—is even lesser known, and his study of Christianity with the second voyage’s missionaries and his rejection of it is typically overlooked in accounts of the effort. Columbus and Caonabó depicts that education and rejection, which might have special meaning for those who’ve made a similar choice.

My books present the actions and thoughts of both European and Taíno protagonists as I believe they would have lived them day-to-day, in the immediacy and chaos of their present moment, without imposing historical conclusions drawn in hindsight or inventing an overarching literary story plot, seeking foremost historical validity. To that end, I have considered the primary accounts written by the conquering Europeans who witnessed the events, knew the participants, or lived in the sixteenth century (to the extent credible) and, as they had no written history, studies of the Taínos by modern anthropologists, archaeologists, and other experts seeking a more bias-free understanding. My research also has included visiting and investigating sites in Haiti, the Dominican Republic, Spain, and other countries where the protagonists lived, met, or fought, which has tested and added to my understanding of the historical record.

I try to speculate and place each protagonist’s thoughts within the context of his or her fifteenth-century perspective and to leave moral judgments for the reader. As for Columbus, scenes in my novels portray those of his qualities often recognized as admirable—perseverance through adversity, rising from a humble origin to nobility, and extraordinary skill as a mariner. But, on behalf of his sovereigns and with papal approval, he violated the sovereignty of Native peoples, and he also enslaved them and men under his command committed atrocities—as I also depict. As for Caonabó, my novels trace his foresight that the Europeans were an enemy and his resolute and brave attempt to organize his people to repel them, all without the experience of the next centuries to guide him.

My first decision was whether to write histories or historical novels, and I chose the latter for two reasons. In my view, I had to write novels because the Taínos had no written history and a novel’s greater speculative latitude was necessary to achieve commensurate dignity and gravitas of the Taíno and European protagonists. Just as important, I wanted to write them as novels so that readers could experience the history through the eyes of protagonists of both peoples, not merely understand events.