A Passport Tells a Story of a Bygone Time

Ron Steinman spent 35 years at NBC. He was NBC’s Bureau Chief in Saigon during the Vietnam War. In 1975 he joined the Today Show, spending 11 years as a senior producer in Washington and New York, including covering politics and overseeing production of the Today Show’s live special weeklong broadcasts from China, Moscow, Seoul, Vietnam and overseas presidential trips. Steinman won a Peabody Award, a National Press Club award, two American Women in Radio & Television Awards, and has five Emmy nominations. 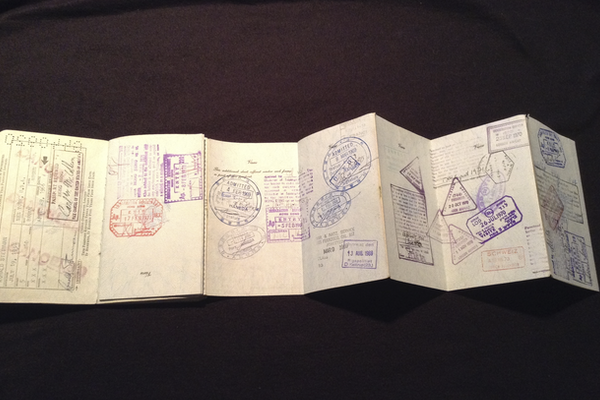 I look at my United States passport, I hold it in my hand and I think of all we have been through together. The trips it has made. The airports it has seen. The countries it has visited.  The many hands that once cradled it. The scrutiny it has undergone from customs officials, immigration officers, police and soldiers. The physical passport I traveled with for many years in the 1960s, 1970s, and 1980s could certainly make a case for unfair physical and mental abuse. The wars and riots my passport, my constant companion when on the road, has seen will never be repeated again. But there we were, always on the road. Always on the road.

Today because of our never-ending plague of COVID-19 and its frequently changing varieties, almost none of what I and others went through applies. All travel is now different. It may never be the same again. This, is how it had been for decades, at least for me.

When I traveled the world for NBC News, I stayed in the best hotels. In Europe and Asia, this was a benefit that came with a caveat. I always had to give up my passport to a clerk behind a desk at the hotel. During the height of the Cold War, no matter the country, I often filled out a form that listed my date and place of birth and, of all things, my mother's maiden name. Obviously, that was a trick question but when I complained, the hotel desk clerk or concierge became deadly serious. "It is necessary," he said. Topping off the questionaire, the same almost everywhere I went, I had to turn in my passport until I departed. "Your passport, please," polite but firm, a request I could not refuse. I looked at my battered friend and I would reluctantly hand it to the uniformed hotel employee, who placed it in a simple brown envelope. He put it into a small safe behind his desk already filled with other passports. Seeing inside the safe made me feel better knowing it was not alone. I suspected, but never knew, if the local police or the secret police, especially when traveling in the Soviet Union or, say Poland, even Austria, Switzerland, or Denmark, took the passport, and photocopied its vital information. The passport served as my ID. Not having it during the story we were covering made me uncomfortable. On departure, my passport again in hand, my uneasiness lifted, I knew it was a small price to pay and one I learned to live with.

It is easy to take one’s passport for granted. Though small and not even as big as a schoolboy’s notebook, it is not wise to think cavalierly about the most important document you carry when traveling. It is not a simple certificate in the commonly accepted term. It defines who you are when you are either working or playing out of the country. It says who you are when you get on and off a plane, in and out of a bus or train, and even when in an automobile driving down a foreign super highway. It is a detailed portrait, including a recent photograph of who you are behind the stamped entry visas that stare at you from a once blank page.

The passport that I used extensively to travel the world for NBC News in the 1960s,1970s and 1980s measures approximately 3 3/4 inches wide and about 6 inches long. My passport was everything in my life. It was the golden key that unlocked most doors to free or not free countries allowing me access into the hearts and minds of people everywhere. If I were pursuing one of my former trades as a news producer today, I would be unable to do my job as easily as I once did when I had this passport. Originally my passport had 18 blank pages and 6 more pages of what the State Department calls "Information for You." It has a drab green cover and two title pages at the front and a page with a recent photo of me. I am young and I look very serious. The embassy in Hong Kong, where I once lived, renewed my passport in April 1966, signed by the Vice Consul of the United States with the printed signature of Dean Rusk, then Secretary of State -- his term covering 1961 through 1968, the Kennedy and Johnson years through the war in Vietnam. Does anyone remember Dean Rusk?

When I went to Saigon, Vietnam as bureau chief for NBC News in early 1966, I had already traveled extensively to Great Britain, France, Italy, Belgium, Luxemburg, Holland, Mexico, Guatemala, Brazil, Haiti and the Dominican Republic. With all the traveling I did, I ran out of blank ages in my passport. The State Department had a good solution. In Hong Kong and London, on my request, each embassy added a set of 12 blank, accordion- style pages to my passport. By the time I retired that relevant booklet of my life, the passport had an additional 70 pages. Over the years, very few of those pages went unstamped.

My passport was something special to me and everyone else I met while traveling. According to a recent Pew poll, America's standing in the world had never been lower than it was in the Trump years. All around the world, confidence in the United States had a precipitous decline.

In a survey of 13 European countries during those years, there had been a steady decline from when America's status was honorable and respected. America's standing in the world, especially in Europe dropped as much as 30 percent during the Trump era. Belgian fell to 9%, Great Britain and Germany hovered around 10% confidence in America under Trump. Under President Biden those numbers should rise to where they once were in those countries that remain our allies. But you never know.

Stepping off a plane or at a roadside checkpoint, getting in a line before entering a different country, and going through customs, showing my American passport, being asked no questions except why are you here and accepting your answer without further questions, and then passing through the gate with a hearty welcome, and sometimes even hearing "good luck," made the trips I took that much more fruitful. It is somewhat better today under Biden than it was under Trump and his hard-right constituents but it is still not what it once was. Suspicion reigns instead of cooperation. Smiles from officials at points of entry are mostly gone. Trust will take time to develop.

Until countries around the world learn to trust America again, the passport one carries will have a lesser value than it once did. It is difficult to polish anything after it loses its luster. Holding my old, battered passport in my hand and looking at its non-descript green color, I am thankful I had it when I needed it most. I know that I will never again have a better companion on the road.