Richard Nixon Made one of the Most Successful Political Comebacks in History. Trump Ignores His Playbook 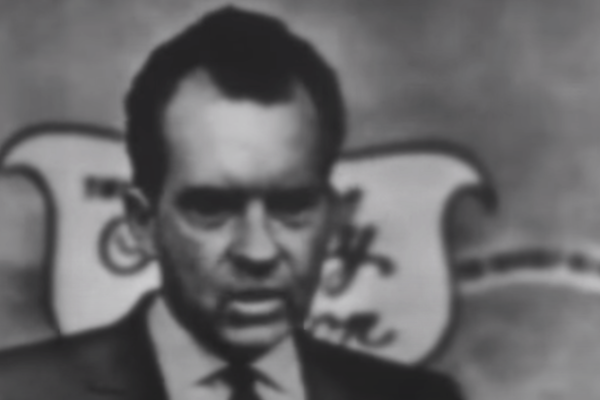 On November 7, 1962, defeated gubernatorial candidate Richard Nixon declared his "last press conference." His election to the presidency six years later is one of the most remarkable comebacks in American politics.

In an informative article recently posted on HNN, Michael A. Genovese compares and contrasts Donald Trump with Grover Cleveland, the only president to serve non-consecutive terms. Trump aspires to go down that same path. However with respect to winning two non-consecutive terms, it is appropriate to compare Trump’s prospects with Richard Nixon’s more recent comeback.

Technically, of course, Nixon did not serve non-consecutive terms. But in a sense he did. When Nixon ran for president in 1960, he had served two terms as vice president. Nixon presented himself to the American people as an experienced incumbent who would continue the Eisenhower policies of a moderately conservative domestic administration and firm leadership of the free world against Communist aggression. After losing the presidential contest in 1960 and the 1962 race for California governor, Nixon set a path leading to the presidency in 1968. Trump completely deviates from the Nixon comeback model as Trump’s political characteristics are far different from Nixon’s and the presidential election process has changed since the 1960s.

Trump’s deviation from Nixon began on election night. Late on election night in 1960 (after midnight in California), Nixon broke the silence in a nationally televised speech saying, “while there are still some results to come in, if the present trend continues, Mr. Kennedy, Senator Kennedy will be the next President of the United States.”

Between midnight and dawn on election night in 2020, Trump spoke several times to supporters at the White House, and his remarks, too, were nationally televised. Trump spoke about winning states such as Michigan and Georgia that he did not win. He said, “We were winning everything and all of a sudden it was just called off." Trump was referring to big city votes counted for Biden late in the evening. By dawn, Trump was calling the election a “fraud on the American public.”

Trump also completely deviated from Nixon during the transition period between the election and the inauguration. Three days after the election, Nixon accepted Kennedy’s invitation to meet in Florida. Kennedy called Nixon “cordial” and “cooperative.”

In that extremely close 1960 election, Kennedy won Illinois by 8,000 votes amid charges of fraud in Mayor Richard Daley’s Chicago. Nixon refused to demand a recount. Nor did he contest the election in court. Nixon would later write in his 1978 memoirs that a recount would have taken a year and a half, an uncertainty that would have been “devastating to American foreign relations.” Furthermore Nixon said that he did not want the label of “sore loser” that would have plagued him through the rest of his political career. On January 6, 1961, Vice President Nixon stated that it was his “honor” to declare that John F. Kennedy has been elected President of the United States and Lyndon Johnson elected Vice President. When Kennedy took the oath of office at his inauguration, Nixon stood behind him.

The Trump to Biden transition was the total opposite. Trump unleashed a plethora of lawsuits challenging election results. Trump pressured the Justice Department to overturn the election. After acting Attorney General Jeffrey Rosen refused to cooperate, Trump tried to replace him with lower-level staffer Jeffrey Clark. That is in addition to Trump’s call to the Georgia Secretary of State to “find votes” and courting of Republican state legislators in Michigan to convince them not to certify electors in that state Biden won by 154,000 votes. Trump promised a “wild” protest, pressured Vice-President Pence not to certify the electoral results, and encouraged the invasion of the Capitol on January 6. Finally, Trump got out of town on the morning of January 20, rather than attend the inauguration.

Trump continues to deviate from Nixon in his attempt to win back the presidency. Nixon, after losing the California governorship became a unifying force in the Republican Party. After giving a supportive speech for the presidential nominee Barry Goldwater, Nixon traveled throughout the country campaigning for the national ticket, which earned the gratitude of the party’s conservative wing. But Nixon also acted as a party unifier, stating a week after the 1964 election, that the party must “make a place for all responsible points of view.” In 1966, Nixon again traveled throughout the country campaigning for any Republican who had the party nomination. In 1968, Nixon appealed to the silent majority who were disgusted by the Vietnam War protesters and the racial riots of the mid-1960s. This Nixon appeal, often called the Southern Strategy, did have racial overtones for whites resenting lawlessness and disorder. But Nixon seemed moderate enough, especially when campaigning in the North, to receive the endorsement of Nelson Rockefeller and other liberal or moderate GOP leaders upon winning the nomination.

In contrast, Trump tries to come back to the presidency by frequent use of the word RINO – Republican in Name Only. In practical terms, this means anyone who does not support Trump’s return to power. Prime examples are the only two Republican members of the House Select Committee investigating January 6. Trump has endorsed Liz Cheney’s primary election opponent although the Wyoming representative has a 96 percent conservative rating from the Heritage Foundation, and Trump sent Adam Kinzinger a vulgar message about what he can do with himself. Trump’s attempt to return to the White House is not about political principles or ideology. Trump has endorsed nine Republican candidates challenging Republican incumbents in 2022 and made numerous other primary election endorsements. Nixon never did that. At a January 30, 2022 rally, Trump pledged to pardon the January 6 rioters if he were reelected in 2024. Unlike Nixon, Trump has no fear of being labeled a “sore loser.”

Nixon left America badly divided, but to achieve the Republican nomination he tried to unite his party and did not expel anyone. In Nixon’s time, the party had conservative, moderate, and liberal wings that he satisfied with his rigorous campaigning every two years. Those leaders determined the nominee. Nixon’s 1968 law and order satisfied conservatives and kept enough of the moderates and liberals to win a close election. Today the Republican Party is thoroughly dominated by conservatives. economically and socially. Trump is satisfied with that, as long as they support him and serve as his loyalists. That right- wing base that includes conspiracy theorists now determines the nomination. Catering to them is Trump’s chosen method to do what Cleveland did and what Nixon in a sense did. Will that divisive path work? It seems tenuous in light of the fact that Trump has lost the popular vote in both of his campaigns. But he is batting .500 at winning the presidency.