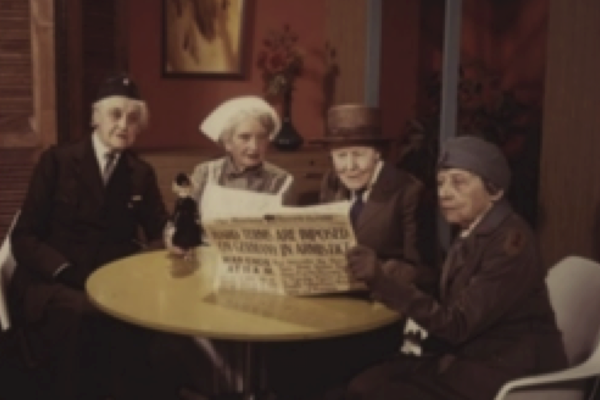 The past several years of domestic debate over the roles and meanings of memorials on the American landscape can be enriched by looking to the example of female commemorators of the past. Today’s conversations tend to focus on statues and other artistic works. By learning about an overlooked cohort of American women who served in World War I, we can find inspiration for creative memorialization projects that will expand our understandings of memorials beyond physical statues and monuments.

In the decades after World War I, American women who served or sacrificed during that conflict championed memorial projects that prioritized community service over statues. Their efforts can provide a blueprint for how to change our approach to memorialization, should we care to look for it. Examining their philosophy can yield the untapped wisdom of a generation of activists, mothers, civic leaders, and unrecognized female veterans.

The women who pursued this unconventional approach to memorialization had contributed to the war effort in a variety of ways. Some had directly supported the military through service in wartime organizations, both at home and abroad. Others had suffered extreme sacrifices. In their number were Gold Star mothers and widows who lost a child or husband. The larger community of female veterans embraced these women as their own and honored them as having served the nation just as much as male veterans.

These women banded together and put service at the center of their commemorative work. They coordinated their efforts through new organizations such as the Women’s Overseas Service League (WOSL), which represented the interests of the thousands of American women who served overseas during the war.[i] Instead of monuments, the WOSL concentrated their memorialization projects on aiding people impacted by the war, whether male or female. They felt obligated to help the male veterans they served during wartime, but they also supported their own community, particularly civilian women excluded from veteran status. [ii]  In the absence of government support for them, the WOSL served as their advocates and benefactors.

Although these projects included no constructed components, the WOSL defined them as memorials. In 1923, WOSL President Louise Wells wrote that in her organization, “there was an overwhelming sentiment to the effect that for the present at least our best memorial to the dead would be our service to the living.”[iii] WOSL members repeated this mantra as they pushed for a radical reinterpretation of memorials focused on service. Instead of spending their limited resources on statues or memorial buildings, they funded what Wells had identified in 1923 as a “more pressing need”: projects to help disabled ex-service women.[iv] For the WOSL, these were the most important memorials they could ever create.

During World War I, gender-based restrictions on military service meant that many American women served as civilians outside of the official armed forces, even when they worked directly for the military, in uniform and under oath. As a result, the government did not consider them to be veterans. They could not receive veterans’ benefits such as medical care, even for illnesses and injuries that stemmed from their wartime service. The WOSL took it upon themselves to aid these women, who included the telephone operators known as the “Hello Girls,” the Reconstruction Aides who worked as physical and occupational therapists, and others.[v] Among numerous initiatives, the WOSL established the Fund for Disabled Overseas Women to provide financial aid to women disqualified from government veterans’ medical benefits.[vi]

Despite only achieving limited success during their lifetime, both in their quest for veteran status and their attempt to change commemorative practices, these women’s experiences provide powerful lessons for today. Their wartime service offers examples of how women supported the armed forces even before they could fully and equally enter all branches of the military. By identifying as veterans, they compel us to question the definition of a veteran and to consider that those who serve outside of the ranks may also be veterans in their own right.

Through their memorialization projects, the unrecognized female veterans of World War I offer alternatives to traditional memorials. They pioneered a selfless form of commemoration that memorialized the past by helping those in the present. What if we also sometimes chose this method? How much time and money would we save if, instead of debating the next memorial on the national mall, we pursued a commemorative service project? How many people could we help if we directed even just a portion of funds for memorials into service projects alongside them? Recently, we have seen how problematic permanent memorials can be. Foregoing them for intangible memorials could save future generations from further culture wars. As the nation grapples with this current reckoning over memorialization, we can learn much from the American women of the World War I generation who prioritized the needs of the living over bronze and stone.