Is it Deja Vu All Over Again with "Appeasing Dictators," or Time for A New Lens? 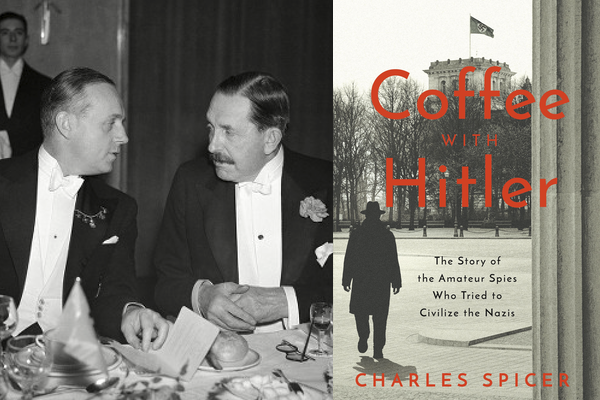 German Ambassador Joachim von Ribbentrop (l) with Lord Mount Temple at a joint dinner of the Anglo-German Fellowship and the Deutsch-Englische Gesellschaft.

An isolationist United States of America has been withdrawing from overseas military commitments. A veteran Democratic president faces unremitting hostility from across the aisle. A vicious and relentless war has broken out in Europe following an unprovoked attack on a youthful democracy by a vain and insecure dictator. Meanwhile, America's once-civil relations with the most powerful country in Asia are worsening as the latter flexes both its economic and military muscles to intimidate its neighbors and rivals. In Britain, the US's awkward ally, the ruling Conservative party agonizes over whether to change its discredited leader, worried that the replacement may be even less reliable than the incumbent.

Such glib comparisons between today’s politics and the 1930s are ever-so-tempting if we substitute Franklin D. Roosevelt, Adolf Hitler, Czechoslovakia, Imperial Japan, China, and Neville Chamberlain for Joe Biden, Vladimir Putin, Ukraine, China, Taiwan and Boris Johnson, respectively. So, it is no surprise that politicians and pundits on both sides of the Atlantic have quickly reached for their Rise of the Nazis primers. Quickly, that loaded term “appeasement” is being bandied about. In February of this year, with Russian tanks massing on the Ukrainian border, British defence minister Ben Wallace cut short his holiday and (to the consternation of his Ukrainian counterpart) suggested there was a “whiff of Munich”, accusing Putin and his generals of “mirroring the tyranny of Adolf Hitler and the Nazis.” In the US Congress, Senator Lindsey Graham announced it was “the 1930s all over again,” while the House Speaker Nancy Pelosi compared Ukraine with the Sudetenland, that German-speaking slice of Czechoslovakia ceded by the Allies to Hitler in return for worthless protestations of peace. Not to be outdone, President Putin has ludicrously evoked his own country’s (very real) sacrifices in its “Great Patriotic War” to justify staining Ukraine’s Jewish president as a “Nazi.” Meanwhile optimistically channelling his wartime predecessor, President Biden signed the Ukraine Democracy Defense Lend-Lease Act of 2022, eight decades after Roosevelt outmaneuvered the isolationists in Congress to provide vital support to the European democracies in their fight against Germany.

By evoking Neville Chamberlain and his infamous slip of paper, these contemporary politicians have joined the long list of post-war politicians who have weaponized appeasement and referenced the rise of the Nazis as a brickbat in international diplomacy to justify military incursions from Suez and Vietnam to Iraq and Afghanistan. But over thirty years ago, at the dawn of the Internet age, an American lawyer and author, Mike Godwin, devised “Godwin’s law.” Put simply, this posits that the longer a debate on any topic (especially on the internet) is sustained, the sooner the chance of a participant referencing Hitler or the Nazis reaches a certainty. As a corollary, he argued that any such reference to the Third Reich ends the discussion.

And so it is with caution that a historian of the thirties should dip his or her toe into modern geopolitics. My recently published book, Coffee with Hitler: The Untold Story of the Amateur Spies Who Tried to Civilize the Nazis, takes a new approach, side stepping the fraught appeasement debate to explore the concept of civilizing dictatorial regimes and their leaders rather than appeasing them. Though a respectable diplomatic strategy prior to 1938, the latter is now so polarising a term as to risk alienating all but the most specialized of history readers. Appeasement, in the sense of one nation making concessions to the demands of another to prevent an escalation of hostilities, is essentially reactive and passive. The civilizing mission of the protagonists in my book – to charm, cultivate and connect with the new regime – was by contrast proactive and dynamic.

By charting Europe’s descent into war from a new perspective, Coffee with Hitler challenges conventional interpretations and popular tropes around British dealings with the Nazis – “Munich, Mosley and the Mitfords” – to tell the astounding and poignant story, for the first time, of a handful of amateur British intelligence agents who wined, dined and befriended the leading National Socialists between the wars. With support from royalty, aristocracy, politicians and businessmen, they hoped to use the much-mythologized Anglo-German Fellowship as a vehicle to civilize the Nazis. A pacifist Welsh historian, a Great War flying ace, and a butterfly-collecting businessman offered the British government better intelligence on the horrifying rise of the Nazis than anyone else.

Clearly both civilizing and appeasing strategies failed then – just as they seem to be failing now. But Coffee with Hitler poses the question as to whether, if we had done a better job of civilizing the Nazis, the second world war might have been avoided or shortened. It concludes that a diplomatic strategy that requires charming people you may neither like nor trust may serve you better than staying isolated on the moral high ground. Trade, commerce and finance between countries should ease cooperation and discourage conflict. Communication with allies is essential. Dictators and other political scoundrels – like small children – respond better to firm boundaries and consistent discipline. Dehumanizing the enemy is rarely helpful. And despite his reputation as a warmonger, Winston Churchill agreed, recognising that “meeting jaw to jaw is better than war”, and echoing his distant cousin John Adams, second President of the United States, who reminded us that “great is the guilt of an unnecessary war.”

Over the last two decades both the US and her European allies have made intermittent and clumsy attempts to civilize both President Putin and the Chinese leadership. As recently as 2015, the British honored President Xi Jinping with a full state visit to the UK – carriage processions, marching bands, a banquet hosted by Her Majesty the Queen, and a 41-gun salute. In 2003, President Putin was the first Russian head of state in 130 years to be similarly welcomed. Following several visits during the Bush era, Putin met President Obama in New York in 2015 but, though much trailed, his promised invitation to the White House from President Trump never materialised.

So, could we have learned from the Thirties and have done a better job? With Russia it seems too late unless internal politics destabilize Putin (as they so nearly did with Hitler). Despite the financial sanctions, the imbalance between Germany’s dependence on Russia’s gas and the willingness of Putin’s citizenry to do without the Golden Arches and iPhones indicates that economic appeasement has failed. But the scale of mutual trade with China is a factor greater and so all seems not yet lost. While Nancy Pelosi’s recent visit to Taiwan has undoubtedly strained Sino-US relations, there are reported plans for President Xi to visit Southeast Asian nations this November, his first international trip in nearly three years, and meet with Biden for their first in-person meeting since the American leader's inauguration.

The echoes of the Thirties in today’s fevered international diplomatic chaos are therefore hard to ignore. And with three nuclear states now at loggerheads, we need to learn any lessons from history to avoid another unnecessary war.