How US Latinos Resurrected the Day of the Dead 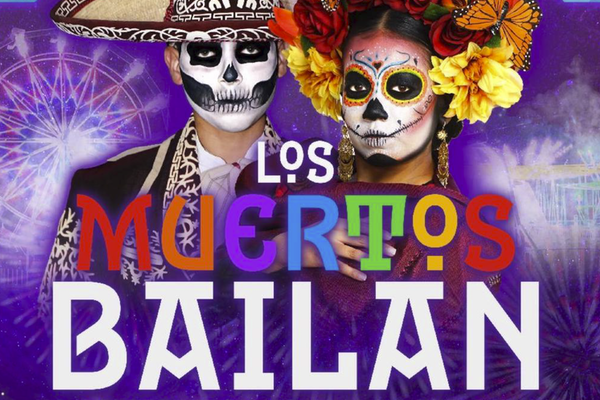 Advertisement of Day of the Dead activities in Edinburg, Texas in the Rio Grande Valley. Image from Museum of South Texas History.

The Mexican/U.S. Latino holiday known as Dia de Los Muertos, or Day of the Dead, falls on November 1 and 2. Today’s broad public celebration of this event hasrelatively recent origins in the United States. We know that for 250 years the Day of the Dead celebrations in Spanish/Mexican Borderland communities were private and modest. Even one hundred years ago, Day of the Dead was a private affair, usually celebrated by faithful families wishing to remember their loved ones. Although the celebration has ancient roots, the cultural tradition is celebrated enthusiastically by thousands today in cities with large Latino populations.

What changed over the past fifty years? This is an account of how Latino artists who saw a need for greater acknowledgement of the departed relatives and their Indigeneous cultural heritage resurrected celebration of Day of The Dead.

Two cities, Los Angeles and San Antonio, offer guidance as to how this celebration evolved in our Latino communities. Los Angeles and San Antonio have witnessed the rise of Day of the Dead celebrations in both cities. Before the mid 1970s, Day of the Dead had little public meaning for U.S. born Latinos. Latino families may have created small altars in their homes or may have gone to the cemetery to tend to burial sites of friends and relatives on these days. Most cemeteries devote little time and resources to older grave sites, so Day of the Dead provided opportunities for families to honor their departed loved ones by leaving offerings and remembrances at the grave site and perhaps constructing a small altar at home to recognize the memories of those deceased. 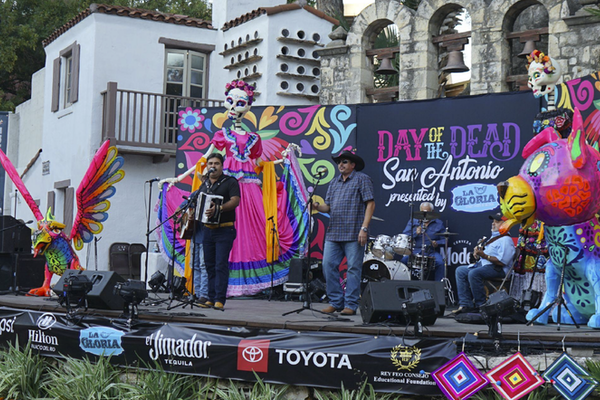 A conjunto band at the Arneson River Theater at La Villita in San Antonio celebrating Day of the Dead. Event sponsored by Chef Johnny Hernandez of La Gloria. Photo by Ricardo Romo 10/30/21

On the Day of the Dead, family members and friends celebrated with ofrendas (offerings) of special foods such as pan de muerto or atole [corn cereal]. On those celebratory two days, the dead were thought to be awakened from their eternal sleep by the presence of guests and the scent of favorite foods and flowers. Music, dance, and candles also contributed to the awakenings.

Several years ago before the release of Coco, Disney’s popular film on this topic, a James Bond movie, Spectre, opened with an elaborate Day of the Dead parade through downtown Mexico City. Mexico City officials decided that the celebration of Day of the Dead with a parade was indeed a good idea. Oscar Lopez, a journalist with the New York Times, noted on October 30, 2021, “The parade has since become an important tourist attraction for the capital, with 2.6 million attending in 2019.”

For the first few hundred years, Day of the Dead in San Antonio was a small and private celebration. On those special days, families with Mexican heritage went to San Fernando Cemetery #2 on Castroville Road with flowers for the deceased. Mexican Americans did not spend the night and many were unfamiliar with ofrendas. A good explanation for this phenomena is provided by Los Angeles Times writer Fidel Martinez. In a recent essay on this topic, Martinez recalled: “Like many Mexican American families, we held on to some Mexican holiday traditions — tamales at Christmas, buñuelos at New Year’s...But Día de Muertos? Not in our house. I think we were too assimilated — too citified in the L.A. suburbs — to appreciate the Indigenous worldview that accompanies the day.” That may explain the late appreciation of this tradition in the United States.

U.S. Latinos’ first introduction to Dia de Los Muertos occurred in the early 1970s as they began to cultivate an interest in Mexican and Chicano art. Aztec art and artifacts suggest that Nahuatl-speaking ancestors may have practiced celebrations of the dead in the centuries before migrating to the interior of Mexico where they founded the Aztec capital. The Spanish conquistadors who arrived in the Aztec capital in 1519 found evidence of art and sculptures demonstrating that the Aztecs believed in the underworld and that ancestral gods ruled in that world.

Mexican art, which gained popularity in the U.S. in the 1970s, provided Latinos with the ideal visual interpretation of what Day of the Dead meant to the Aztec people. The great Mexican illustrator and lithographer Guadalupe Posada [1852-1913] is credited with the popularization of imagery once employed by the Aztecs to convey deceased persons. His drawings of calacas and calaveras [skulls and skeletons] were popularized in the penny press and later incorporated into murals by the acclaimed Mexican painter Diego Rivera.

One of the oldest and largest U.S. Day of the Dead celebrations is held in East Los Angeles, sponsored by Self Help Graphics, a community art organization. Sister Karen Boccalero, a Catholic nun who started Self Help Graphics, loved printmaking, but was receptive to new ideas. Many of the young artists who came to learn about art and printmaking at Self Help had been born in Mexico, and they introduced Mexican imagery associated with Day of the Dead to the art center and indirectly to East Los Angeles. Before the celebration of Day of the Dead events at the Self Help art complex, East L.A. residents knew little of the colorful ceremonies associated with this special tradition.

Los Angeles Latino artists organized the first festival of Day of the Dead 49 years ago. Initially, the festival at Self Help consisted of a large outdoor gathering with street closings. Sister Karen’s support of the introduction of Day of the Dead activities led to the event’s rise as a signature event of the non-profit organization. The following year the ‘Muertitos” organized a parade. Over the past few years this event has been known to attract more than 10,000 participants. This year’s celebration will be held on Saturday, November 5th (Information about their events can be found at the Self Help Graphics’ website).

Although over the years the Aztec celebration has become more recognized and appreciated for its connections with deceased loved ones, the tradition has experienced transformations with the advent of the digital age. As social media introduced this Indigeneous celebration to global audiences, more U.S. cities with large Latino populations have added Day of the Dead celebrations to their annual cultural events calendars. Local community groups incorporate adaptations of this cultural legacy to reflect links to Indigeneous roots as well as contemporary experiences. The regeneration of this Day of the Dead celebration has brought growing attention to the deep and rich heritage of Latino culture in the United States.