Thomas W. Zeiler is currently a U.S. Diplomatic Historian at the University of Colorado: Boulder and editor of "Diplomatic History," the field's journal of record. He has written several works, including his most recent, Ambassadors in Pinstripes: The Spalding World Baseball Tour and the American Empire. 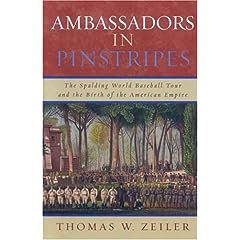 We in the field of American diplomatic history (U.S. foreign relations) beat ourselves up about our supposed irrelevance to the historical profession. Some ignore the situation but others seek remedies by engaging other fields. I half joke that there is a three-step program to validating the field that has become as boring as it is reflective of the dourness among some of us.

Here’s the routine. First, a young scholar indicts “traditional” approaches for their narrow focus on elite government actors and then cites parochial, America-centered archival research that forsakes current internationalizing trends. This is also the place for an obligatory reference to Charles Maier, who warned in 1980 of diplomatic history’s looming obsolescence as social history rose in prominence. Step two proclaims the very dark age he predicted, which then blackened even more as the cultural turn took root. The field became a dinosaur, continues our guide. Now the scholar turns to mourning the demise of political history and adds in grievances that departments are not hiring enough diplomatic historians and major journals are shutting us out. But salvation is at hand. The third step shows how an advance guard has refreshingly deviated from their outmoded ancestors. Be vigilant, however, for although progress in making us more relevant has been made, there is no time for rest. Continue the self-flagellation (a term often used by diplomatic historians) and issue warnings that the field must stay the course of renewal or be cast in the dustbin of history. The task of justification is now complete.

Is anybody listening? Despite the fact that there are examples galore that the study of American foreign relations has been refashioned in ways consistent with the rest of the profession, and really leads in many ways in the internationalization of American history, we still suffer through a declining job market, blank stares from colleagues, and the loss of graduate students to sexier fields deemed our polar opposites. Patricia Cohen’s recent article in the New York Times of June 11 pointed to the fade-out of courses in traditional historical fields like U.S. foreign relations (I could add intellectual, economic, constitutional, labor, etc.). Yet ever so steadily, the field has been altered. Diplomatic historians have forged ahead with research that is vital to historical knowledge, including well-known work on the state and newer transnational and cultural studies. Understanding power is still central to our field but new and old methodologies now vie in analyses of who wields influence and to what ends. Jobs are available under new names such as U.S. in the world. All is not rosy, of course. But luckily positioned as I am as an editor of Diplomatic History (the field’s journal of record), editor of the bibliographical American Foreign Relations Since 1600: A Guide to the Literature, and having surveyed the field in the Journal of American History last March, I see more positives than negatives.

Witness the recent annual conference of the Society for Historians of American Foreign Relations (SHAFR), a well-endowed organization numbering over 1,400 members from 34 nations, at which over 500 people from 19 countries attended. Nearly a third of the presenters were first-timers to SHAFR; this reflects an effort to attract those who don’t naturally drift into the orbit of diplomatic history. Attendees actually complained that the agenda of 80+ panels of approximately three papers each was so busy that they were frustrated by not being able to hear every presentation of interest. The SHAFR meeting is not as big as, say, the American Studies Association conference, but it can also be argued that ASA does not focus solely on international affairs or history as we do, and has the advantage of trendiness to boot.

Somebody better tell SHAFR that diplomatic history is in a state of demise! Relative decline was inevitable as the revolution of social history took great shares of the graduate student base. But we are experiencing a groundswell of support that seeks out a larger community of scholars interested in every aspect of U.S. foreign relations. For starters, the very identity of diplomatic history has been at issue. A panel at the SHAFR meeting to rename the organization drew well over two hundred audience members of all ages and ranks. In fact, this field has fast become ever more pluralistic (although it always was!) in welcoming new ideas, methods, and topics. The name-change issue is just one example: the goal is not to be more hip but to attract a wider range of scholars, topics, and methods that will further enrich the field as well as the profession as a whole. Other examples of transformation and relevance abounded in the conference sessions where historians of borderlands, empire, and ethnic studies mingled with diplomatic historians. It was hard sometimes to tell them all apart! Taking a look at papers given at the conference reveals the inclusive change underway. Cultural and international history, for example, are abundantly evident in these paper titles: The 1939 Love-Watson Murder Case: Violence, Gender, and Identity Conflict in World War II Panama; Why Did the American Effort to Transform Classical Music Life Fail?; Celestine Smith and the YWCA in Nigeria, 1930-1939; The 1987 HIV Travel/Immigration Ban; and America’s Jews versus Russia’s Tsars.

SHAFR drives to reach out beyond the traditionalists. Diplomatic historians take this position in part to salvage their position in the historical profession but mainly because they understand that American foreign relations is diverse, expansive, and inclusive of a variety of issues and ways of looking at history. We have long realized (and learned the hard way through alienation!) that we don’t live in a vacuum within the study of history. At risk of sounding Panglossian, I believe the reform movement more reflects new realities. The field is moving in many directions while many of its practitioners also laudably stick to the road of traditional security studies. We look forward to you joining us, and us meeting you, as the evolution of U.S. diplomatic history continues.

You write, "But the issue for many of us is not academic turf-protection or cultural-history expansionism. The issue is the necessity, especially in today's world, of teaching students about interstate relations and about the nature of power."

Good point. When you look at how many U.S. citizens look at foreign policy issues, and many domestic issues, you get a sense that some of them haven't given much thought to the intricacies of power relationships or how the levers of power work in Washington. Simply to improve civic knowledge in the U.S., I'd like to see more emphasis on political and diplomatic history in college level classrooms. It might help cut down on the people who read or view news stories without much background in which to judge them.

The move away from traditional history coincided with cutbacks in foreign coverage by broadcast media. Tom Fenton offers an interesting look at this in his book, _Bad News: The Decline of Reporting, the Business of News, and the Danger to Us All_. He examines a number of factors that have affected reporting of international events. One is cost. Instead of having journalists stationed in different parts of the world where they become deeply immersed in the local culture and issues, networks increasingly rely on third parties and free lancers. Remember the days when Peter Jennings reported from ABC News' London bureau? Long gone.

Of course, fewer and fewer people turn to the broadcast networks for news. Many turn to the Internet, where bloggers repurpose reporting from traditional print outlets. But those outlets too are shrinking. The Baltimore Sun once had a robust international section which covered events in the USSSR and Europe very effectively. Now, that newspaper is a shadow of its former self.

Tom, this is a fine article, but you do too much apologizing. There are numerous ways to conceive of foreign relations, and "international history" that provides multi-national perspectives is a good thing.

But I perceive a bottom line that I wish you had pushed harder: Relations between national states are terribly important. When they go wrong, wars and other bad things happen. Of course, such stories involve more than "clerks" writing notes to each other, but diplomatic historians have known that for many years.