How Does Obama's Personality Stack Up Against FDR's?

Andrew M. Obritsch received his B.A. from St. John's University in Collegeville, MN, in 2011. He is currently a graduate student in clinical psychology at Eastern Illinois University. 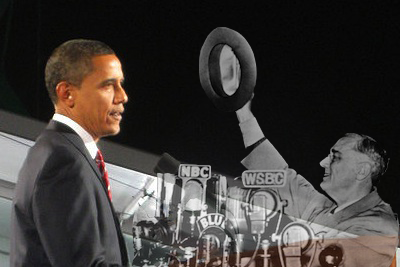 In today’s society, it is common to anoint “the next.” The media has been searching for years to find the “next” Elvis Presley and the “next” Michael Jordan. One such comparison that has arisen in the last few years is the comparison of Barack Obama to Franklin D. Roosevelt.

One does not have to look far to find similarities between Roosevelt and Obama. Both dealt with severe economic hardship that plagued the United States just prior to and during the presidency of both men. In 1933, the United States was in the midst of the Great Depression, the worst economic depression in our nation’s history. Thomas R Dye’s Obama: Year One (co-authored with seven other writers), states that at the time of Roosevelt’s election, the unemployment rate in the United States was 33 percent and manufacturing was roughly 40 percent of what it had been in the mid-1920s. To fast forward seventy-five years, the economic collapse that occurred in 2008–2009 was by all accounts the worst since the Great Depression. Between November 2008 and April 2009 approximately 645,000 Americans lost their jobs each month. One in three of the 10 percent of unemployed Americans had been without a job for more than 27 weeks, a record for the post-World War II United States.

To delve deeper into this comparison, I conducted personality profiles of Obama and Roosevelt using a technique developed by my co-researcher, Aubrey Immelman, a professor in the psychology department at the College of St. Benedict/St. John's University in Minnesota (and who is, incidentally, running for Congress as an independent against Michelle Bachmann). He developed a technique based on the work of renowned psychologist Theodore Millon, in which it is possible to assess the personalities of persons that would not be able to take the Minnesota Multiphasic Personality Inventory-2 (MMPI-2) or the Millon Clinical Multiaxial Inventory (MCMI). The method -- called the Millon Inventory of Diagnostic Criteria (MIDC) -- consists of 12 scales that correspond to the major personality patterns posited by Millon, which are consistent with the syndromes described on Axis II of the fourth edition of the Diagnostic and Statistical Manual of Mental Disorders (DSM–IV) of the American Psychiatric Association.

The diagnostic procedure is a three-part process consisting of an analysis phase during which source materials are reviewed and analyzed to extract and code diagnostically relevant content. Second, a synthesis phase during which the data gathered in the analysis phase is sorted and categorized into the 12 scales. Finally, in the evaluation phase, the categorized data is interpreted using theoretically grounded descriptions, explanations, and inferences. Then, predictions are extrapolated from Millon’s theory of personality based on the personality profile constructed in phase two.

Ambitiousness was the second most prominent trait for both presidents (Roosevelt, 12; Obama, 10). Individuals scoring in this range on the Ambitious scale are confident, socially poised, and have assertive personalities. Slightly exaggerated Ambitious features (as in the cases of Roosevelt and Obama) occur in personalities that are sometimes perceived as self-promoting, overconfident, or arrogant.

Roosevelt and Obama scored noticeably different on two scales: Dominant and Retiring. On the Dominant scale, Roosevelt scored 19 compared to Obama’s score of 1. The Dominant scale is a measure of an individual’s interpersonal dominance. A high score on this scale would be indicative of a strong-willed, commanding, and assertive individual. In the case of an individual such as Roosevelt -- who has slightly exaggerated Dominant features -- would additionally have tendencies to be forceful, intimidating, and even controlling at times.

Roosevelt and Obama also differ on the Retiring scale. On this scale, Obama garnered a score of 7, whereas Roosevelt received a score of zero. Scoring similarly to Obama on this scale would denote an individual best described as self-contained, reserved, and at times preferring to be in solitude as opposed to being around others. The more solitary and ascetic approach Obama took while in college can be contrasted with Roosevelt’s bustling social life. Roosevelt’s lively social life was part of the reason he was absent from class 73 times in his first year at Columbia Law School. Based on Obama’s profile, missing such a number of classes would have been unthinkable at that point in his life.

The presidencies of Franklin D. Roosevelt and Barack Obama logically draw comparisons. Statistically, the recent economic struggles of the United States are indeed the worst since the Great Depression. However, the economic struggles faced by our country during the Great Depression were exponentially worse than those faced in recent years. Though Roosevelt and Obama share two of their top three personality characteristics and presided over similar economic dilemmas, the severity and general nature of those problems was, and remains, indubitably different. For this reason, an overarching comparison between Roosevelt and Obama would be inappropriate. It is this author’s opinion that Barack Obama is not the next the “next” FDR. Rather, Barack Obama is the “first” Barack Obama.