What About All the Thousands of Other Kids Killed with Guns?

Susan J. Pearson is associate professor of history at Northwestern University and the author of "The Rights of the Defenseless: Protecting Animals and Children in Gilded Age America." Blain Roberts is assistant professor of history at California State University, Fresno, and the author of the forthcoming book "Pretty Women: Female Beauty in the Jim Crow and Civil Rights South." 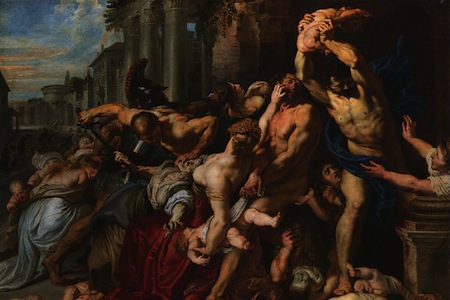 The mass shootings in Newtown have affected us in a way that previous massacres in Aurora, Tucson, even Columbine, have not. Especially in the hours and days after the new broke, Americans responded in emotional, even visceral, terms. We spoke of aching hearts, sickened stomachs, and tightened throats.

Everyone knows the answer: because twenty of the victims were children.

"It's hard to believe that someone would kill children, innocent children," the grandmother of Charlotte Bacon, gunned down by Adam Lanza at age 6, told a CNN affiliate.

The innocence of the victims conditioned our reaction as a nation, prompting an unprecedented conversation on the place of guns in American society. Within the span of one week, a serious debate about gun control had begun, fifty-two percent of Americans had declared support for major restrictions or an outright ban on gun ownership, and President Obama -- who has now witnessed four mass shootings during his tenure in office -- committed, for the first time, to proposing new gun control legislation. It even spurred absurd proposals, like the NRA’s plan to put “a good guy with a gun” in every school. Here on the History News Network, Ira Chernus of the University of Colorado at Boulder recently speculated that the Newtown shootings may be gun control’s Uncle Tom’s Cabin, hastening a ban on firearms in the same way that Harriett Beecher Stowe’s novel helped precipitate the demise of slavery.

The Newtown massacre struck a nerve because it represented an especially heinous violation of childhood innocence. The victims were first graders living in an “idyllic” and “quiet” suburban town, as the press called it. They were not worldly teenagers at college. They were not inner-city gang members. They were not Batman fanboys out for a midnight showing. Age, place, even race -- the vast majority of the children shot by Lanza, after all, were white -- combined to imbue these victims with a special status.

We do not engage in such handwringing when, every year, more than eight thousand Americans die from homicidal gunfire. We pay little mind to the more than one hundred thousand children and teens killed since 1979—enough, according to the Children’s Defense Fund, to fill 4,655 public school classrooms of 25 students each. We certainly do not register much anger over the disproportionate number of gun deaths among African-Americans, child or adult. Forty-five percent of children killed by guns in 2008 and 2009 were black, even though African Americans make up just 15 percent of the child population.

On one level, it seems perfectly natural to be more horrified by the events in Newtown. But, now that we are a few weeks removed from the tragedy, it seems worth asking: is it? In fact, childhood innocence is historically constructed, and our choice to mobilize around it tells us something about the scope of our political imagination.

Children have not always been seen this way. Modern ideas about childhood -- that it is a time of innocence free from the burdens of adult responsibilities -- are a product of the mid-nineteenth century middle class.

Beginning in the nineteenth-century, white, middle-class families started having fewer children, removing them from the labor force, and extending their schooling. They began to view them in emotional, not economic, terms. These changes were undergirded by new religious views. Earlier generations, who had subscribed to the doctrine of original sin, believed that the task of childrearing was to break the child’s will in order to bend him toward God. But the rise of liberal Protestant religious doctrines that stressed a loving, even maternal, God, universal salvation, and gentle conversion affected popular ideas about children and childrearing.

At their most extreme, liberal Protestants imagined children as uncorrupted angels, closer to God and true religion than their parents. In her 1844 advice manual, The Mother’s Book, popular author Lydia Maria Child expressed this position, reminding her readers that “children come to us from heaven, their little souls full of innocence and peace.”

This is the conception of childhood we have inherited, and it is not without value. It compels us to place prohibitions on child labor, to provide children access to healthcare, and, more generally, to ensure that our young enjoy a period of happiness before graduating to adulthood, with all of its attendant worries and anxieties. It can even bring down an icon, as evidenced by the swift fall of Joe Paterno. Perhaps the weight we place on innocence may prove the turning point in the gun control debate.

Yet our reliance on childhood innocence has distinct disadvantages, too. Once Americans reach the point at which they are no longer presumed innocent -- or if, by virtue of their race, class, or neighborhood, we never ascribed them innocence in the first place -- then we are less motivated to act on their behalf. We are more likely to conclude that they are unworthy of protection.

In the end, the Newtown massacre may finally prompt us to confront the proliferation of guns in the U.S. But it also reveals the limits of our political will: does it take the shooting of young children to convince us that guns are a danger to us all?

This time things feel different. But they shouldn’t, for wherever and whoever we are now, we were all once children, too.