Mr. Cohn is the author of "Sick: The Untold Story of America's Health Care Crisis -- and the People Who Pay the Price (HarperCollins), from which this article is excerpted.

Up through the late 1940s, the debate over how to pay for medical care in this country really didn't treat retirees as a separate group. But that changed after Truman's failed bid to establish national health insurance, when politics -- and the evolution of private health insurance -- forced the "special problem of the elderly" onto center stage. By that time, enrollment in private insurance had expanded to most of the working-age population, primarily through job-based coverage. Indeed, widespread satisfaction with those arrangements had been a major reason Truman's bid failed. But the elderly were not sharing in this progress, at least not fully. Most commercial insurers wouldn't allow beneficiaries to keep coverage when they retired from their jobs, particularly if they were past the age of sixty-five. Nor would they sell seniors insurance directly, since the elderly -- almost by definition -- were precisely the kind of high medical risks insurers tried to avoid. As a result, just 40 percent of seniors had health insurance by 1957. The figures improved in the next few years, as the insurance industry, in an apparent effort to prove that government intervention was unnecessary, aggressively offered coverage to more seniors. But even though two-thirds of the elderly would eventually get some form of insurance, the coverage was frequently thin, with exclusions or high cost sharing for any preexisting coverage. Overall, by 1961 insurance was covering about 7 percent of elderly people's total medical bills. 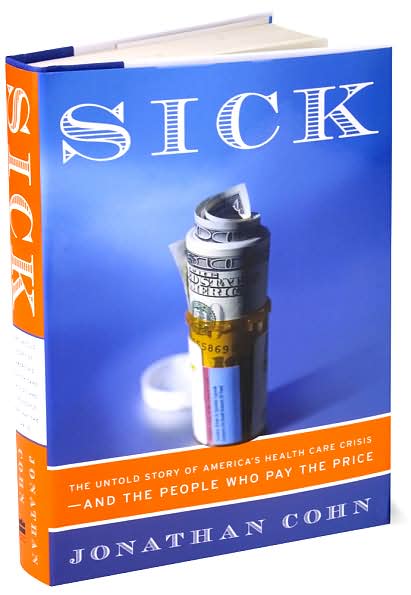 In Washington, the frustrated proponents of national health insurance and health care reform hadn't given up. But they had made a strategic decision to move toward their goal incrementally. And the elderly were an obvious place to start. As the political scientist and historian of Medicare Theodore Marmor has noted, "The aged could be presumed to be both needy and deserving because, through no fault of their own, they had lower earning capacity and higher medical expenses than any other age group." Reformers bided their time during President Dwight Eisenhower's terms, using Congress to hold hearings publicizing the plight of the elderly. In the 1960s, political momentum finally seemed to swing the reformers' way when John Kennedy promised guaranteed health coverage for the elderly -- "Medicare," he called it -- as a central tenet of his domestic agenda. Lyndon Johnson's succession to the presidency after Kennedy's assassination, along with the large Democratic congressional majority he helped to construct in the 1964 election, made passage of a program seem even more likely.

But the architects of the Medicare proposal, many of them veterans of Truman's failed campaign, feared that powerful interest groups opposed to government intervention in health care might yet defeat the measure. So they set out to co-opt such groups. To quiet the American Medical Association, Medicare Part B would pay doctors their "usual and customary fee[s]" as long as they were "reasonable." (Initially, there was no Part B -- the program wasn't even going to cover physicians' services at all.) To ease the hospitals' worries, Medicare would deputize independent, private intermediaries to handle the actual administration of payments -- a job only Blue Cross, which remained close to the hospital industry, was equipped to perform. In addition, Medicare would cover just key services like hospitalization, and only within certain limits. (Hospital coverage would be restricted to sixty days per episode.) This guaranteed a market for private supplemental insurance, while freeing the insurers from any pressure to provide basic coverage for the elderly with serious medical conditions -- a task that, internally, many had long since decided they could not do profitably. Although the doctors never backed down, the insurers never fought hard. The hospitals, as desperate to alleviate their charity care as they had been in the 1930s, actually embraced the proposal giving it enough support that it became law in 1965.

Johnson signed the law in 1965, with an aging Harry Truman at his side, and it was an instant hit with beneficiaries. Soon there was a huge increase in the use of medical services -- as well as a substantial decrease in poverty among the elderly (although that also reflected increased Social Security payments enacted at the same time). Medicare also poured money into the health care sector, fueling a boom in hospital construction and research. But as the era of liberalism that had stretched from Franklin Roosevelt to Lyndon Johnson was ending, Medicare became an object of controversy because of its price tag, which was quickly exceeding projections. Partly, this reflected the success of the program in bringing seniors into the mainstream of American medicine. But partly it reflected the fact that concessions to the industry had given doctors and hospitals enormous freedom to raise fees -- even beyond levels that seemed "reasonable."

Eventually the cost of Medicare became so big that even some of Washington's most famously antiregulatory conservatives agreed to have the federal government become much more aggressive about dictating payments to doctors and hospitals. In the 1980s, the Reagan administration and the Democratic Congress quietly agreed to introduce a new hospital payment system based on diagnosis, not on services rendered, in an effort to force hospitals to adopt more cost conscious treatments. Uniform fees for physicians followed shortly thereafter, thereby fulfilling the fears of the old hands at AMA who swore the government would turn to price-setting sooner or later.

These reforms succeeded in their primary goal: containing the cost of Medicare. Although the program continued to get more expensive, thanks to a gradually aging population and the spread of expensive medical technology (which, of course, kept seniors alive longer, thus perpetuating the spending cycle), by the late 1990s Medicare had shown that it could hold down medical costs just as well as private insurance could -- maybe even better. But the emphasis on cost control had another impact on seniors: it fostered what the political scientist Jonathan Oberlander has called a "negative consensus" in Washington that stopped the natural evolution of Medicare.

In the 1970s, the standard private insurance policies for working age Americans expanded to cover new services, such as prescription drugs and outpatient services, that were becoming more essential, particularly for the treatment of the chronic diseases that seniors were likely to have. But Medicare's benefits didn't keep up, exposing seniors to more out-of-pocket expenses. In fact, with the exception of adding dialysis coverage, which was something of a political fluke, serious expansion occurred only once -- and only in a botched way that virtually guaranteed its failure.

That instance came in 1988, when Congress passed and Reagan signed a law establishing Medicare's first "catastrophic benefit" package. The law extended hospital coverage past sixty days and limited total out-of-pocket expenses for seniors, all while subsidizing a modest portion of prescription drugs and other expenses. The gaps the law filled were real; this is one reason the program passed with such large bipartisan support. But very few seniors ever reached Medicare's catastrophic hospital limit anyway, so few found this particular service by far the new law's most important and expensive feature -- valuable. Meanwhile, because the government had decided that seniors would have to pay for the new program on their own, with no direct subsidy from the government, it had a substantial premium that was based on income. Had the program been voluntary, it's likely that relatively few people would have enrolled. Instead, it was mandatory -- and, ultimately, quite unpopular. In a scene that was one part Nightline and one part Saturday Night Live, a mob of angry seniors in Chicago chased a frazzled Dan Rostenkowski, a veteran Democratic congressman, into his car. A year later, Congress took the law off the books.

Repeating falsehoods may lead to their acceptance by the unthinking, but it doesn't make them true.

Medicare, Medicaid, and the Veterans Health Administration are performing far better than the private portions of America's health-care delivery system. Any valid study demonstrates this conclusively.

Repeating that the Clinton health proposals--which involved mandated private insurance--were "socialism" is simply ignorant (unless it's willfully duplicitous). One may as well pass on the urban legend of hordes of Canadians who flood the US seeking our fine health care--even though it isn't true. Canadians have no health insurance and certainly could not pay our astronomical prices. Moreover, their aggregate health outcomes generally are far better than ours. Again, scholarly studies (if not Fox News or radio talk shows) demonstrate this clearly.

Ms. Loveless, dream if you must that they care about our medical care, they are a business and their purpose is to enrich themselves and their partners. They came out strong for Hillary Clinton's socialized medical plan in 1993 but it was so radical that not even politicians could stomach it. I can't believe that anyone with any sense could believe that government is the answer when Medicare, Medicaid and even the VA are in dismal straits. And you want more of that?

It makes me so sick how the government and privatized health insurers have really messed up healthcare for everyone in this country, and the situation is not getting bettered. It's hard enough to pay premiums on a limited budget, let alone try to deal with all of the changes and cuts that they keep making. It's getting ridiculous. AARP just put up this site called www.thisissoridiculous.com, which hosts a petition and ways to contact your congressman to get our voices heard on these healthcare issues. I am working to support this with them because I think it's something that we need to step up and change before it's too late.

I thought some more about this, the doomsday seers apparently want us to believe that we are in the throes of disasters like the black plague or the flu epidemics of the early 20th century. We aren't and a few reports of illnesses and injuries don't an epidemic make. There are daily advances in medicine and the majority are made in the private sector, we do not need a nanny government to lead us out of the greatest care in history in order that treacherous politicians can be elected.

Will someone forward this to Hillary Clinton so she might get an idea of the cost involved in her socialist medical care, not that it would have any meaning for her, of course. She proposes and promises this to win the votes of the rabble who demand more of everything government paid, it's not the "poor who are always with us", but the rabble who cravenly demand a free ride who are always with us. She doesn't care one whit about the poor or the rabble, she is interested only in money and power, it's time for the taxpayers to repudiate her. Most politicians are thieves but she is a master thief, smiling the liar's smile while picking our pocket.