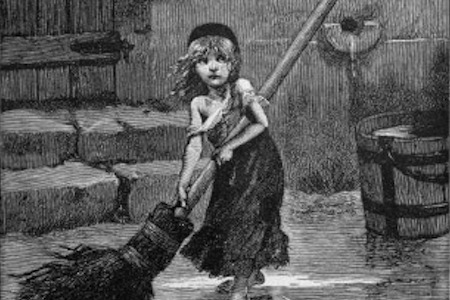 Illustration from an 1886 edition of Les Misérables. Credit: Wiki Commons.

To the barricades! Les Misérables is back again, this time on the movie screen.

Victor Hugo's Les Misérables is a thrilling, violent, enthralling historical story about men and women caught up in a failed political uprising that swept through France in 1832. The original novel, published in 1862, took the world by storm.

This latest Les Misérables -- which has earned a tremendous amount of money in the three weeks since it premiered and last week was nominated for eight Oscars, including Best Picture -- has somehow turned into a debate on whether singing the music live is better or worse than the standard recorded music and whether Hugh Jackman and Anne Hathaway look properly movie star-ish in the close-ups that are used throughout the movie. One critic sneered that Hathaway, who plays Fantine, can’t sing and another howled that she looks anorexic. A third was ecstatic because Hathaway died off at the forty-third-minute mark.

Something is wrong here. I remember the play vividly and was stirred by its luscious and bombastic history, especially the scenes on the massive barricades. The stirring music, with tunes such as "One Day More," makes the play lovable, but the history makes it memorable.

So which is better: the movie or the play?

Plays have a material advantage over movies in that they are live and the emotions in it, whether fury or happiness, are raw (and theatrical acting does tend to do bombast better, anyway). There's an immediacy to the theater, given the physical presence of the actors -- and in certain musicals, the orchestra. Films can't replicate the unique textures of the theater.

But films, of course, offer their own unique advantages -- breathtaking cinematography, location shooting, more spectacular special effects, etc. Films also give stories a sense of pace and timing that cannot be replicated in the theater. All of these features are particularly true in sweeping historical dramas, and one of the codifiers of the genre is Les Misérables.

Director Tom Hooper (who also directed the Oscar-winng historical drama The King's Speech) sticks to the history of Les Misérables. Rather than a simple vehicle for Anne Hathaway, Hugh Jackman, and Russell Crowe, the movie is first and foremost the story of 1832's June Rebellion in Paris, which attempted to topple the July Monarchy of Louis-Philippe and establish a new French republic.

And that's the triumph of Les Misérables -- though the film features Jean Valjean, Fantine, the fanatical Javert, and adorable little Cosette, it's fundementally the story of the tumult of nineteenth-century France.

In 1830, a successful revolution brought about the ouster of King Charles X, the headof the House of Bourbon that had been restored as the ruler of France after the downfall of Napoleon, but the elected Chamber of Deputies, nervous about a new French republic, installed Louis-Philippe, the son of a deposed duke, as the new "King of the French" (as opposed to the "King of France" -- "King of the French" implied a popular mandate for the monarchy). This angered radicals and thousands of students, who were fed up with food shortages. harvest failures, cost-of-living increase and the government’s inability to halt an outbreak of cholera that killed 18,000 Parisians. Two smaller insurrections preceded the 1832 uprising. Thousands of students halted the funeral parade of Napoleonic general Jean Maximilien Lamarque in June 1832 and started the rebellion, battling royalist forces from behind hastily erected barricades. A few nights later they were overwhelmed by an army of more than 25,000 soldiers.

The story is a long one (they could easily cut out the dreary middle half hour) and a very sad one (though perhaps not as tragic as the Paris Commune of 1871, but that particular insurrection has been considerably less romanticized, at least in the West). But like so many tales of tragedy, it ends in the triumph of the human spirit.

Movies about revolutions often succeed because of their drama, tension and oversized characters. Veteran Hugh Jackman is marvelous as Jean Valjean, tossed into jail for five years for stealing a loaf of bread for his starving nephew and kept there a total of nineteen years before being released as a penniless, hateful pauper. Director Tom Hooper, who won an Oscar for his direction of The King's Speech, does a wonderful job of bringing out the deep characterizations of Hugo’s characters. He also gets fine work from Sacha Baron Cohen and Helen Bonham Carter as the malevolent Thenardiers and Eddie Redmayne as Marius, Cosette’s lover and one of the leaders of the uprising.

But many of the actors are miscast as singers (remember how Audrey Hepburn was overdubbed in My Fair Lady? No such luck here). Anne Hathaway, who simply can't sing, is dreadful as the anorexic prostitute Fantine. She butchers "I Dreamed a Dream," one of the best songs ever written. But Hathaway is stellar compared to Russell Crowe as Javert -- he's got to be the worst singer in the world (strange for man who fancies himself a rock star).

The absymal singing is a big reason why the movie's power and beauty lies in its history. The film opens the year Napoleon was deposed and tells the story of Valjean’s rehabilitation and flights from Javert. We learn much about French clothing, architectures, poverty, business, the rich, government and the penal system (thankfully, the playwrights behind the musical trimmed Hugo's chapter expounding on the history of the Parisian sewer system). The motivation(s) behind the June uprising -- particularly the reason why so many bourgeois students take to the barricades -- are nicely explored, as is the reason why the rebellion failed.

The best song is the rousing "Do You Hear the People Sing?" Their singing is the revolt. It’s good to know, too, that now, 180 years after the uprising and 224 years after the first French Revolution, we can still hear the people sing.