Secularization of America: Is the Latest Pew Poll Really a Big Deal?

Brent Nongbri is a Post Doctoral Fellow in Early Christianity in the Department of Ancient History at Macquarie University in Australia. He received his PhD in religious studies from Yale University in 2008. His first book, "Before Religion: A History of a Modern Concept," was published in December by Yale University Press. 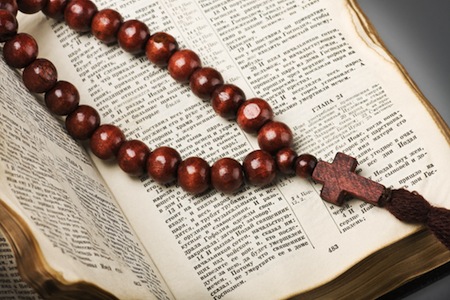 Bible and rosary image via Shutterstock.

When the results of a poll conducted by the Pew Forum on Religion and Public Life were announced in October, the term “secularization” was buzzing. Headlines declared that one in five adults in the U.S. have no religious affiliation. The New York Times suggested that the U.S. may be “simply following the trend toward secularization already seen in many economically developed countries.” The so-called secularization thesis, the idea that as societies modernize the role of religion recedes, has long been recognized as problematic (it was, in fact, declared dead in a famous paper by the sociologist Rodney Stark in 1999), but these poll numbers have suggested to some that reports of secularism’s death have perhaps been exaggerated.

From a historical perspective, however, the most interesting aspect of the debate is not whether it is true or false that religion is experiencing a resurgence and secularism a decline. Rather, what merits attention is the way the whole question is framed. Why do we talk about “secularism” and “religion” in this way? The terms themselves derive from Latin predecessors, which in the late medieval and early modern period referred primarily to different kinds of Christian clergy, those under monastic vows (religiosus) and those not under such vows (saecularis). How then have we come to think of religion as an ancient phenomenon whose turf is slowly giving way (or not giving way) to a modern phenomenon called secularism? Or, to rephrase the question: How much sense does it make to think that religion preceded secularism in the first place?

At first glance, the answer seems obvious. Across the globe in antiquity, the gods were involved in virtually all aspects of ancient life. Furthermore, ancient people clearly had vocabularies for distinguishing between sacred and profane, pious and impious, pure and defiling. In our common parlance, these binaries are often regarded as synonymous with “religious vs. secular.” Yet, closer attention to how the ancient classification schemes functioned shows that these dichotomies are clearly not equivalent to the religious/secular division. A temple was indeed a “sacred” space to an ancient person, but ancient temples had all sorts of functions -- as repositories for legal records, as meeting places for governmental bodies, as banks, markets, libraries, and museums that few modern people would regard as religious. Similarly, a number of words in ancient languages are regularly rendered by modern translators “religion,” but when we look closely at the contexts in which these words occur, it becomes clear that such terms refer to social interactions and hierarchies of all sorts, not only those that modern people would call religious. The Greeks, for example, recommended an attitude of eusebeia (piety) toward the gods, but they also used the term in reference to the proper attitude toward parents. The more time one spends with the ancient evidence, the more it becomes clear that it is not just secularism that is a modern phenomenon. Both sides of the religious/secular conceptual dichotomy are absent in the ancient world.

To get a handle on this somewhat counterintuitive assertion, I suggest turning to a somewhat counterintuitive source: Genesis 3:7. This verse recounts the moment when Adam and Eve’s “eyes were opened, and they knew they were naked.” Without ceding too much ground to our creationist friends, we may use this verse as an occasion to ponder how our own ancestors millennia ago, before the invention of the technology of clothing, thought about their bodies. From our modern perspective, it’s easy to say well of course they were naked. But could they have conceived of themselves as naked? It’s hard to see how. Neither nakedness nor being clothed were concepts until the creation of clothing introduced a binary, clothed/naked. So also religion and secularism were, as the anthropologist Talal Asad has put it, Siamese twins, born together in a particular historical moment.

The causes that brought that moment about are manifold, but in general terms we can point to sixteenth and seventeenth centuries as the era when a religious sphere of life, along with its secular partner, came into being. The simultaneous fracturing of Christendom due to the Protestant Reformation and the discovery of “new” peoples as a result of European colonial expansion created pressures that necessitated drawing new sets of conceptual boundaries. Violent power struggles in the wake of the Reformation threatened commerce, trade, exploration, and colonizing exploits. The legal codes of emerging European governments thus quelled the violence by establishing rules for tolerance of different beliefs about salvation and the divine. So long as these beliefs were privately held, spiritual, and non-political, they were to be protected by law and understood as “religious” (recall that beliefs were by no means protected or private when heretics were being burned at the stake, and the until the seventeenth century “spiritualitie” referred not to an “inner” state of mind but to the ecclesiastical hierarchy or its possessions). At the same time, then, the governments of these nation-states—and the “public” sphere itself -- were understood as secular, even if that public sphere was composed of citizens permitted to hold private religious beliefs.

In light of this understanding of the emergence of the religious/secular dichotomy, what do we make of the current secularization debate? If neither the “religious” nor the “secular” is a timeless entity, the Pew poll results would seem to be less about two abstract forces struggling for the souls of the nation and the world and more about differences of naming and classification. For instance, the “no religious affiliation” rubric of the poll includes those who identify as “spiritual but not religious.” To what degree does such a designation signal “secular”? It all depends on how we define our terms. At the end of the day, we may be better off focusing our energy and attention on that problem of definition -- who gets to define religion and what is at stake in defining religion in a particular way?