Andrew Seth Meyer is associate professor of history at Brooklyn College and the translator for "The Dao of the Military: Liu An's Art of War." 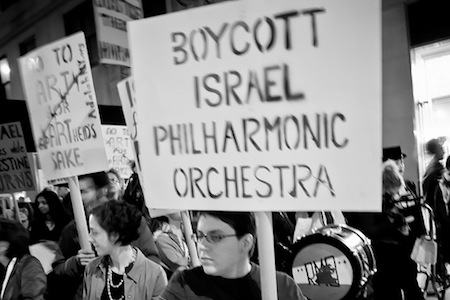 Next week Brooklyn College will be hosting an event planned by the B.D.S. movement, an activist group dedicated to encouraging "boycott, divestment, and sanctions" against Israel. The gathering is being co-sponsored by the Department of Political Science, and will feature Judith Butler and Omar Barghouti as principal speakers. Critics of the event have questioned the propriety of the involvement of the Department of Political Science, charging that their co-sponsorship amounts to the endorsement of political views that will be offensive or intimidating to some students.

As a Brooklyn College faculty member I feel obliged to defend my colleagues' decision. The issue of Israeli-Palestinian relations is complex and highly emotionally charged, but that should not place it beyond the realm of discussion. Moreover, the basic logic of the criticism hurled against the Department does not hold up to scrutiny. One could use the same arguments to protest against an invitation extended to, for example, Mitt Romney (what about the Democrats in the student body? won't they be offended/intimidated?), but the upshot of such arguments (if they prevailed) would be to deprive students of a unique learning opportunity.

That being said, I am moved, in the spirit of open discussion and debate that animates the planned meeting and in the interest of facilitating dialogue, to contribute to the conversation initiated by the event and its co-sponsors. In particular, I am intrigued by arguments put forward by Judith Butler that I anticipate will form part of the substance of her talk next week. In a 2003 article for the London Review of Books entitled "No, It's not Anti-Semitic," Butler (in response to remarks made by Lawrence Summers, then president of Harvard University) critically engaged the question of whether anti-Israeli views, "in effect if not their intent," could be deemed "anti-Semitic," arguing that they could not.

Butler's analysis is thoughtful and sophisticated, and I will not engage all of her points here. In general I agree with her that to equate "Jews" and "Israel" is false, and that criticisms of Israeli policy (even very vehement critiques accusing Israel of "apartheid") can not be deemed, on their face, anti-Semitic. But I would like to offer her and her supporters a counter-proposition, one that informs my world view and, I suspect, that of many other Jews (whether they are self-consciously aware of its principles or not). As my title suggests, my basic assertion is that anti-Zionism is, in fact, anti-Semitism. Unless she can empathetically and robustly engage this idea, she will have little hope of effective communication with the larger Brooklyn College community.

To begin this discussion, definitions are in order. As Butler notes in her article, Zionism over time has been a variable and internally contradictory movement. How then do we define Zionism and "anti-Zionism?" In simple terms, all historical Zionisms share the belief in the right of a Jewish state to exist. In the post-1948 era, this would translate into a belief in the right of Israel to persist as a Jewish state. Conversely, anti-Zionism would entail a denial of Israel's right to persist as a Jewish state. These definitions leave many open questions, as what makes Israel a "Jewish" state is the focus of constant and heated debate even within Israel itself. Lack of resolution on that score, however, does not deter us from understanding that an outright denial of the right for a Jewish state to exist has profoundly anti-Semitic consequences.

The arguments equating anti-Zionism with anti-Semitism do not hinge on the history of Zionism or of the Jews, but rather on that of anti-Semitism. If anti-Semitism had not evolved in very particular and pernicious ways, there is little chance that Zionism would have developed as it did, and its fruition in the existence of the Israeli state would have been virtually impossible. Traditional religious anti-Semitism was amenable to an array of escapes and remedies. On the one hand, conversion and assimilation could enable Jews to evade persecution, on the other hand, the advocacy of secularism and religious tolerance could create a social climate in which Jewish life was no longer threatened.

The advent of modern, secular anti-Semitism, however, created new and vastly more lethal conditions. "Jewishness" became an inescapable "racial" identity, one that could not be ameliorated by any degree of assimilation or religious apostasy. Atheists and Christian converts went to the gas chambers alongside the pious and the orthodox. In this new climate being Jewish is no longer entirely a matter of choice, subjecting millions to arbitrary attack and persecution whether they personally identify with the Jewish community or not.

This is the context in which the significance of Zionism and anti-Zionism must be contemplated. The question of who is a Jew and what it means to be a "Jewish" state is separable from that of whether the targets and victims of anti-Semitism can and do benefit from having a sovereign advocate in the community of nations. Wherever one falls on the former question, the answer to the latter question is emphatically "yes." Given the mechanics of international politics, if a Jewish state had existed at the time, it is unlikely that Nazi Germany could have perpetrated the Holocaust.

This principle is more than an abstract counterfactual -- it bears out in the experience of the post-1948 world. Even as Israelis have struggled among themselves over the personal and collective meaning of Jewish identity, Israel has served as a defender against anti-Semitism, broadly defined, all over the world. Jews in Yemen, Ethiopia, the Soviet Union, and throughout the globe have benefited from the military and diplomatic efforts of the Israeli state. Since its inception, Israel has been the single greatest impediment to institutionalized anti-Semitism in the international arena. The end of the Jewish state would, over time, remove concrete protections from Jewish communities throughout the world, and would create a more favorable climate for the growth and spread of anti-Semitism than has existed since before World War II. For example, those alarmed by the recent appearance of neo-Fascist groups in places like Greece and Russia might pause to imagine what greater scope those groups would have to grow in the near- and long-term in a world in which Israel did not exist.

This is the larger framework within which I and many other Jews approach any and all questions pertaining to Israel and Palestine, which does not preclude there being deep divisions over policy. I, for example, stand with the Palestinian people in demanding their right to statehood, and decry the injustice of the Israeli occupation, positions that Butler and the B.D.S. movement embrace and that many of my Jewish students and colleagues at Brooklyn College would reject. Where I and these latter individuals agree, however, is in our insistence that Israel must continue to exist, both for its own sake and for the protection of Jews everywhere. Any group seeking to engage a Jewish community largely animated and informed by this basic perspective on behalf of Palestinians would be well advised to clarify its position on how the crisis and occupation should or can be resolved. The only type of arguments that will achieve traction in the discourse I exemplify are ones that at least acknowledge the possibility of a two-state solution to the Israeli-Palestinian conflict. Anyone who advocates the necessary dissolution of the Israeli state, or is perceived to be evasively concealing such an agenda, will meet at Brooklyn College with poor prospects for a meaningful conversation that genuinely engages the larger part of the community.