Walter G. Moss is a professor emeritus of history at Eastern Michigan University. For a list of his recent books and online publications, including some on Dorothy Day, click here. His most recent book is "An Age of Progress? Clashing Twentieth-Century Global Forces" (Anthem Press, 2008). 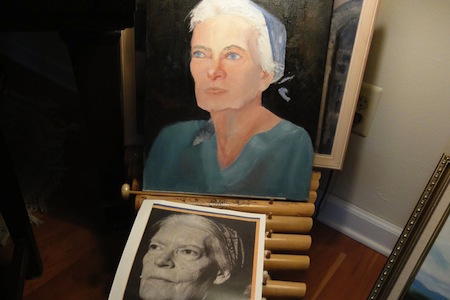 In words to news media people on March 16 the new pope, Francis, explained that he had chosen his name after the medieval saint Francis of Assisi. And it was primarily the saint’s commitment to peace and helping the poor that influenced him. Since the new pope seems to have a good sense of humor, he might appreciate the following irony: Although the Catholic Church he now heads bars women from the priesthood and his church is often accused of gender bias, the twentieth-century person who most forcefully embraced the ideals of St. Francis was a woman -- Dorothy Day.

What other person of the century spoke out and acted so forcefully and so long for peace and the poor? From the late 1930s until her death in 1980 she was a consistent pacifist and worker for the poor.

As Hitler’s armies rolled over parts of Western Europe, she wrote in June 1940 “‘And if we are invaded’ is another question asked. We say again that we are opposed to all but the use of non-violent means to resist such an invader.” True to her word, she opposed the U.S. entry into World War II even after the Japanese bombing of Pearl Harbor, as she did all future wars, including Korea and Vietnam. Opposed to all war preparations, she was willing to suffer for her pacifism. Beginning in June 1955, she was arrested every year for the rest of the 1950s for her annual refusal to take part in air raid drills mandated by the city of New York. During three of these years, she spent days or even weeks in jail, the most being in 1957, when she was sentenced to a month locked up.

In 1963 and 1965 she went to Rome in the interest of peace, the first time to thank Pope John XXIII for his encyclical Pacem in Terris, and the second to help persuade churchmen at the Second Vatican Council to take a strong stand against war. Directly or indirectly, John XXIII was probably influenced by her writings and activities. In his encyclical he wrote, “In this age which boasts of its atomic power, it no longer makes sense to maintain that war is a fit instrument with which to repair the violation of justice.”

Day’s work in behalf of the poor was an even greater part of her legacy. Beginning in 1933, in the depth of the Great Depression, she and her Catholic Worker (CW) co-founder, Peter Maurin (d. 1949), established Hospitality Houses, where needy persons regardless of religious beliefs received food, clothing, shelter, and other help.

Starting out slowly in New York, where separate houses for needy men and women were established, CW Hospitality Houses staffed by volunteers soon sprang up in other cities such as Boston, Cleveland, Milwaukee, Pittsburg, Detroit, Chicago, San Francisco, and Houma, Louisiana. Day estimated that, by the late 1930s, some 5,000 people each day, many in soup lines, were being fed by CW houses, with over 1,000 in New York alone coming in each morning for breakfast.

By World War II, there were about thirty Hospitality Houses nationwide, as well as one in England. Although opposition to her pacifism during World War II led to some wartime closings, after the war, the number of houses again gradually increased. Today, according to the CW website, a third of a century after her death in 1980, “213 Catholic Worker communities remain committed to nonviolence, voluntary poverty, prayer, and hospitality for the homeless, exiled, hungry, and foresaken.”

Day perceived a connection between her pacifism and aid to the poor, writing in 1966 of “war, and the poverty of peoples which leads to war, are the great problems of the day.” In that same article she mentioned that Michael Harrington, whose book The Other America (1962) helped spur President Johnson’s War on Poverty, had for two years been one of the editors of the paper run by her, The Catholic Worker.

Like the new Catholic pope, Day was also inspired by Saint Francis. In writing of Maurin (her co-founder and mentor), she noted that “Peter is always getting back to Saint Francis of Assisi, who was most truly the ‘great personalist.’ In his poverty, rich; in renouncing all, possessing all; generous, giving out of his heart, sowing generously and reaping generously, humble and asking when in need, possessing freedom and all joy.” She quoted Maurin’s line, “For a Christian, voluntary poverty is the ideal as exemplified by Saint Francis of Assisi.” And she herself embraced voluntary poverty, never earning enough to pay income taxes, and was happy to use her meager earnings to assist others.

She always lived simply, usually in New York in just a room in one of the CW Hospitality Houses. In 1942 she provided a glimpse of her life when she responded to a journalist who asserted that her Catholic Workers were pacifist sentimentalists and afraid of suffering:

Even before meeting Maurin in the early 1930s, she had been impressed by reading the following lines from William James’s The Varieties of Religious Experience(1902):

Poverty is indeed the strenuous life -- without brass bands or uniforms or hysteric popular applause or lies or circumlocutions; and when one sees the way in which wealth-getting enters as an ideal into the very bone and marrow of our generation, one wonders whether a revival of the belief that poverty is a worthy religious vocation may not be the transformation of military courage, and the spiritual reform which our time stands most in need of.

Among us English-speaking peoples especially do the praises of poverty need once more to be boldly sung. We have grown literally afraid to be poor. We despise anyone who elects to be poor in order to simplify and save his inner life. If he does not join the general scramble, we deem him spiritless and lacking in ambition. We have lost the power even of imagining what the ancient idealization of poverty could have meant: the liberation from material attachments, the unbribed soul, the manlier indifference, the paying our way by what we are not by what we have, the right to fling away our life at any moment irresponsibly -- the more athletic trim, in short, the fighting shape.

More than a century after James wrote these words and a third of a century after Day’s death, the new Catholic pope wishes to revive the spirit of St. Francis of Assisi. A skeptic might say, “Good luck with that.” Good luck with that in a world that seems as enthralled with consumerism as ever -- one critic has labeled shopping as America’s true religion. And as Peter Edelman emphasizes in So Rich, So Poor: Why It’s So Hard to End Poverty in America (2012) [reviewed here], “In a way we have not seen since the Great Depression, the rich and the powerful are adding every day to the bricks that make up the wall of their separation from everyone else.”

So what can the new pope do? Perhaps he can convince more people (including U.S. Catholic politicians such as Republican leaders John Boehner, Paul Ryan, Newt Gingrich, and Rick Santorum) to care, really care, about poor people and overcome the belief that poverty reflects a moral flaw. And if he really wishes to send a message about peace and poverty, about following in the example of St. Francis of Assisi, perhaps he could accelerate the canonization process of Dorothy Day. It has been almost exactly thirteen years since New York’s Catholic Cardinal John O’Conner announced that the Vatican had approved his request to consider Dorothy Day for sainthood. Think of sainthood what you will, disagree with Day’s absolute pacifism as you wish (and as I do), what more resounding message could Pope Francis send about peace and poverty than to declare her a saint?