Michael H. Hunt is Emerson Professor of History Emeritus at the University of North Carolina at Chapel Hill and author or editor of eleven books, including "Arc of Empire: America's Wars in Asia from the Philippines to Vietnam." 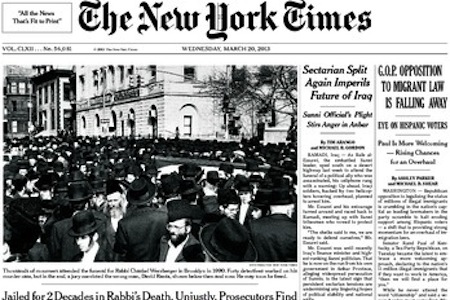 Talk about a gap between serious academic history and the policy community. The New York Times, which has made a big deal of the tenth anniversary of the U.S. invasion of Iraq, offers a stunning case in point. At least five different items in the paper for Wednesday, March 20, seek some perspective from “authorities” heavy tilted toward policy specialists and former Bush administration officials. There is nary a historian of any sort to be seen.

The paper’s editorial on the anniversary advances several startling propositions suggested by the U.S. experience in Iraq. These include getting our intelligence right, approaching decisions for war with an open mind. and understanding our regional influence is limited. Of course, nothing about how the press should guard against get rolled by the White House in the run up to war!

One of the David Petraeus acolytes, John Nagl, offers an op-ed that adds an additional deep insight: war holds surprises so military leaders need to be flexible. Unfortunately nothing more profound can be expected from a counter-insurgency camp whose use of history over the years has been at best tendentious.

David Sanger’s report on the lack of consensus on lessons learned features extensive quotes from ex-Bush officials offering predictable justifications. Sanger clearly has no historians in his Rolodex so what he reports comes from the echo chamber that is the policy world.

Five experts jump into a debate over whether removing Saddam Hussein was a good idea. No card-carrying historians of Iraq, the Middle East, or U.S. foreign policy in this mix.

Perhaps the most revealing piece is Peter Baker’s treatment of Washington’s relative silence on the anniversary. He notes that the capital, like the country more generally, “seems happy to wash its hands of Iraq.” The real lesson learned, his piece suggests, is to forget wars that don’t go well. Just celebrate the ones you win. Forgetting may already be a sturdy feature of the American way of war. Silence followed the aftermath of the conquest of the Philippines, the frustrating war in Korea, and the Vietnam War (at least for a decade).

Anyone in the lesson business who wants to ignore history does so at their own peril. As any historian worth their salt will tell you, assessing a war just ten years gone is very difficult. Not enough time has passed for dispassionate perspective; partisanship and wishful thinking are still strong (a point that Times inadvertently drives home). Moreover, the evidence on which any compelling judgment depends is thin; it will take years for the historical record to become full enough to tell us with confidence who did what to whom and why.

But along with these cautions historians would make an additional point. The past is always helpful in setting context, and it is indispensable in cases so close to the present and so poorly documented as Iraq is. How did U.S. involvement in the region help set the stage for the Iraq imbroglio? Were there long-term forces or preoccupations in play that may have helped drive U.S. policymakers toward their decisions? What other wars offer parallels with Iraq that might be revealing? What long-term developments internationally and at home might have facilitated or obstructed the march to war?

Historians pursuing these kinds of questions can shed badly needed light on important issues otherwise for the moment necessarily obscure. Perhaps here’s the issue the Times staff might have explored: how can history serve as a resource to help us understand Iraq and our role in the world more generally?